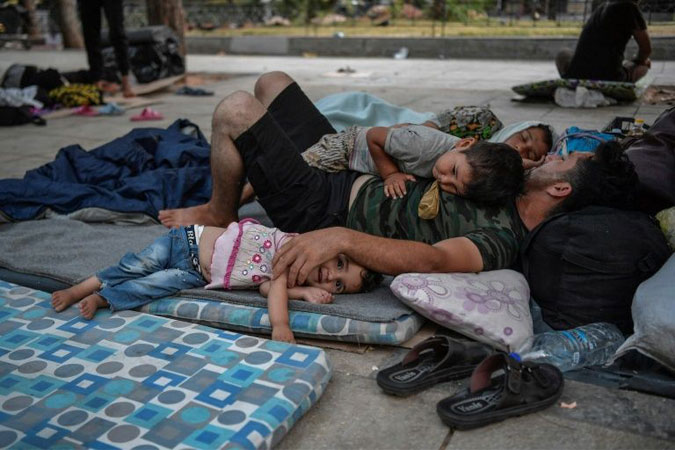 When Amir Hussein was finally allowed to leave the horrific migrant camp of Moria on the Greek island of Lesbos, it was supposed to be the end of a year-long odyssey.

“After (experiencing) hell in Moria, we had not expected to find ourselves on the street in Athens,” says the 14-year-old Afghan boy, who has been sleeping on central Victoria Square for the past week.

Around 100 mostly Afghan refugees have been camping in the square in recent days under temperatures exceeding 30 degrees Celsius (86 Fahrenheit).

Amir, his parents and two siblings aged 2 and 7, were awarded asylum over a month ago, at which point they were allowed to leave Moria and sail to Athens.

“The camp authorities told us to leave Moria. But we were not told where to go, where to find assistance,” he told AFP.

A new Greek law on asylum has slashed the time refugees are allowed to stay in camps or UN-managed accommodation after securing state protection to just a month, from six months previously.

The government says this was necessary to reduce chronic overcrowding in the camps.

More than 26,000 people live in camps on the five Aegean islands of Lesbos, Samos, Chios, Leros and Kos that were originally built to handle just 6,095.

Emergency benefits are also discontinued after a month, with refugees now nominally entitled to apply for Greek tax and social insurance numbers, and find work.

Refugee support groups note that although this is technically true, in reality applicants face insurmountable difficulties, including xenophobia.

“We need a tax number to rent an apartment, but we cannot get one without a permanent address,” said Sina, an 18-year-old Iraqi who would normally be in university.

“We are facing an absurd bureaucracy with no one to help us,” he added.

The country was recovering from a decade-long debt crisis and jobs were already scarce before the coronavirus pandemic, which is expected to bring additional layoffs.

“Our financial assistance was severed as soon as we secured asylum,” said Farsila, a single mother with a five-year-old girl.

“We don’t have enough money to rent an apartment, but neither can we stay by ourselves on the street, it’s too dangerous,” she explained.

Refugees with precarious incomes say they also face reluctance from Greek landlords when they seek to rent lodgings on their own.

“When we can, we spend a night in a hotel. But our money is running out and it’s very hard to find work,” said Sina, who has been in the capital for the past three weeks.

But at most the scheme can assist only 3,500 people at a time.

Marine Berthet, a medical coordinator for the MSF charity, says the homeless include people with serious medical conditions, as well as pregnant women sleeping on the ground.

“In the middle of a global (coronavirus) pandemic, governments should protect people at risk, not throw them on the street,” she said.

Fariba, a 24-year-old from Kabul, says Greek police came a few days ago to relocate them.

“They wanted to take us to a closed detention centre. We did not want to go, it’s not an appropriate place for families,” she said.

More than a million migrants and refugees arrived in Greece in 2015 and 2016, according to the UN refugee agency. There are now around 120,000 in the country.

The city of Athens has announced plans to shelter 500 homeless refugees in cooperation with the International Organisation for Migration.

Fariba says it was terrifying to live with her 14-year-old brother for nine months in the notorious camp of Moria, where knife killings are common.

“Every night, I was gripped with fear because of the fights. I thought that once in Athens, I would have a better life,” she said.