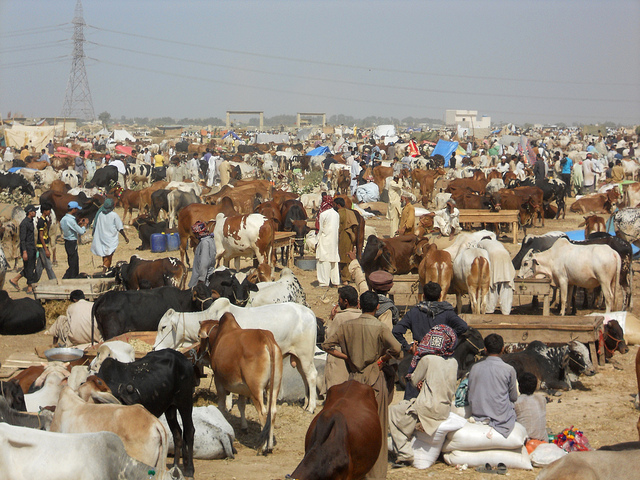 KARACHI: Waking up the whole night and looking after the sacrificial animals, sitting around every nook and corner of the streets and nearby parks, roaming around the city watching beautiful and expensive animals which are kind of put on a show was the feel of Bakra-Eid in Karachi but this year all of this has come to standstill with not even half of the happenings.

One of the biggest festivals of the country ‘Eid-ul-Azha’ is about to hit the ground but the situation is not just different from each year but also very unpredictable.

Since February 26 when the first case of COVID came, the country has seen many ups and downs and now when things are getting better and cases are going down with almost 28,000 active cases in the country till Monday 27 July.

With the country coming to new normal malls, markets, restaurants, and almost everything opening back after almost five months lockdown, the situation at Mandi is nothing different. It was allowed to set up sacrificial mandi with specific SOPs all over the country. It was timed instead it was opened 24/7 until last year. The biggest sacrificial mandi of Asia which is set up at Karachi Super Highway on an area of 900 acres which includes total of 48 Blocks and has been divided into 16 Vip blocks and 32 general blocks.

The mandi has seen it worse this a year with specific timings to be followed which is why it has seen less visitors because people have prioritized buying animals from small mandis set up in the city than going to the main mandi with all the SOPs.

Even the city has seen fewer animals this year with most of the people following the instructions of the Government to get their holy sacrifice to be done in Masjids. “There used to be at least 20-25 animals in this park every year but this year as you can see there are hardly 10-12 even when Eid is around the corner,” said Obaid Ullah while cleaning his own sacrificial cow.

Such cases are every nook and the corner where either people have participated in sharing based Qurbani in masjids or any other organization or they have donated the money to poor.

“We have bought our cows and goats 15 days ago but we didn’t bring them home, we have them at a friend’s farmhouse which is near to the superhighway and all of it is due to COVID because we fear the social distancing and spread of the virus,” shared another the enthusiastic young man who is fond of Bakra Eid.

The city has been experiencing rain spells which can also make a mess of the festival with stagnant water and spreading virus. “People should opt for slaughterhouses as the District offices have set up,” shared a district commissioner in Karachi in his press conference a few days ago where he announced that people should perform the holy ritual at slaughterhouses and save the city from uninvited untidiness. He also mentioned that it is not possible to implement 100% the slaughterhouse system but the administration will make sure to keep the city clean from all the waste of the slaughters happening around the city.