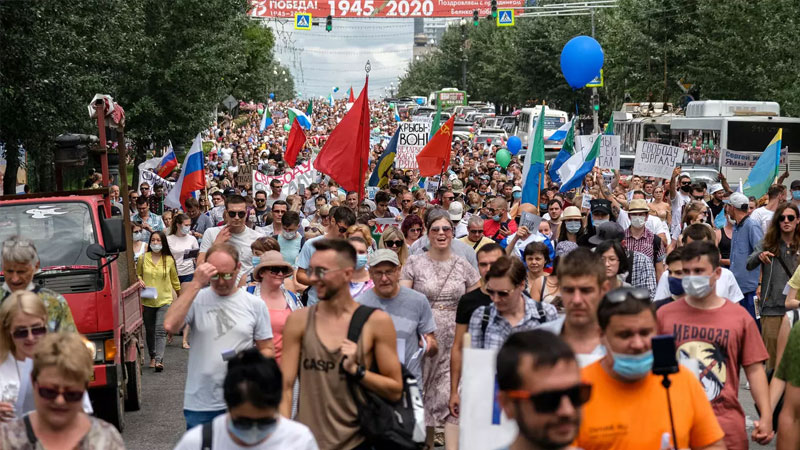 Huge anti-government demonstrations erupted in Russia’s Far East on Saturday over the arrest of a popular governor who was replaced this week by a Kremlin appointee who never lived in the fraught region.

Residents of Khabarovsk near the border with China took to the streets en masse for the third Saturday in a row after governor Sergei Furgal was arrested by federal law enforcement and flown to Moscow on murder charges this month.

The running demonstrations have been some of the largest anti-government protests in Russia in years, which the Kremlin said this week were being fuelled by opposition activists outside Khabarovsk.

Tens of thousands of residents marched through Khabarovsk waving the region’s flag, carrying banners and chanting slogans against President Vladimir Putin as passing cars honked their horns in support.

“We want our governor to be released because we believe he was very likely detained illegally,” said 24-year-old protester Alina Slepova.

Furgal was removed by federal officials “for their own purposes, not for the good of our region,” she told AFP. Demonstrators converged in front of the regional administrative building on Lenin square shouting “Freedom” and “Putin resign”. Police wearing masks allowed the demonstrations to go ahead despite a ban on public gatherings as part of measures to contain the coronavirus pandemic.

The protests that erupted in response to the shock arrest of Furgal over murders that happened 15 years ago are increasingly becoming an outlet to vent frustration with the Kremlin. “The centre is sucking resources from the Far East,” said demonstrator Alexander Gogolev, 45, who voiced anger that the region receives “nothing in return”.