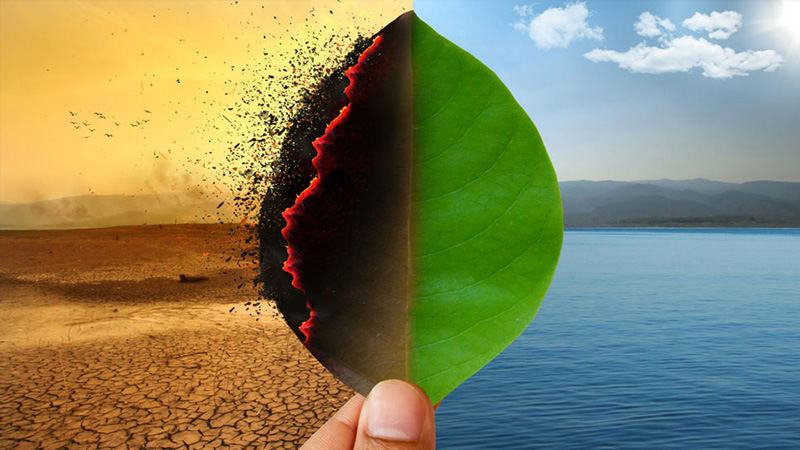 Climate change and coronavirus have much in common. They are both invisible threats to humanity. Warnings of their inevitable onset by scientists have largely been ignored. At their worse, they can lead to substantial loss of human life and exacerbate the inequities present in our world.

Coincidentally, coronavirus has also revealed climate change’s kryptonite: lockdown. Coronavirus’ induced coma on economies and lives throughout the world has brought a new sense of awareness on life without pollution. Before and after pictures of skylines in Manhattan, New Delhi, Beijing, and cities across the world pervaded social media platforms. As governments ushered citizens into their homes, industries and businesses shutdown, airlines were grounded and oil demand plummeted, carbon emissions fell drastically.

According to a paper in Nature Climate Change, daily global emissions were 17 per cent lower in early April than for the same period of 2019. In the US, emissions of carbon dioxide are forecast to drop 7.5 per cent this year, according to a recent government estimate. In the EU, daily emissions have fallen 58 per cent compared to pre-crisis levels, according to the French consultancy Sia Partners. Global levels of nitrogen dioxide have hit a record low, according to the Centre for Research on Energy and Clean Air. Less coal burning in China in February alone has already avoided the equivalent of the annual emissions of a small European country.

However, the victory against climate change was short lived. As economies reopen, emissions have accelerated to their pre-lockdown levels. Post-lockdown, levels of air pollutants across China reached concentrations above the same period last year, according to the analysis by the Centre for Research on Energy and Clean Air. And unfortunately, the worst is yet to come. Governments are eager to kickstart their economies at any cost; China is prepared to burn as much coal as required and so will countries where it has invested in coal-based power plants i.e. Pakistan. China approved more coal-fired power plants in the first three weeks of March than it did during the whole of 2019, according to data from Global Energy Monitor.

Is all hope lost if we are going to return to business as usual?

Coronavirus has reaffirmed the truth behind the Persian adage ‘This too shall pass.’ The ephemerality of daily practicalities and agendas previously considered essential has never been clearer. Deliveries that were supposed to be made in March were delayed to April. Business travel for that critical meeting was paused and had to be settled, after some weeks, via a second-best Zoom call. Ambitious students sitting for exams and wide-eyed graduating students ready to enter the workforce were told the next step in their life can wait. Collective action was at the heart of our response to the pandemic and everyone played their part to stem the spread of the virus. If, like me, you have renewed sense about the delicacy of our plans, and if you realized that the strongest opponents require a team effort, then it is worth taking stock what we as a team Earth and its denizens are willing to do to fight climate change?

Therefore, I propose carbon-pausing as a policy measure to tackle global warming: real-time monitoring of carbon emissions via satellites and energy-tracking emissions to ensure that countries are on track to meet emission targets. If a country is predicted to fail in meeting its targets, emission lockdowns should be imposed for a period that will help the country get back on its approved trajectory. Airlines and industries would be halted just like during the pandemic and emissions will be decreased via shock therapy. Naturally, an ideal solution would decrease emissions without such a shock, but the deterrent of being subject to such an aggressive measure would serve as an incentive for governments, businesses, and most importantly, citizens to live a greener life. The same incentives we have when we practice social distancing to prevent a second coronavirus wave.

Many of us are guilty of having underestimated the pandemic – it’s just in China, it only affects older people, it’s the same as influenza, wash your hands and you’re safe were common manifestations of denial. We must not let the illusion of climate change as an invisible enemy deceive us. Climate carcinoma is spreading to all organs: South America, Europe, Asia, and the Gulf of Mexico have had their warmest year to date; May 2020 tied with 2016 as the world’s hottest year on record. The power of collective action has been instrumental in slowing the pandemic. The same will be needed for climate change.