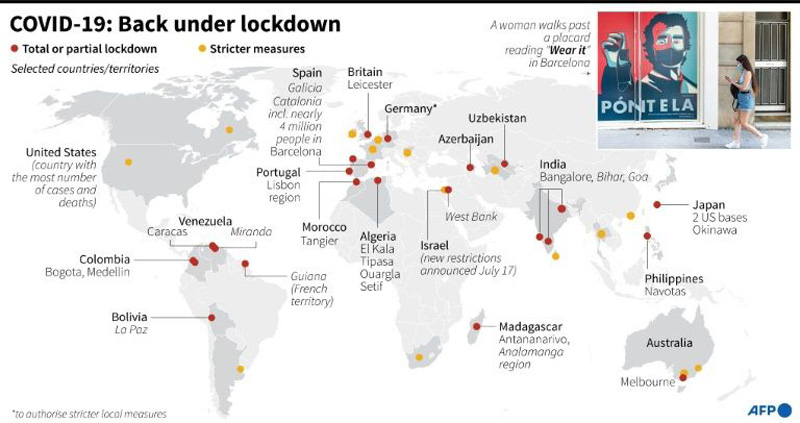 EU leaders battled to save a beleaguered 750 million euro ($860 million) virus recovery package at a summit on Sunday, as global deaths soared past 600,000 and Hong Kong raised the alarm about its growing outbreak.

The United States — the worst-affected country by far — ended a week in which it registered its highest figures for new cases for three days running, taking its total towards 3.7 million infections and 140,00 deaths. The virus has now infected more than 14 million people worldwide.

With clusters cropping up from Spain to Australia, officials were again facing the dilemma of imposing lockdowns to protect public health or loosening restrictions to save struggling businesses.

Illustrating the shrinking room for manoeuvre, angry demonstrators took to the streets in Israel to protest against their government’s handling of the crisis.

And scientists too were feeling the pressure, Britain ramping up its tit-for-tat row with Russia on Sunday over claims Kremlin agents hacked into British labs where virus vaccines are being developed.

Economic recovery is at the forefront of policymakers’ minds in Europe, with the continent facing a crippling recession and still unable to agree on the terms of its massive package to help the most-affected countries.

“I still can’t say whether a solution will be found,” said German Chancellor Angela Merkel as she headed into the third day of an extraordinary summit on Sunday.

“There is a lot of good will… but it may also be that no result will be achieved today.”

The summit with all 27 EU leaders was supposed to frame the terms of the rescue deal but a handful of countries led by the Netherlands are reluctant to hand over such vast sums to nations they regard as profligate — particularly Spain and Italy.

There was disunity, too, on the fringes of the EU, with Britain and Russia renewing their feud over Moscow’s alleged spying on British scientists.

“We’re absolutely confident that the Russian intelligence agencies were engaged in a cyberattack on research and development efforts in organisations in this country,” said British Foreign Secretary Dominic Raab, echoing accusations made by several countries earlier this week.

Russia’s London ambassador dismissed the claim, saying “there is no sense in it”, adding: “In this world, to attribute any kind of computer hackers to any country, it is impossible.”

With tens of thousands of new infections each day and hundreds of deaths, the US is struggling to frame a consistent response to the crisis — attempting to open up the economy even while the tolls mount.

Other nations are grappling with the same dilemma, Spain opting for local lockdowns and non-enforced stay-at-home advice in its Catalonia region.

Officials in the Australian state of Victoria have taken a tougher approach. Facemasks will be mandatory for roughly five million people in and around Melbourne from Thursday, with the threat of $140 fines for transgressors.