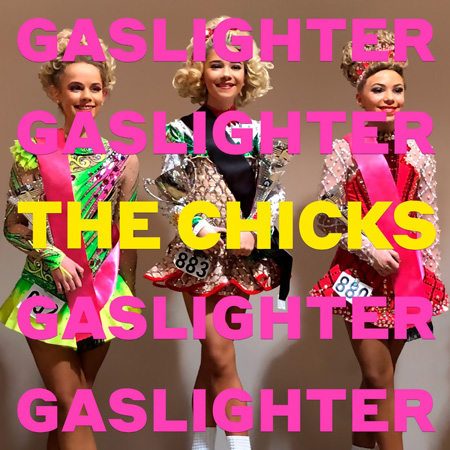 In a long-distant era of discord suspi-ciously similar to our own, Natalie Maines, the singer for the group that was, until last month, known as the Dixie Chicks, lit a forest fire with an offhand insult about George W. Bush in 2003. Since then, she’s owned her political words more deliberately by laying into Donald Trump on social media, not onstage.

But listening to her now, all you can think is: Man … they got off easy. Because on the newly renamed Chicks’ first album in 14 years, Maines savages her ex in ways that make it seem as if she were mincing words or pulling punches back when she was taking on mere presidents. She’s got your civil war right here: “Gas-lighter” might count as the boldest and most bracing entry ever in popular music’s long and storied history of divorce albums.

When the collection’s title was first announced, some fans mindful of Maines’ political leanings may have been led to think it would be a musical op-ed. It fulfills that just once, in the song “March March,” which name-checks Emma Gonzales and her anti-gun-violence youth brigade, and which only glancingly references the president (ours, and Russia’s) with the pointed punchline, “What the hell happened in Helsinki?” Otherwise, though, it’s a different fresh hell Maines has on her mind.

The marital theme is established right off the bat with that title track, which eschews any topical connotations in favor of some-thing closer to the 1940 film “Gaslight,” in which a woman becomes aware her hus-band is trying to drive her insane. The bus-tling, harmonically layered music for this thematic overture — co-written and co-pro-duced, like the rest of the album, by Jack Antonoff (Taylor Swift, Lorde) — is almost absurdly cheerful. Don’t get too used to it: the mood will come to match the subject matter.

In their post-“incident” songwriting, the Chicks have had a way of making things so personal, going into such confessional or confrontational detail, that it can amount to the musical equivalent of breaking the fourth wall. That was certainly the case with 2006’s Grammy-winning “Not Ready to Make Nice,” which you could take either as a first-hand account of her divorce from the mainstream country music community or a universal anthem for anyone who has a good reason for not letting go of a grudge … at least up to a point. When it got to the chilling bridge, where Maines let go of any pretense of universality and just started wailing about being told to “shut up and sing” and getting death threats, it was a jolting reminder that this was her story, not ours, even if we related to the other 90 percent.

Now that Maines is writing lyrics about an actual divorce on “Gaslighter,” there are a lot of those same startling, wall-breaking moments, where the autobiographical particularity might take you out of the song for a few seconds before the bluntness draws you ineluctably back in.

Listeners already got a pretty good taste of that when the title track was released in March, with its crazy-making marital generalities rudely interrupted by the now-famous line “Boy, you know exactly what you did on my boat.” It was the post-country-pop equivalent of Beyonce throwing out that crumb about “Becky with the good hair.”

Maines isn’t content to let things rest at that elliptical a level, though. And so, right after the title track has opened the album, the Chicks move right on to greater levels of anecdotal unloading with “Sleep at Night” (as in, “How do you…”), with the recounting of an encounter with an Other Woman that apparently occurred when the group played L.A.’s most storied venue four years ago.

“Remember you brought her to our show at the Hollywood Bowl,” Maines sings, ruefully recalling her naivete. “She said, ‘I love you, I’m such a fan’ / I joked that you can love me as long as you don’t love my man / There’s nothin’ funny about that.”

Oh, and the boat? All is explained — or enough is — later on in a song with the spoiler-ific title “Tights on My Boat.” (Looking at it again in Bey terms, it’s almost like “Becky’s Hair: The Album.”)

If her ex, Adrian Pasdar, were a singer-songwriter, too, maybe we’d get an interesting response record out of him. Since he’s not, it may be useful to remember that we’re only getting one side of a 20-year story in “Gaslighter.” But it’s a whale of a tale, with Maines making for such a transfixing firebrand that it might take a second listen to register how devastatingly she conveys deeper levels of hurt. In other words: Come for the comeup-pance, stay for the vulnerability.

Back-to-back tracks deal with the effects of a split on kids — “Julianna Calm Down,” a song of encouragement that gets around to naming all of the children of Maines and bandmates Emily Strayer and Martie Maguire, followed by “Young Man,” which urges Maines’ son to “take the best parts of” her ex and “leave the bad news behind.”

The record returns to first-person aches at the close with “Hope It’s Something Good” (“Twenty years of hanging on / Now it all adds up to nothin’…/ I hope she’s something good”) and “Set Me Free,” which is your everyday, average pop ballad about urging an ex, in the most anguished terms, to just sign off on the damn paperwork. On these final numbers, Maines’ famous sideman father, Lloyd Maines, slides in with subtle, soothing steel guitar, much as a dad might try contributing quiet solace in real life.

Maines brings her musical sisters into it in “My Best Friend’s Weddings,” in which she autobiographically recounts meeting her ex at Emily Strayer’s first wedding two decades ago, then happily attending the banjo player’s second vows and taking comfort in saying she’s “never seen her more happy,” even as she’s nursing her own wounds and vowing to “go it alone.”

Not everything is quite so scene-specific. “Everybody Loves You” is a cover of a ballad by singer-songwriter Charlotte Lawrence (who performed with the Chicks at that fateful Hollywood Bowl show mentioned in “Sleep at Night”), an angry look at how the bete noire in one’s own domestic life can be a charmer to the rest of the world, and questioning whether to fill them in. (Obviously Maines resolved that for herself.)

It does move out of splitsville into the importance of forming a more perfect union — the union that all women could, or should, share, or maybe the advice that an older woman would give to her younger self, as explored in the feminist/selfhood-reclaiming anthem “For Her.” One of the more delightful slow burners on the album, “For Her” takes its time in letting Maines’ up-close-and-personal vocals percolate over just the old-school R&amp;B feel of Antonoff’s Wurlitzer electric piano before building into a tasteful version of a gospel climax.

The one truly frisky track, “Texas Man,” is the closest thing the album has as a successor to “Cowboy Take Me Away,” in spirit, if not its eccentric sound. Although that classic oldie was aspirational in its romanticism, “Texas Man” is about a post-split Maines having moved on to at least be ready to play rough again: “It’s been way too long / Since somebody’s body was tangled with mine… / Everybody wants top market / But I’m a little bit unraveled / Everybody wants the new model / But I’m a little bit more traveled.”

It’s spirited and playful in a way that fans of the group’s earliest hits will probably wish there was more of here, and hits that sweet spot even though Antonoff is determined here more than anywhere else on the album to take things away from a strictly roots sound, with acoustic instruments that are plucked in an odd enough way to sound sampled and Annie Clark, aka St. Vincent, adding some trademark fuzz-guitar licks. Its increasingly aggressive groove is an example of what Antonoff can pull off as a master pop craftsman who isn’t afraid to blend organic and synthetic sounds.

Aside from a few such more adventurous tracks, though, Antonoff plays it more conservatively, to the point where most of the album isn’t an extreme departure from where Rick Rubin left off with them on their last album 14 years ago. Strayer’s banjo and Maguire’s fiddle are still played as lead instruments, even if they’re playing licks that skew to pop as much as country or roots music.

The most remarkable thing on the production end of the scale, ultimately, ends up being how magnificently Maines’ voice is mic-ed on the more intimate numbers. It’s one of the most expressive voices we have in popular music, reminding us that country radio’s loss has been much of the wider worlds gain — to the extent that she’s let anybody hear her very recently. And her producer knows when to leave a tender moment alone — or a ferocious one, too. Rather than impose an excess of ear candy (although it’s welcome on the few occasions in which it comes), Antonoff knew what he had on his hands here: an album in which each new incendiary lyrical moment seems to top the last, before grievance gives way to beautiful grief. Candor, take them away.