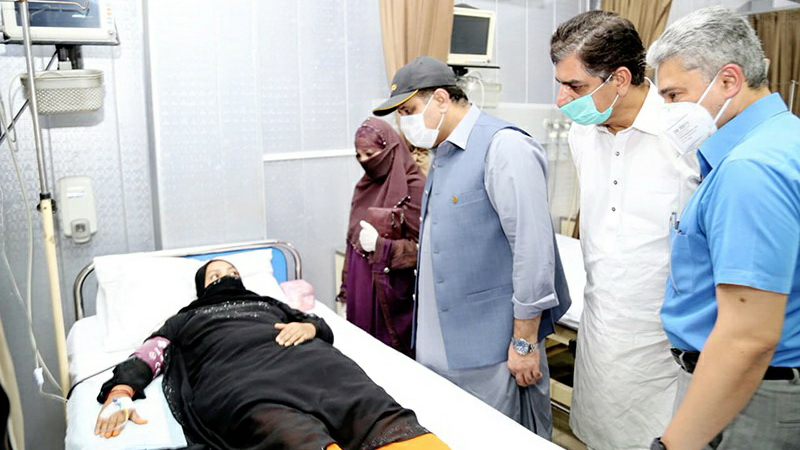 The steps taken for overcoming coronavirus are proving useful and virus’s spread is decreased due to smart lockdown, Punjab Chief Minister Sardar Usman Buzdar in a statement issued here on Tuesday.

“Meanwhile, the holding of the NCOC meeting in Lahore has promoted the passion of national unity and this forum has also strengthened concord among federal and provincial governments.”

The CM deplored that opposition left the affectees alone while engaging itself in point-scoring adding that nefarious designs of those occupied in negative politics have been fully frustrated. The whole world has appreciated the strategy employed by Prime Minister Imran Khan to overcome this pandemic, he said. The number of corona patients has been sufficiently decreased in Punjab. Similarly, the number of recovered patients is increased, he added. However, it is imperative to follow SOPs on the occasion of Eidul Azha to control further spread of this virus, the CM concluded.

The CM assured them to early solve their constituencies related problems and reiterated that MNAs are his companions as like the MPAs. Elected representatives have been consulted for development projects and early completion of ongoing schemes is the priority of the government, the CM told. He maintained the PTI government is rectifying the misdeeds of the past as the country was deviated from its real destination due to wrong policies of former rulers. Animosity was shown by wasting national resources on exhibitory projects and the public problems were ignored, he said. He added that the PTI government has focused on solving public problems and composite development is an important agenda of the government. New Pakistan belongs to the common man, he asserted. He further said the government believes in performance and a new example has been set by introducing holistic reforms in different sectors.

Chief Minister Punjab Sardar Usman Buzdar inspected Rs 9 billion worth Nishtar Hospital-II project in Multan on Tuesday. 91 per cent of the initial construction work has been completed and related work is in progress speedily. The 500-bed hospital will be built in the first phase and as many beds will be added in the next stage along with medical staff’s residences while the medical university and nursing college will be constructed in the third phase. The CM directed to expedite the pace of work as the new facility will provide the best treatment. It was the right of the southern Punjab which is being given to them, he added.

Later, the CM visited Multan Institute of Kidney Diseases (MIKD) and inquired the patients about the medical facilities. Talking on this occasion, he said that MIKD has been fully activated by the PTI government adding that 110 dialysis machines will also be provided to it. Similar, kidney transplantation project will be completed in collaboration with a British hospital. The child patients will be provided with best treatment facilities. I will get completed healthcare projects in my supervision and no negligence will be tolerated in this regard, he assured.

Chief Minister Punjab Sardar Usman Buzdar has taken notice of murder of a girl child in Butter Dogran, a suburban village of Sialkot and sought a report from RPO Gujranwala. He asserted that the killers will not escape from the grip of the law and the bereaved family will be provided justice at every cost. Moreover, the police have arrested accused Ahtisham alias Mani and Muhammad Faiz and started further investigation.