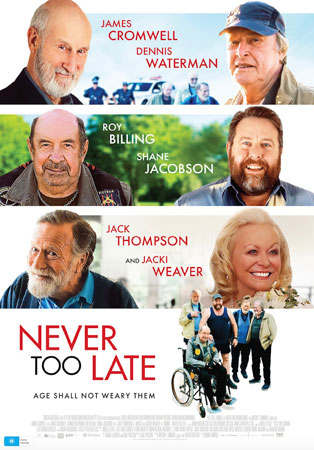 Four Vietnam vets reunite for a mission, one that will lean on their wartime exploits but also expose more than a few old tensions. No, this is not a revisit of “Da 5 Bloods” but a brief description of the genial, cliche-encumbered, Aussie comedy “Never Too Late.” Directed by Mark Lamprell, it opens in virtual — and a few actual — cinemas nationwide on July 10. Wily and determined, former special forces soldier Jack Bronson (James Cromwell) arrives at the Hogan Hills Retirement Home for Returned Servicemen and Women looking the worse for wear. He’s in a wheelchair and appears to have had a stroke. The facility’s ramrod director Lin (Renee Lim) admits him. After he’s taken to his new abode, we learn that decrepit act was subterfuge. He’s there to reconnect with the love of his long life, Norma (Jacki Weaver).

It’s Norma’s voiceover that starts the movie off, recounting the war, the fall of Saigon, Jack’s role as the leader of the Chain Breakers, the quartet of POWs who’d escaped their captor. She was a combat nurse. “Sometimes it takes a lifetime to find a happy ending,” she says. Leaping 50 years forward, the story underscores that sentiment. Almost as soon as Bronson finds Norma, she’s whisked off to a much swankier facility for a three-month drug trial for Alzheimer’s. Bronson snuck in skillfully enough. Getting out — breaking out — will be harder. When he learns his old Chain Breakers mates are in the same retirement home, he enlists them in his plan to get to Norma yet again. Only he doesn’t quite come clean about the facts of the mission. The idea that Bronson arrives at the facility unaware his three mates reside there seems to imply (rather lazily, given the character’s special ops training) that there’s been, if not outright estrangement, at least a slow parting of the ways. Still, Bronson rallies them. Yes, his old friends have lost some giddy-up. Well, Caine (Dennis Waterman) still has a measure of prowess. But Angus (Jack Thompson) is experiencing memory loss, and Wendell (Roy Billing) has alienated his grown son Bruce (Australian star Shane Robertson) so much that the letters he sends boomerang unopened.