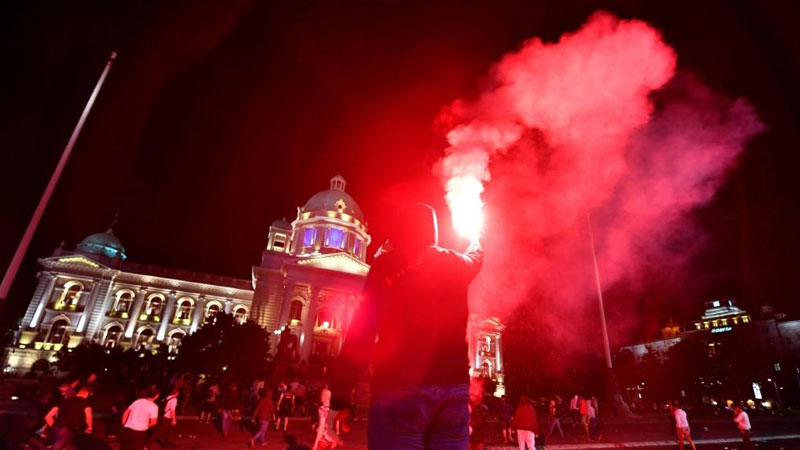 Serbia’s president said Wednesday that a weekend curfew to combat a resurgence of coronavirus infections might be scrapped after the measure sparked angry protests that ended in clashes with police. Chaotic scenes rocked Belgrade Tuesday night after thousands of people streamed into the city centre to protest the president’s announcement that authorities would reimpose a round-the-clock weekend lockdown. Around 20 people were arrested and dozens were injured in running battles between police, who used tear gas, and protesters who stormed into parliament, threw rocks at officers and were accused of setting police cars alight. Their outrage focused on President Aleksandar Vucic, who critics accuse of inviting a second wave of coronavirus infections by rapidly lifting initial lockdown measures before an election in June. His party won the poll by a landslide in a vote boycotted by the main opposition. In an televised address, Vucic said he was still in favour of a curfew but that a government crisis team would “decide tomorrow”. “There will definitely be tightening the measures for Belgrade,” he said, adding that the “crisis team seems to think that there should be no curfew”. “It would be shameful for me to go back on my words under pressure from hooligans, but I think we are showing our strength by showing that I do not decide alone,” said the 50-year-old, who is accused of authoritarian control of Serbia despite holding what should be a ceremonial post. He branded the protesters as “fascists” and said there were suspicions of “meddling of foreign intelligence”, without providing any evidence. Vucic also conceded that some police officers, who were accused of excessive force, “failed” and that they would be held accountable.