Poor George Perry Floyd, an ordinary 44 years old a black American national, accused of a petty crime, has very extremely barbarously and inhumanly been killed by none but a policeman in Minnesota on 25th May which simply cannot be properly condemned by whatever the words and expressions one can find in any dictionary howsoever voluminous it could simply because it has never ever happened alike before and it should also not be repeated whatsoever and howsoever serious an offence may have been committed.

Honestly speaking the whole scenario right from its very start till the end shall have to be very seriously, diligently and professionally be studied and investigated in much depth from different varying angles and perspectives to pinpoint deficiencies and lacuna found as of today so as to either suitably amend the existing rules and procedures and or introduce new set of rules and regulations whatever deemed necessary in the greater interest of not only for Americans as one may think alike rather considering the humanity as a whole.

It is alleged that George bought a packet of cigarettes and gave a US$2 bill towards its payment which the shopkeeper took as a counterfeit so he had to inform the police but it gives birth to some worries as well. First, George is found as a deep addict of cigarettes to the extent that being under great compulsion he had to smoke which he could not avoid otherwise but at the same he faced a big problem as well because he had no money except a fake $20 currency note which he gave to the shopkeeper from whom he took cigarettes and thus the problems started. Now not only the government but also all NGOs, charitable societies, voluntary organizations, teachers, preachers, scouts, girl guides and volunteers, both men and women, must embark upon a national awareness program throughout the country highlighting how dangerous an addiction could be be it tobacco or wine or drugs etc. Flyers with George photos and messages saying that nothing but cigarettes took away his life must be distributed to each and every one on the streets. Sign boards with the same message be erected on highways as well.

Next comes the question of fake currency note itself which, as such, gives birth to so many very relevant, pressing and urgent questions to be honest

Next comes the question of fake currency note itself which, as such, gives birth to so many very relevant, pressing and urgent questions to be honest. First and the foremost question is to ascertain with hundred percent surety devoid of even the slightest shadow of any doubt whatsoever that the bill under the reference was really a fake one or not? What action to be initiated and against whom, the shopkeeper or police or both, if the bill was found to be truly genuine and not fake at all? What gadget, if any, did the shopkeeper use to say that the note is a fake one? Say for example the currency note was fake but then shouldn’t concerned authorities be alarmed to find out as to who is issuing the fake currency notes and since when? What are the other denominations of the fake currency notes or is it limited to only $ 20? How did George get the fake currency note is one of the most burning questions which cannot and should not be ignored come what may? Why police in general, and Derek Chauvin in particular, did not extract maximum information from George when he was arrested by police? Shouldn’t Derek and his rest three police colleagues who came with him to arrest George be charged and punished for failing maximum information from the accused to unearth the gang involved in issuing counterfeit currency bills? 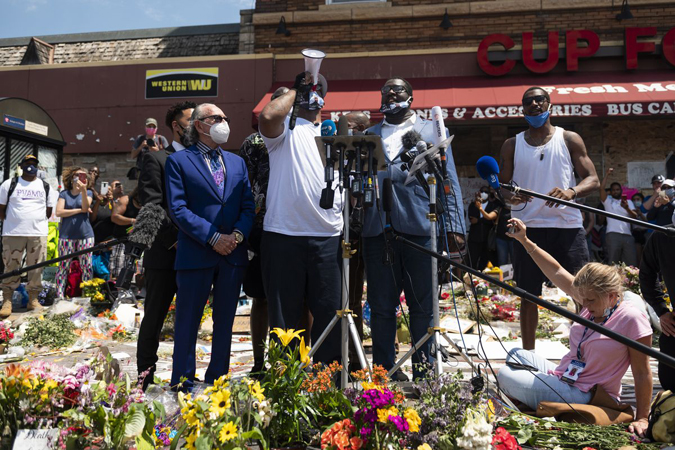 Undoubtedly, all the different gadgets and instruments of mass communication namely television, videos, newspapers, magazines, mobile telephone, face book, twitter, internet etc have eventually become such an internal and integral part of our daily lives irrespective of individual topographical situation to the extent that under no circumstances, howsoever remote may be, we simply cannot keep ourselves aloof from it unless and until live we quite happily at our own sweet will wish to be completely blind, deaf and dumb for that matter without knowing as to what is happening outside our own four walls. No denying the hard fact that had we not all those facilities as enumerated above I say in my honor that even the ugliest instance of George Perry Floyd death had not been known to anyone at all what to talk of what happened afterwards.

Brutal and savage death of George seen by his compatriot Americans, 99.9%, I believe were absolutely alien to him, but ever since they all could very well watch the video and seeing with their naked eyes that George has been handcuffed by police and pinned him down on the ground while wild policeman Derek Chauvin choking him to death in itself was more than enough to ignite the people who then without any invitation from George family or from any other quarter for that matter at their own came out on streets initially in Minneapolis registering their profound anger and thus just a few on the streets eventually turned out as a big crowd where both men and women had joined to protest and agitate against such brutality which is very much insulting for humanity. Many who have never ever came on streets to agitate simply could not help joining the crowd. They carried placards worded ‘Police must be charged’ ‘Blood needs blood’ ‘George is American hero’ ‘Derek be hanged to death’ With each passing minute crowd kept on increasing and shouting at the pitch of their voice condemning George death. Some even could not control themselves any more so they had tears in their eyes. It was truly very pathetic to see thousands of pulled down faces grieving the death of their fellow American.

Having noticed such an unthinkable boorish barbaric and crude method of killing quite naturally thousands of other Americans in many cities and towns, far and near, also came out rushing towards the streets at their own. They were shouting in anger and grief. They had flooded the roads and streets whereby all vehicular traffic came to complete halt and none could pass through rather those who saw the crows turned back to be away from the crowd lest that faced the wrath. Many of the agitators were carrying different sized placards and banners sympathizing with the deceased George and in one voice they were condemning both the police and the government demanding that our lives must be protected and nit endangered instead. Placards and banners read alike ‘discrimination between White American and Black American be stopped’ ‘George Perry Floyd is dead but alive’ ‘Super power don’t kill but saves its people’ ‘Death 2 police’ ‘we demand justice’ ‘we cannot be silent’

Bulk majority of the protesters were very much civilized, decent and law abiding and nicely behaved Americans who had never even in a day dream thought of even damaging property be private or public so the question of looting did not arise at all. From one end to the other end they were very peacefully bursting out and scolding police and their bosses. However, there are always some wicked people as well who as opportunists are always waiting for any mass gathering or eventuality so they join the crowd and mix up with the people as if they are sympathizing like others but in fact they have come with knives, hammers, lock cutters, saws, iron rods and bamboos etc to smash glasses, cut locks, hammer walls to enter whichever showroom, shop, supermarket or pharmacy is in sight to loot them to maximum limit and the crowd when sees such vandalism then some, not all, who have evil germs also join in plundering, therefore, in minutes not hours for that matter nothing is left out except very heavy steel safes which can neither be break opened nor carried off. The theory of mob mentality gets its life in such situations and it was noticed that many who were peacefully agitating have turned out to be looters and plunderers.

Time played a very important role, rather decisive role, which must be admitted though it goes deadly against police and other law enforcing authorities but fact remains fact which be admitted and the bitter quinine pill be swallowed. Had police been extra quick then it had been on the streets and protecting the commercial area in any case and therefore the criminals and the crowd had not dared to break open any shop or markets but ever since police was not in the site so people took the advantage and vandalized whichever place they found at hand without fearing that if police comes they will be arrested. Looters could be seen running away with the loot before they could be arrested.

None in the crowd had thought even for a minute that corona is still not very much present in the US but too active too to the extent that now 10th June at 0250 hours Kuwait time as much as 7,311,526 are victimized globally while 413,011 are the most unluckiest who lost their lives as well and the mightiest country on the face of earth named USA, its citizens numbering 2,045,417 have been found to be positive whereas despite ever best possible treatment facilities which no other country can boast alike but yet 114,151 have eventually died. For many weeks in continuity USA is at the top of the ladder so far as coronavirus cases are concerned in any case and, therefore, under the given situation when thousands have protested hand in hand one can very well imagine as to how many people must have automatically been turned positive. Undoubtedly all those who joined the crowd were not corona carriers and likewise it can very well be said that the whole crowd was free of corona and therefore some percentage from the agitators will prove to be positive if not today then tomorrow or day after. It is next to impossible to identify and locate who participated in the protests to sent to the laboratory to test if he / she has turned positive.

Some who are law abiding and enjoying their lives but unluckily they have been picked up because of participation in the protest are now lounging behind the bars and in due course of time a court of law will announce a verdict against them to pay fine or face jail or both as the case may be. They must be cursing their fate to be locked up alike for the very 1st time in their lives but nevertheless they cannot and should not curse anyone whosoever simply because none on the face of earth advised them to be part of the crowd or for that matter engage in robbing stores and therefore when someone acts purely at his or her own then none but the same individual be himself or herself is to face the legal consequences.

Authorities after noticing such massive outburst of people talking of antagonism, showing fury and registering exasperation must ensure that all souls who have blue passport are to be treated at par and equal to pacify black Americans and inculcate the spirit of equality ensuring that all citizens are equal before the laws of the land so no more murmuring and heart burning instead they all smile.?

The writer can be reached at zaidi.formerdilomat@hotmail.com