In Bolsonaro’s Brazil, everyone else is to blame for virus 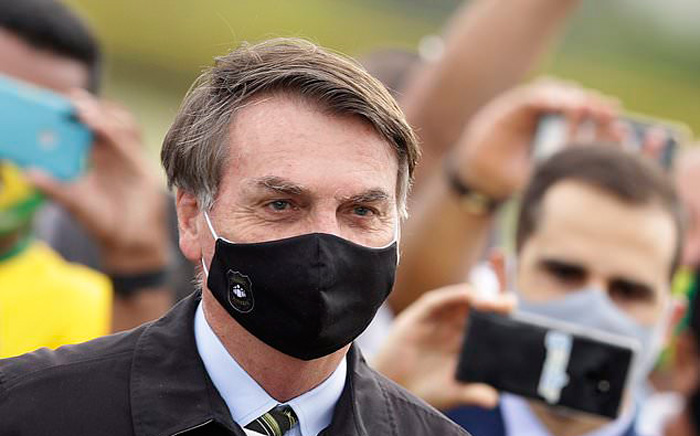 With Brazil emerging as one of the world’s most infected countries, President Jair Bolsonaro is deflecting all responsibility for the coronavirus crisis, casting blame on mayors, governors, an outgoing health minister and the media.

By contrast, he portrays himself as a clear-eyed crusader willing to defend an unpopular idea – that shutting down the economy to control COVID-19 will ultimately cause more suffering than allowing the disease to run its course. The refusal of governors to fall into line with his decree allowing gyms to open, he said, verged on authoritarianism.

Confronted with a travel ban imposed on Brazil by the U.S. because of widespread COVID-19, one of his advisers called it press hysteria.

Since the outbreak started, the Brazilian leader has avoided acknowledging the potential effects of his actions, particularly in undermining local leaders´ stay-at-home recommendations. A rare exception came in mid-April, as Bolsonaro appointed a new health minister tasked with sparing the economy from the coronavirus.

“Reopening commerce is a risk I run because, if it (the virus) gets worse, then it lands in my lap,” he said.

Less than two weeks later, as Brazil´s death toll blew past 5,000, he told reporters, “You´re not going to put on my lap this count that isn´t mine.”

Almost a month on, the death toll in the country of 211 million has more than quadrupled, to 23,473, and continues to accelerate.

The Brazilian Supreme Court determined that states and cities have jurisdiction to impose isolation measures. So Bolsonaro on May 7 walked purposefully across the capital´s Three Powers Plaza to the top court, a tight cluster of ministers and business leaders in tow, and demanded local restrictions be tempered.

“Some states went too far in their restrictive measures, and the consequences are knocking on our door,” he said, adding that tens of millions of Brazilians have lost their income. He has repeatedly singled out some local leaders by name.

When governors defied Bolsonaro’s subsequent decree that gyms, barbershops and beauty salons be allowed to operate as essential services, he accused them of undermining the rule of law and suggested the move would invite “undesirable authoritarianism to emerge in Brazil.”

On Saturday night, Bolsonaro ventured into the capital of Brasilia to lead by example, this time eating a hot dog bought from a street vendor. Video he posted to Facebook showed supporters snapping selfies and calling him by his nickname – “Myth!” – while those in self-quarantine in overlooking apartments banged pots and pans in protest.

A May 17-18 poll by XP/Ipespe found 58% of those surveyed rated Bolsonaro´s pandemic response as bad or terrible, and only 21% as good or excellent. Governors fared more than twice as well in both counts. The poll had a margin of error of 3.2 percentage points.

Latin America´s largest nation has confirmed about 375,000 COVID-19 cases, more than any nation except the U.S., and experts say that figure is a significant undercount due to insufficient testing. The strain on Brazil´s underfunded hospitals has pushed them to the brink of collapse in multiple states and prevents some patients from getting treatment.

Havoc and heartache are unfolding beneath a void of leadership, according to Miguel Lago, executive director of Brazil´s Institute for Health Policy Studies, which advises public health officials. Two health ministers have left office during the pandemic, making Brazil the world´s only nation that can claim such distinction, he said.

Brazil is “completely incapable of dealing with and responding to this crisis as this crisis should be responded to – with complete leadership, clear messages, political stability and unity,” Lago said. “That´s not the case here. Basically, what we´re seeing is a complete lack of seriousness and competence.”

The far-right leader fired his first health minister, Luiz Henrique Mandetta, for supporting governors´ restrictions. In his departing address, Mandetta referred to Bolsonaro in what he later confirmed to magazine Época was an allusion to the Albert Camus book “The Plague.” The novel about a diseased city includes a passage that says those who did not believe in the plague were first to die because they took no precautions.

Bolsonaro´s second minister, Nelson Teich, resigned about a month later after openly disagreeing with Bolsonaro over chloroquine, the predecessor of the anti-malarial often touted by U.S. President Donald Trump as viable treatment. Bolsonaro in his 17-month tenure has often expressed open admiration for Trump and the U.S.

Trump would have to fire his government’s top expert on the virus and the expert’s successor, attend anti-pandemic rallies and expand chloroquine treatment “to approach the level of crisis incompetence” shown by Bolsonaro, Ian Bremmer, the president of political consultancy Eurasia Group, said on Twitter this month.

Weeks after praising chloroquine and directing the Army to ramp up production, Bolsonaro admitted last week that there is no scientific evidence of its effectiveness, but said the nation is “at war,” and it is better to fight and lose than not fight at all. The country still has only an interim health minister: a general with no health experience whatsoever before April.

In the capital on Sunday, pro-Bolsonaro supporters staged a small demonstration in front of the presidential palace, as they have for several weeks. Bolsonaro joined and once again lifted children in his arms.

He shared a video from a helicopter flyover of the demonstration that revealed a sparsely occupied plaza. There were perhaps 1,000 people in attendance, in a city of 3 million. One banner read “Lockdowns kill more than the Chinese virus!!!”

That same day, Trump prohibited entry to the U.S. of foreigners coming from Brazil. Trump had already banned certain travelers from China, Europe, the United Kingdom and Ireland and, to a lesser extent, Iran. He has not moved to ban travel from Russia, which has the world´s third-highest number of infections.

Bolsonaro´s special adviser on international affairs, Filipe Martins, tweeted that the ban was the natural result of Brazil´s large population. “There isn´t anything specifically against Brazil. Ignore the hysteria from the press,” he said. Bolsonaro shared Martins´ comment on social media but has not commented himself.

Upon leaving the presidential residence Monday morning, Bolsonaro declined to answer reporters´ questions. One supporter grabbed his attention, and she begged him to launch a “massive publicity” campaign to improve his negative image abroad.

“The global press is leftist,” Bolsonaro explained coolly, then outstretched his arm fully to point at journalists.