Justice demanded for girls killed in name of ‘honour’ in Waziristan 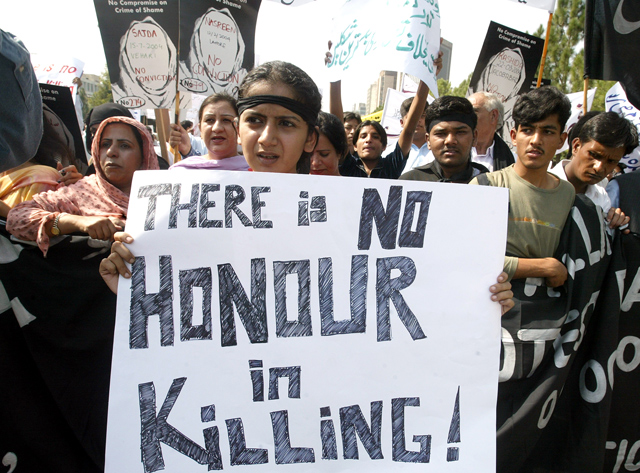 ISLAMABAD: The leaders of Women’s Democratic Front (WDF) strongly condemning the killing of two young women in the name of “honour” in Waziristan have demanded justice for them.

Ismat Shahjahan said, “This incident is the embodiment of patriarchal violence and the overgrown patriarchy which is responsible for taking the lives of many women. Women’s bodies are not repositories of family honour. The state must respond and act in order to bring an end to this on-going patriarchal violence against women.”

A non-consensual and inappropriate video of the young women has been circulating online for a few days, which is believed to have been the reason for their violent murder. Another girl, who was also seen in the video, is currently missing. An FIR has been registered in Shaktoi.

Mumtaz Tajik, leader WDF KP, said that the powerful men in the area who incited violence against the young women also enjoy state patronage. “We demand that the men involved in inciting violence, as well as those who leaked a private video despite knowing the sensitivities should be taken to account. ” she said, adding that “domestic violence still largely remains an acceptable norm in our society, where women’s bodies and lives are considered the property of the men of the family”.

Patriarchal violence against women has been on the rise globally during the COVID-19 pandemic, and Pakistan has seen a surge in these cases. In the first month of the lockdown, 8 women alone were killed in Swat, while trivial issues have led to incidents of patriarchal violence against women in Sheikhupura, Karachi, Hyderabad, Peshawar and other areas.

“The laws in place take a protectionist approach rather than a criminalization approach towards patriarchal violence. Khyber Pakhtunkhwa still does not have a law criminalizing violence within the private sphere. Although legislation alone cannot guarantee an end to patriarchal violence, the absence and opposition of a bill criminalising domestic violence reeks of our anti-women biases,” said KP WDF leader Nargis Khattak.

“State plays a critical role in the construction of a “good woman” and places family as the site of construction and disciplining of “daughters” into willful, subservient and good daughters, this has led to notions about women’s bodies as repositories of community honour.

The slogans raised during women’s marches about their right over their bodies is precisely against this pervasive culture of exercising control over women’s bodies in the name of honour” said WDF Secretary Information Tooba Syed.

The WDF calls upon the progressive youth especially the left and the nationalist political groups to come together to bring an end to the patriarchal norms within the culture as well as the dehumanisation of women through patriarchy. “We believe no political struggle is complete without centring the issue of patriarchal violence in its agenda.”