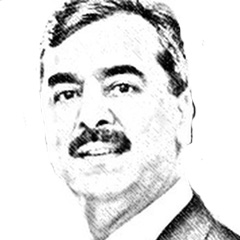 In Memory Of My Father Syed Alamdar Hussain Gillani

My father Syed Alamdar Hussain Gillani was born on December 12, 1919, 8th of Moharram, at his native house Pak Gate, Multan. At birth, he was named Syed Abul Hassan. However, due to the relation to 8th of Moharram, the name was changed to Alamdar Hussain, and this name gained fame and prominence. My father received early education from Muzzafargarh and Multan as my grandfather Makhdoom Ghulam Mustafa Shah Gillani was posted as Sub-Division Magistrate Ali Pur, Muzaffargarh. Nawabzada Nasrullah Khan was a class fellow of my father. In 1941, my father completed his B.A. from Emerson College, Multan. He was the second person of the family to have received a Bachelor’s degree. 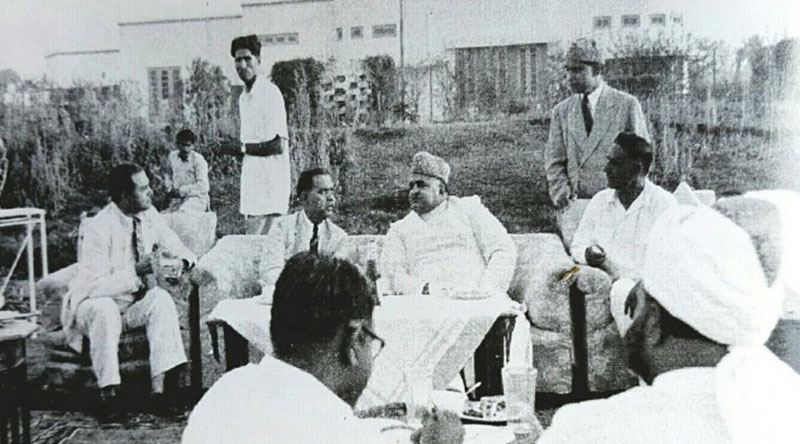 My respected father had started to take part in politics right from his student days and joined All Pakistan Muslim League. When he was a student of F.A., he worked alongside a family elder Syed Zainul Abideen Shah and an uncle Makhdoom Ghulam Nabi ShahGillani, the president of Muslim League District Multan, for the Muslim League.

Father used to think of our house ‘Al Jeelan,’ located on Sooraj Kund Road, as an auspicious place and the epicenter of politics in Multan. Notable personalities like Governor General Ghulam Muhammad, Khawaja Nazimuddin, Prime Ministers Nawabzada Liaquat Ali Khan, Hussain Shaheed Suharwardy, I. I Chundrigarh and Malik Feroz Khan Noon and prominent people like Mohtarma Fatima Jinnah, Sardar Abdur Rab Nishtar and Raja Ghazanfar Ali had graced our house. Moreover, Pir Sahib Ajmir Sharif had also visited this house. In 1951, candidates suggested by my respected father were issued tickets for the Muslim League. During these elections, the convention of Muslim League was held at our house ‘Al Jeelan,’ Multan, presided over by the president Muslim League Nawabzada Liaquat Ali Khan. During the event, the prime minister held the hands of my father and uncles Walayat Hussain and Rehmat Hussain and declared: “They are the backbone of the Muslim League.”

My father believed that a person is unfortunate if he fails to extend his special blessing for the welfare of fellow human beings. He had a remarkable memory. He remembered thousands of names, and whenever people had to be invited to a ceremony, he used to list down the names of people in a very short span of time.

My father believed that a person is unfortunate if he fails to extend his special blessing for the welfare of fellow human beings. He had a remarkable memory. He remembered thousands of names, and whenever people had to be invited to a ceremony, he used to list down the names of people in a very short period

Our father narrated the story of his becoming the provincial minister as follows: “Once I went to meet Chief Minister Punjab Feroz Khan Noon at his residence, and there I met your maternal grandfather Makhdoom-ul-Mulk Syed Ghulam Miran Shah out of coincidence. I inquired about the visit, and he replied that he was there to make Sardar Muhammad Khan Leghari (the father of Farooq Ahmed Khan Leghari) a provincial minister. I felt upset that he should have recommended my name as well. When I met Mr. Noon, he said that you are the chief minister of Punjab and suggest names for the cabinet. I responded that I am not the chief minister and you have the mandate to name the cabinet. However, Mr. Noon remained adamant that I choose the names of the cabinet members. I suggested five names for the cabinet, which included Sardar Muhammad Khan Leghari, Rana Abdul Hameed, Muzaffar Ali Qazalbash, Chaudhry Ali Akbar and Sheikh Masood Sadiq. However, when the cabinet was formally announced, it had one additional name and that was mine.”

In 1953, my father took oath as minister for health and municipality in the cabinet of Feroz Khan Noon. Municipality ministry is essential for contact with the people and local works. As a minister of health, my father rendered remarkable services. He established District Headquarter Hospitals in several districts, amongst which Multan, Mianwali, Muzaffargarh, Dera Ghazi Khan are worthy of a mention. He also played an essential role in the establishment of Nishtar Hospital and Medical College, Multan.

The extension of Mayo Hospital, Lahore and Saamli Sanitorium, Murree, took place during his tenure. There was a dearth of doctors during those times, and rural areas had negligible health services. For an immediate solution to this humanitarian concern, my father laid the foundation of L.S.M.F. Medical School, Victoria Hospital, Bahawalpur. The school offered students a three-year medical course after Matriculation, and upon completion of a two-year service in a rural area, the respective candidate was declared eligible for the M.B.B.S. examination. My maternal uncle Makhdoomzada Syed Hassan Mehmood was the chief minister of the estate of Bahawalpur in those days. He provided the necessary help for this noble cause and thus the revolutionary thinking of a kind heart, not only the needs of health facilities in rural areas were fulfilled but the acute shortage of doctors in the country was also addressed. Hundreds of doctors rose to prominence due to their abilities and services under this policy. My father also strove to provide employment for the masses under his rule. As the minister for health, he enabled children of poor parents to get admissions in medical colleges as the health minister Punjab used to make the nominations during those days.

In 1953, Chaudhry Fazal Elahi, who later became the President of Pakistan, was the parliamentary secretary of my father. Sardar Atta Muhammad Leghari, who later became a lawmaker of the provincial assembly, was the secretary of the department. My father is also remembered for the fact that after becoming the provincial minister for health and local bodies in 1954, he held the first local body elections after the creation of Pakistan. He strove to establish a library in every district to enable people easy access to books. He inaugurated the vast Municipal Library in Qasim Bagh, Multan, which is a great literary treasure for the city. For a brief while, he also held the portfolio of Improvement Trust (current housing ministry). At that time, he took particular interest in the development of Gulberg, Lahore, and Murree due to which countrywide investments were made and within no time, these places turned into busy and happening localities.

My esteemed father also holds the honor of being one of the founders of the 1956 Constitution. He was the federal minister of state for the United Pakistan. Who can better know the sanctity and importance of law than those who sacrificed a lot for the creation of Pakistan? After the promulgation of the Constitution, he, along with all members, paid barefoot respects at the Quaid’s Mausoleum. This gesture was a message that great nations maintain love and respect of their benefactors during their lifetime and afterward. The famous world biography ‘The World’s Who’s Who’ 1954-56 edition included his name.

General Ayub Khan declared the first martial law in 1958 and suspended the 1956 Constitution. Workers of the Pakistan Movement and top politicians were declared ineligible under The Elective Bodies Disqualification Order, or EBDO. The politicians who were ensnared under this notorious black law included Hussain Shaheed Suharwardy, Khawaja Nazimuddin, I.I. Chundrigarh, Feroz Khan Noon, Khan Abdul Qayyum Khan, Muhammad Khan Leghari, Col Abid Hussain (retd), Syed Hassan Mehmood, Ayub Khoro, Pir Ilahi Baksh, G. M Syed, Qazi Ali Akbar, Qazi Issa and several others including my father. With a single stroke of the pen, under EBDO, General Ayub Khan declared all of these politicians ineligible and dishonest without any proof. The vacuum in politics created by pushing away the first-row politicians shook the foundations of the country. This law remained in force for seven years.

I always witnessed my father, accompanied by his brothers, pay respects at the shrine of Hazrat Pir Peeran Musa Pak Shaheed on the main procession of Eid Milad-un-Nabi, 10th of Moharram. He visited his elder sister on every Thursday and used to have dinner with the rest of the family. During the meal, discussions regarding family and other matters took place. This practice was vital to keep intact the family unity.

My esteemed father also holds the honor of being one of the founders of the 1956 Constitution. He was the federal minister of state for the United Pakistan. Who else could have known the importance and sanctity of the Constitution as he gave countless sacrifices for the creation of Pakistan

My respected father was very fond of Lahore. He always visited Data Darbar whenever he came to Lahore. Sometimes, he also visited Mian Mir Shrine. On several occasions I accompanied him. 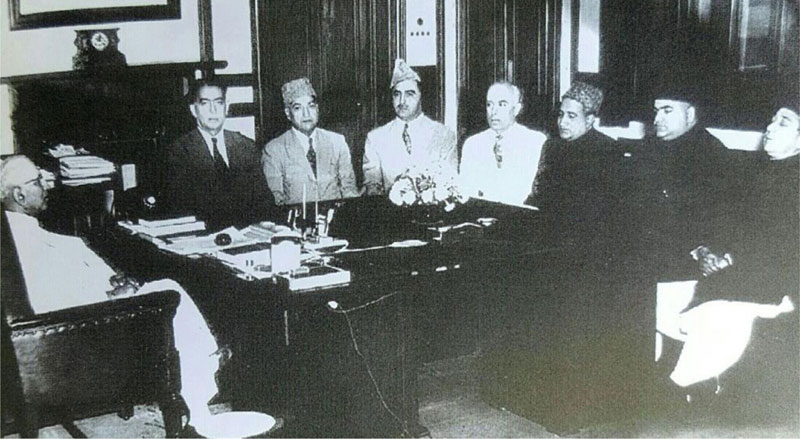 My father always prepared food with his own hands on the 3rd of Ramadan and used to say that this the day of the demise of Bibi Fatima (R.T.A.). He used to invite his friends and hosted them graciously. All his life, he maintained this tradition with immense love and fondness. Incidentally, he passed away on the same date that is the 3rd of Ramadan, August 9, 1978, at Nishtar Hospital, Multan. May his soul est in peace!

He maintained a regular journal. Few days before his demise, he jotted down this verse of Ahmad Nadeem Qasmi:

It is a different matter they will bury with honors)

Today, it has been 42 years since dear father left us. Following up on his tradition, on every 3rd of Ramadan, I used to invite my friends and thousands of well-wishers at Iftaar, and we pray for the departed soul and elevation of his spiritual ranks. This date has become an important date in Multan’s political calendar. But this year, due to the Coronavirus pandemic, I will not be holding the Iftaar. We will, nonetheless, pray for the soul of my father and pray to Allah Almighty to relieve us from Coronavirus.