* From 1970s onwards, all the enthusiasts were keen to attend Najam Sahib’s ‘Sangat,’ his weekly gatherings 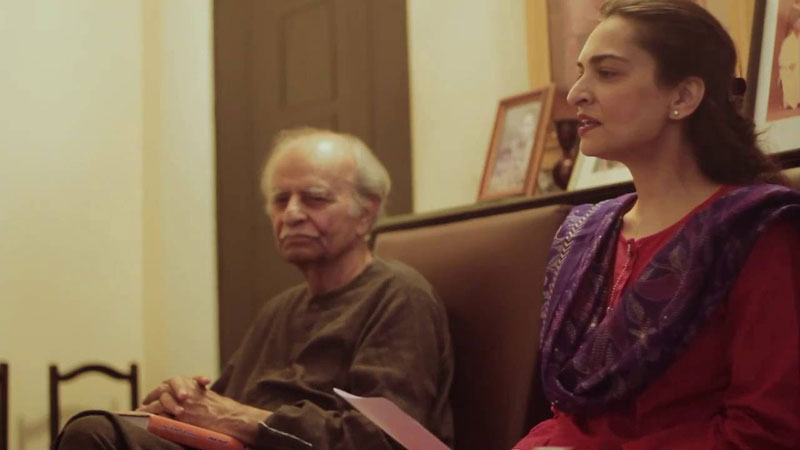 Najam Hussain Syed is a renowned Punjabi writer, poet and critic. I came to know about him when Izzat Majeed, another Punjabi poet used to hum Shah Hussain’s Kafis in different tunes to what I had learnt at my PTV and Radio recordings composed by various music composers of that time. Izzat confided that these tunes were composed by Najam Hussain Syed who was known more for his multi-faceted contributions to Punjabi literature. His weekly get-togethers at his house were and still are famous for students of Punjabi literature to gain wisdom from.

From 1970s onwards, all the enthusiasts were keen to attend Najam Sahib’s ‘Sangat,’ his weekly gatherings. One, namely Fayyaz Baqir shared his dilemma on ‘Sanagat’ on February 17, 2017 in his post on internet as “Najam Saheb unlike other revolutionaries never ever gave a ‘Party Line’. He used to keep sitting in the corner without uttering a word. He also shunned publicity and public appearance. For revolutionaries raised in a consumerist society any object without a label is a suspect object. This made Najam Hussain Syed also a suspect person. The news of this gathering raised alarm bells in the ‘revolutionary circles’. So first and most important task was to create a label for this group; so that it could be properly catalogued in memory; and judged and dealt with accordingly in the course of ‘political action’. Although Najam Saheb was complete opposite of a ‘revolutionary cult’, he was seen as a cult and his work was seen as de- politicization of revolutionary cadre. In the stigmatization, Sangat was named “the Hoo Group” on the assumption that group used to chant Allah Hoo or other Sufi mantras”.

On his above comments, Manzur added on February 17, “Sangat was started at the Punjab University New Campus. I had invited Najm Hossain Syed to initiate a group which would study history and culture of the Punjab. After a few meetings we could not find accommodation at the university and we requested Najam Saheb to shift it to his home. He agreed and the format of reading of Shah Hussain was developed then. Najam Saheb composed the Kafis in different Raags not necessarily in Raags which used to be mentioned in the heading of every Kafi. Tahir Yasoob led the singing at the initial stage but when he got settled in Bahawalnagar, Shuja ul Haq and I had to fill in. A bit later, Samina Hasan Syed used to chip in at times”.

SAMINA SYED — since Samina Syed’s name has been mentioned, some information on her needs to be shared. She was Najam Hussain Syed’s wife. She was a singer and a teacher. We have mentioned Najam Saheb’s weekly meetings namely Sangat above. They usually started with recitation of Punjabi poems explained by Najam Saheb then rendered by Samina Syed. The aim was to provide an upbringing ground for intellectuals associated with Punjabi Movement. Samina Syed was Ustad Chotay Ghulam Ali’s disciple. When she was music teacher she had played a constructive role in the establishment of the Musicology Department at College of Home Economics, Gulberg, Lahore. She died in 2016 after serving the weekly ‘Sangat’ sessions at her home on Jail Road, as organizer and singer for almost four decades. Since Samina’s demise, her daughter Risham Syed, brought her father to stay with her in her Model Town residence in Lahore as he was alone at his Jail Road residence and was advancing in age. 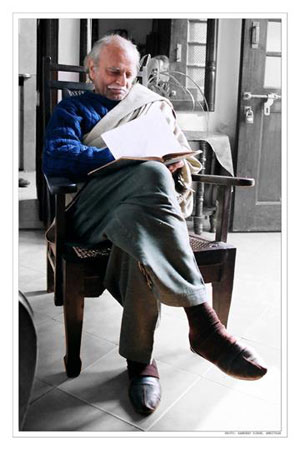 Najam Hussain Syed is believed to be a shy person and does not appear in public much. He avoids talking on the microphone or appears for TV interviews and quietly works in his domain of work, especially in the domain of literary criticism. With this approach he has produced many books in Punjabi language and is rated at the top in modern Punjabi literature despite their difficult diction. He inherits his creativity from the culture of which he believes the roots are imbedded in folk and Sufi traditions. He was born in Batala, East Punjab in 1936 in a Qadri family. His family moved to Pakistan at the time of its creation. He did Masters from Forman Christian College in 1958 and joined government job till he retired in 1995 as Accountant General of Punjab. During the time he also headed the Punjabi Department in Oriental College in Punjab University.

LITERARY WORKS & RELATED PHILOSOPHIES — not very many notable events took place in Punjabi literature except Ahmad Rahi’s Trinjan, and Faqir Muhammad Fariq and Muhammad Baqir’s Punjabi Academy that published Punjabi Classics after Pakistan came into being. In this backdrop Najam emerged with his first poetry book titled ‘Kafian’ in May 1965. He founded Majlis Shah Hussain and Punjabi Adabi Sangat simultaneously. For the latter Muhammad Asif Khan and Shafqat Tanvir Mirza were his supporters. He has authored more than 40 books of poetry, plays and creative non-fiction. Most of his books have been published by Suchet Kitab Ghar. These books are very cheap to buy for its rich contents.

It is not possible to talk about all of Najam Saheb’s books. We shall therefore discuss a selected few. Prior to doing that I must mention a comment of Mushtaq Soofi, another learned name in Punjabi literature who says in his column Punjab Note in a local English daily dated March 02, 2018 “His (Najam’s) oeuvre is huge that needs to be critically appraised. But in a society where poetry whether inspired by intuition or driven by tradition is held to be an epitome of creativity, cerebral activity such as criticism is thought to be merely a part of marginalia. So no systematic effort has been afoot to critique his work”. Having said that, many students of Punjabi Literature such as Fayyaz baqir above could decipher answers to their basic queries such as ‘Are we free individuals? Can we join the struggle for liberation of working classes without liberating ourselves? What is liberation in the first place? Do culture, language and heritage have any connection with revolutionary ideology and revolutionary politics?’

KAFIAN — majority of the poems in his first book ‘Kafian’ use night as metaphor. The representative poem is ‘Night is a burning oven’. About the contents of this book Punjabi intellectual Zubair Ahmad in his article on Syed states ‘Structurally the reader expects to enter in the world of ghazals, loris and kafis, but instead ends up addressing modern issues such as that of identity of the world around him’.

CHANDAN RUKH TEI VEHRA — najam’s second book ‘Chandan Rukh Tei Vehra’ was published in 1969. It talks about rapid pace of urbanization. The metaphor of a snake charmer is used in the poems who is forced to leave this profession as very few were interested in his trait of business. The forty two poems evoke Shah Hussain’s verses. Zubair Ahmad and Fauzia Rafiq have translated his poem ‘Going around’ as:

Why are you breaking your leg, brother?

Why don’t you move it away?

It is not a dog but my own child

Says, take me along to Bazaar

‘Bravo, take him along, it’s alright’

The Bazaar he wanted to go to is not there

Today after thirty years I have come to this city

Yes, I am native of this city

You don’t know me

He used to stand up to me every day

And I used to lock him inside

Then I too was a child

Just consider me of his age

One day I forgot him inside

I didn’t return in the evening

Trading from country to country

I was just passing by

He surrounded me as I opened the door

He is still as restless as when I left

Only nails and hair have grown

The bazaar he wanted to go to

It has been closed down since long

After selling and earning shopkeepers have gone to take rest

Now where shall I take him, if not there then where?

‘What a strange story you have told O! Stranger’

You call it a story!’

BAR DI VAR — this book pertains to the heroic deeds of the dwellers of the areas close to the canals. Narrator’s interview with Lakhi, a local wordsmith exposes the rebellion of the Punjabis against the British who deprived them of their rights. The book contains thirteen other poems on the same issue. Shah Shamas struggle is given in the poem Ballad of Multan City.

KHEYAL DUKKAR — Najam’s book ‘Kheyal Dukkar’ (May 2011) comprise translations of Bengali writer Utpal Dutt’s (1929-1993) dramas, the first ‘Vadh Vehr’ 1857 pertains to the fall of the last Mughal King Bahadur and the second one ‘Hathan Di Sha’ari The Sha’ari Dei Hath – 1918’’s Lahore. Utpal Dutt balanced successful parallel careers as an extremely serious theatre playwright and director in Bengal alongside doing hilariously comic roles in Hindi cinema. He is considered as a great dramatist in progressive Bengali theatre of the 20th century. Najam’s translations of his plays deserved commendation due to its easy flow of reading in Punjabi especially when he has picked up the English translations for his Punjabi versions.

KHAPPE — the book ‘Khappe’ (the gaps) was written when Zia ul Haq’s suppression period started. Najam, dealt this period on the suppressed condition of the poets and writers. Apart from the famous opening poem on Noori Keemokay who wrote Dholas on Nazam Lohar, a rebellious figure under the British Rule, a poem tilted Rang (colours) stood out. Its English translation is as hereunder:

A message of warmth

Place the warmth in your heart

The gleam in your eye

If winter’s arrived, spring shall too

If smoke smoulders, the fire too shall blaze …

Those who every day decay

Live a life of death

Reds and greens come out

When they cast off old skins

IK WAST AGOCHAR JOHNI — osne of Najam’s books is titled ‘Ik Wast Agochar Johni’ (a thing, hidden birth) (2017) comprising 60 poems and a Play titled ‘Ausar’. He usually makes a combination of his poems and Plays in one book. The volume is generally not large. Dr. Wazir Agha used to have the same approach.

The Play Ousir is in the backdrop of mid-1950s where three ambitious students from poor families come to Lahore and have desire to study hard and become high officers, They make use of libraries and study all notable names of English and Urdu literature till they come across a French teacher Dr. Rehmat Ali. He gradually opens up and makes them sit close to each other, both genders. A colleague Dr. Akhtar who was English teacher opens up with the boys and tells them that their French teacher was from Gujranwala’s Kashmiri origin. He had joined a group in Kabul where an interim Indian government had been launched against the British. Afghanis jailed him and he was hired to tutor English language to kids. If they had a deal with the British, he would be repatriated or sent to Russia. Rehmat went to Russia, escaped to France, taught his language and returned to Lahore. This background was enough for the three students to step back from the influence of their French teacher.

From the above submission prepared from the available information and my own analysis, it can be said that writing for over five decades now, Najam Hussain Syed’s dream is that Punjabi language is revived to give respect to Punjabi people.