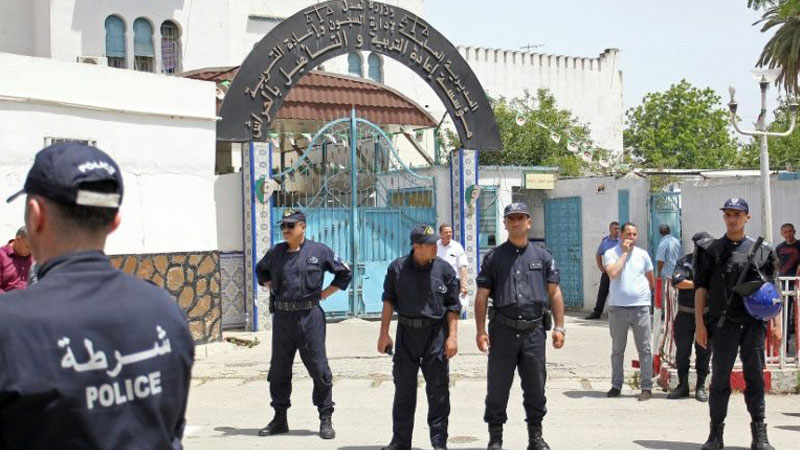 As governments in the Middle East isolate their populations to prevent the spread of coronavirus, attention is turning to the region’s jails, where detainees face a more punishing form of lockdown.

“Because of the pandemic, confinement is an additional punishment for the prisoners,” said Kaddour Chouicha, 63, an engineering professor at Algeria’s University of Oran and a human rights activist.

Chouicha was detained in December. He is part of an anti-regime protest movement that toppled longtime autocrat Abdelaziz Bouteflika more than a year ago.

Some Middle Eastern governments have released prisoners as part of their response to the novel coronavirus pandemic, while others have ignored pressure to do so.

Iran has temporarily released 100,000 detainees, while Bahrain freed hundreds last month and Morocco and Tunisia have announced pardons that affect thousands of prisoners.

Algeria too has pardoned some 5,000 inmates.

But for those still languishing in jails, incarceration is a brutal experience.

“You have to plan for the future,” Chouicha said of surviving the prison time. “It’s the only way.”

Egyptian authorities have rejected pleas to free up overcrowded jails, continuing to imprison dissidents even as COVID-19 infections in the country rise.

One former detainee, who preferred not to be identified out of fear of repercussions, said there was a “catastrophe brewing in prisons” in the country because of unsanitary conditions and overcrowding.

“We used to dream of having the metal door to the cell opened even though it led to a hallway with a prison guard. Psychologically, that meant a lot to us,” the ex-detainee and writer told AFP.

He spent around two years in a cramped cell with some 25 other men in the Borg al-Arab prison, near the northern city of Alexandria, and recounted how a hole in the ground functioned as a rudimentary bathroom for showering and as a latrine.

“We had a tattered blanket that we used as a door for privacy, and the little running water we had… would wash away all the filth on an already dirty cement floor,” said the former inmate, who was released in late 2015.

“We slept on our ‘swords’, meaning we lay on the floor next to each other on our sides. You couldn’t sleep on your back, that was out of the question because of the lack of space,” he added.

He expressed fear that the fragile health of some prisoners would have been further strained by the authorities’ decision to suspend family visits from last month, as many depend on such visits for medication supplies.

The move would be taking a psychological toll too, he added.

“Imagine you’re in a room all by yourself with no access to the outside world,” he said.

“That’s the feeling of a detainee… and it destroys you psychologically.”

In war-torn Syria, the pandemic has put a spotlight back on the plight of political prisoners and long-term detainees.

Syrian activist Wafa Mustafa is part of a group that wants the United Nations to pressure Syrian President Bashar al-Assad to free detainees.

Last month, on Twitter she said it had been “2,464 days for my dad in #Assad prisons. Almost 7 years in fear, sadness, anger, and hope. I’ve always tried to avoid thinking: is he alive? Is he fine? Is he hungry? Will I ever see him again?

“With the #Covid_19 disaster now, it’s more difficult than ever to resist the pain,” she wrote in English, posting an old photo of herself with her father.

“The crowded meeting room is an ideal place for the virus to spread,” he wrote, since many families have been forced to visit in person.

Khandan said that according to his wife, there was an acute shortage of face masks and gloves to prevent the spread of the virus in the facility.

Laleh Khalili, a political science professor at Queen Mary University of London who has written about jails in the region, was pessimistic about authoritarian regimes safeguarding the health of their populations, let alone detainees. In her view, some governments have been able to exploit the pandemic to exert further social control because their concerns about security “are far more important than… the public health of citizens”.

“The very threat of the illness can serve as a means of terrorising prisoners,” she said. “Unfortunately the plight of prisoners will not be prioritised.”