Sardar Kalyan Singh Kalyan is the first professor belonging to Sikh religion in Pakistan. He is Assistant Professor in Punjabi Department at Government College University, Lahore. His research on Punjabi script is a part of Syllabus. He produced a booklet in which he made Punjabi Gurmukhi script easier for students to study and learn from. This booklet is used in all the teaching institutions where Punjabi is taught. His colleagues have a great regard for him. Prof. Dr. Hassan Ameer, former Vice Chancellor is on record to say that since Kalyan was born in Nankana Saheb, he is a very apt representative of his University with his community and with the people in Nankana Saheb. 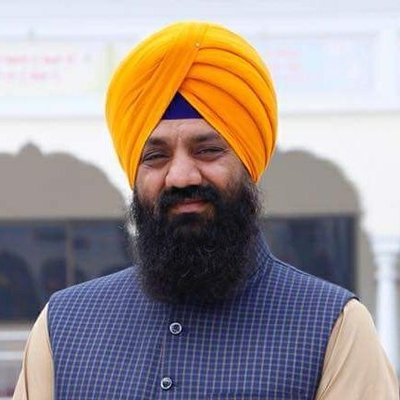 Sardar Kalyan Singh Kalyan was born on December 12, 1979 in Nankana Saheb and obtained his early education in Government Gurunanak High School where students of all religions, studied. Hostel facilities were provided in the Gurduwara. He joined college in Nankana Saheb thereafter. His forefathers are servants (sevaks) at the Gurduwara. His mother Taran Kaur cooks ‘Parshad’ in the mornings and in the evenings. She is there since forty seven years. His father Sardar Isher Singh is Head Sevadaar there since ages. The way the four entrances to the Gurduwara represent the unity of four religions, the same way Kalyan’s personality offers love, peace and unity; a symbol of inter-faith harmony.

Sardar Kalyan Singh Kalyan continued his higher studies and obtained Doctorate and Masters from the University of the Punjab in 2017 and 2007 respectively. He also got M Phil in Punjabi in 2016. His graduation was from Government Nankana Saheb College affiliated with Punjab University in 2005. He served in Gujranwala and Gulberg Colleges after getting selected through Public Service Commission. He learnt computer technology with certificate in Flash & Internet Tools from Quaid-e-Azam Institute of Computer Sciences in June 2003, followed by DCA and WPD from the same institute. This additional trait helped him in his research work on Punjabi script. His proficiency in Punjabi (Gurmukhi and Shahmukhi), Urdu and Puchto and Hindi languages is excellent. His published materials include ‘Gurmukhi Ustad’ in Shahmukhi, Gurmukhi and Sindhi languages – 2015 and ‘Life of Sri Guru Nanak Sahib Ji – 2016. This material was well received.

Sardar Kalyan is an activist and has played a very positive role in getting family laws bill passed from the provincial assembly. Kalyan explained in one of his interviews with Urdu Point that in Pakistan no marriage certificates were being issued to the minorities. Lack of it created problems for identifying the legal descendants. His efforts that were initiated in 2007 have borne fruit now. Pakistan stands in the forefront to pass Sikh Marriage Act now. In India there are family laws separately for Hindus and Muslims but Sikhs which are around two crores in number have been treated under Hindu laws, which is unfair. Abroad everybody is treated under the same family laws. Sardar Kalyan Singh Kalyan graciously invites all the Sikhs living abroad and desirous of getting married to come to Pakistan for their marriages such that their registration is done. Kalyan, being bread and born in Nankana Saheb has his brothers, nephews and cousins all working for Army, Rangers, Health, Police and for other sectors. He stated that Sikhs are well merged in the Muslim culture. There were initial problems due to riots during the partition (and rightly so) he added but now situation has improved. (At the time of writing this piece, opening of Kartarpur Corridor and imposition of Hinduvta Doctrine in India by BJP Government has tilted Sikh’s sympathy towards Pakistan).

Why Sardar Kalyan selected Education as his career?

Initially inclined towards doing Law, Kalyan’s interest turned towards Punjabi language as all his friends and acquaintances expected from him that being Sikh, his command on Punjabi language would be excellent. So he turned all his energies towards this field and he thought that education was the best field to serve his mother tongue and that he knew the Gurmukhi script well as not many were akin to it in Pakistan. He named Syed Sibtul Hassan Zaigham who encouraged him to adopt this field. On his advice he became sub-editor for Dr. Akhtar Hussain Akhtar’s Punjabi magazine ‘Lehran’. Subsequently he also became editor of this magazine. Kalyan believes that a child’s brain is developed as per the mother tongue that is spoken at his house in inception days. If any other language is thrust on him/her, it can create mental diseases that are difficult to be cured later on.

Kalyan Sigh Kalyan stated that when Punjab was united before partition, Maharaja Ranjit Singh had made Punjabi as compulsory language which was not followed subsequently during and after British Raj. We have confused our children by imposing Urdu and English in our homes and educational institutions. We have taken them away from their mother tongue, hence from their roots. Kalyan gave examples of Japan, China and Iran. Their whole structure is based on their native language; the former two have ruled the technological development in the past and continue to do so and their education is in their native language. Kalyan quoted the example of Grammar School, Lahore where children were asked about their mother tongue. Some responded that it was language of beggars and servants. Some stated that it was language of their grandparents. This state of affairs is unacceptable and we are producing a generation alien to our culture and traditions.

Kalyan stated that on February 02, 1833 when the British were about to establish its rule in Punjab, they decided that in order to weaken the Punjabis and their pride, their language and culture must be destroyed to divide its society. They planned to divide the society on the basis of religion. That is what happened. “Our society is hollow from within now. The only way to survive with dignity is to revert to our language and culture”, Kalyan concluded.

In order thus to introduce literature in Gurmukhi, Kalyan carried out translations as follows:

His unpublished books are:

Interest in other languages:

In Nankana Saheb, Kalyan got exposure to the other dwellers who spoke Puchto. He and his sister got married in such families. So he learnt this language gradually due to this relation.