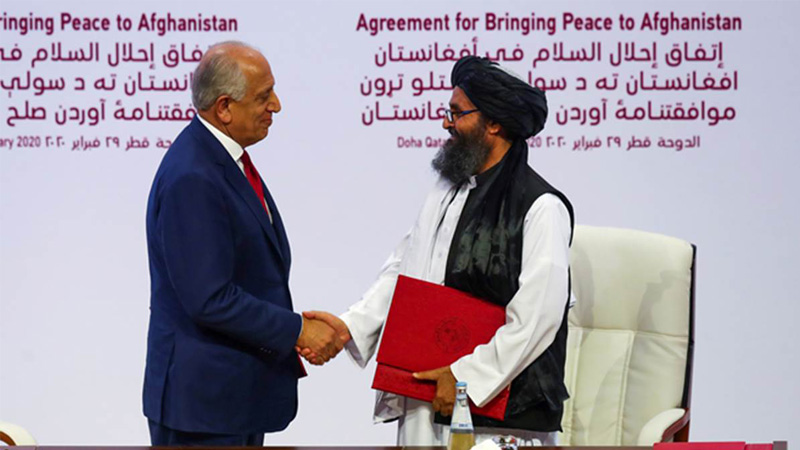 As predicted earlier, intra-Afghan dialogue is unfolding as the most complicated phase of peace process. Pre-condition of prisoners’ swap, due on March 10, is still unfulfilled. After a belated announcement of presidential election’s result, runner-up Abdullah Abdullah challenged the victory of Ashraf Ghani by conducting a parallel oath ceremony. Obviously, this deadlock has further discredited the Kabul government prior to formal beginning of the complicated phase of intra-Afghan dialogue. American seriousness can be gauged from this fact that Secretary of State Mike Pompeo had to visit Kabul by discarding all pandemic related cautions to convince both the claimants of Afghan presidency for a past like power sharing formula. Unlike past, this time the US mediation could not resolve the presidency dispute between Ashraf Ghani and Abdullah Abdullah. Bitter end of Mike Pompeo’s Kabul tour is not a good omen! Pompeo’s outburst on Ashraf Ghani and Abdullah Abdullah came along with a $1billion cut in US aid for Afghanistan. On the other side, Pompeo’s meeting with Taliban at Doha ended at comparatively much positive note about peace deal and ongoing troops’ withdrawal. Acceleration on prisoners’ swap is much slower than the expectations. Afghan forces are being attacked by Taliban at various locations. Chaos looming over Afghanistan is beneficial for peace spoilers. A weak and ineffective ruling regime in Kabul has provided enough maneuvering space to undesired elements. Two major terrorist attacks in Kabul, with in span of one month claimed by the ‘IS’, are precisely aimed at disrupting the peace process. Delay in restoration of peace has many consequences for the region. Undoubtedly, top sufferers of this prolonged crisis are Afghanistan and Pakistan. Under existing scenario, proxy infected western neighbor like Afghanistan poses multiple threats to Pakistan security. Battling at economic front for a much needed recovery, Pakistan desperately looks forward for expeditious but respectable return of more than 3 million Afghan refugees to their homeland. Terrorist infiltration through western border is not easy to ignore, especially once they freely operate at Afghan soil under foreign patronage. Unresolved deadlock between Abdullah Abdullah and Ashraf Ghani, against the wishes of US, portrays a very intriguing side of the game being played at regional chessboard. Apparently, both rivals lack requisite spine to differ from US’ advice. Growing weakness in non-Taliban stakeholders is outcome of their traditional inability to agree on wider national interests. In order to grab more than their due share from pie, smaller spoilers can create bigger damages to ongoing peace efforts. Afghan Taliban are all set to fully utilize this divide to their benefit. Team nominated by Kabul for intra-Afghan dialogue has been promptly rejected by the Taliban. Plea of Taliban seems justified as the team nominated by Kabul lacked representation of major stake holders. Despite being a victor of presidential election, Ashraf Ghani cannot claim to be a sole representative of Afghanistan. Persistent challenge to Ghani’s presidency from none other than his former chief executive has further strengthened the stance of Taliban. Intra-Afghan dialogue cannot be held without finalizing the representation of non-Taliban elements. The US should not repeat the past folly of leaving the war ridden country unsupervised at the mercy of non-flexible power grabbers. Active emergence of the ‘IS’ in main heartland Kabul with ferocious terrorist attacks deserves due attention. News items appearing in media regarding involvement of an Indian national in recent attack at Sikh temple is another addition to multiple chaotic probabilities. Ashraf Ghani, being the president, should adopt a flexible approach. A broad-based team representing all quarters of Afghan society in Intra-Afghan dialogue will subsequently help a lot in governing the country as per agreed upon mechanism. Washington should play its positive role in convincing the Kabul regime and rest of the non-Taliban players to finish meaningless disunity without wasting further time. Inability of Afghan forces to deal with hardcore organization like ‘IS’ needs no further elaboration. Few weeks back, US General Frank Mackenzie informed Congress Committee that Taliban had played a decisive role in eliminating the ‘IS’ factor from many parts of the Afghanistan. This admission further endorses the firm hold of Taliban on major parts of Afghanistan. As the withdrawal of US troops has already started, unfolding of peace process needs to be assessed in Islamabad by keeping all the probable consequences in focus. How long and firmly can the ‘IS’ stand in front of Taliban? Who is at the back of the ‘IS’? Will Taliban agree to share the power with weaker and divided opponent stakeholders, if at all Intra-Afghan dialogues take place in the days to come? The hardest part of the Afghan peace process has begun! The US should play its due role in negotiating the tough hurdles hindering the complicated peace process.

Writer is a freelance and can be reached at sikandarnoorani@yahoo.com)