The number of confirmed cases of coronavirus has jumped from 53 to 800 in Pakistan within less than two weeks. It is an educated guess that the numbers will multiply. The pattern of increase of coronavirus cases resembles that of Italy, which is quite alarming. The government is undecided oneither to lockdown or not to lockdown. In fact, a partial lockdown has been done. Offices, malls, clubs and airports have closed. 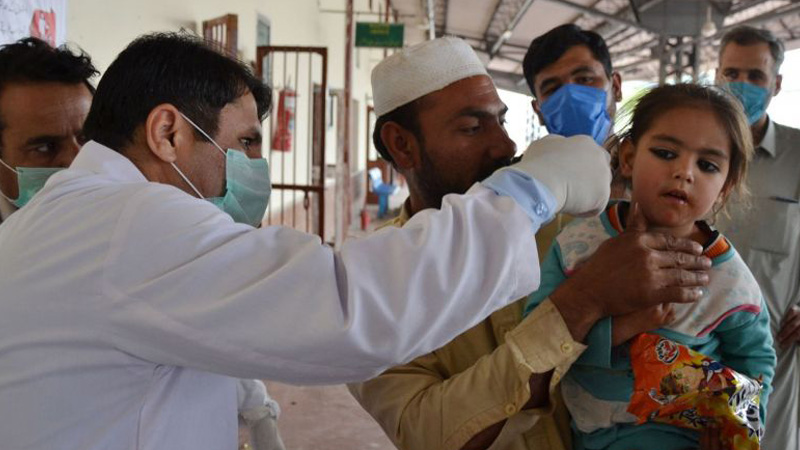 But much more ought to be done at a greater pace. A five-pronged national action plan involving medical, economic, social, political and administrative aspects may be formulated. It should have four pillars – forced social distancing, complete lockdown, raising awareness about the treat and encouraging volunteerism among the public. India has much lower number of confirmed coronavirus cases but complete lockdown has been declared till March end in New Delhi. There will be a curfew from dawn to late night.

Pakistan has been hit badly by the coronavirus mainly because of the pilgrims returning from Iran. The proper isolation of suspected or infected cases could not be done at the border. Ironically, many of them fled the quarantine who had to be tracked down and apprehended. The government started taking action step by step but has resisted full lockdown apparently because of daily wagers and poor people who may face acute hardships during three weeks’ lock-down. Slow and reluctant decision makers are giving coronavirus a free hand to spread. Only on Sunday, Prime Minister Imran Khan advised the public to resort to prevention by social distancing and self-quarantine.

The need is to adopt aggressive and concerted measures on the pattern of anti-dengue campaign conducted successfully in Punjab in 2012-13, which yielded amazing results. Sri Lankan doctors, who flew to Pakistan to advise the government on dengue control, had predicted that more than 25000 people could die in Punjab alone within a few months. Then chief minister Shahbaz Sharif mobilized all capabilities available and managed to bridle the menace. His strategy included awareness programs, disinfecting streets and roads, ensuring proper health facilities, and to top all leading from the front so that all government departments and public quarters were kept on toes to win the war.

Similarly, to fight against COVID-19, it is imperative to muster all capabilities and launch them with full might and vigour but in a judicious and calculated manner. Emphasis should be on awareness campaigns and establishing quarantine facilities. Restrictions have been imposed on social gatherings. There is a need to implement the directions by force as many people are arranging parties and wedding ceremonies at homes. The private sector ought to be taken on board to fill the gaps left open due to government’s inadequate capacities and meager funds. Combined efforts are required to avert the crisis.

Clerics are thriving on the crisis and making tall, but obviously false, claims that coronavirus wouldn’t harm those who will come to mosques

The non-seriousness of the government, public and clergy was amply demonstrated on Friday when people thronged mosques and offered Friday prayers in Lahore and many other places across Pakistan. At least two confirmed patients vanished from the hospital and returned after an hour or so. They told that they had gone to offer Friday prayer in a nearby mosque. No lesson has been learnt from the Muslim countries like Saudi Arabia, Turkey and Iran that have banned group prayers in mosques. Conversely in Pakistan clerics of all sects are thriving on the crisis and making tall, but obviously false, claims that coronavirus wouldn’t harm those who will come to mosques. There are some extra-brash mullahs who challenged to hang them in the middle of the road if corona virus affected those who offered prayers in the mosque. They must be reined in instead of being encouraged.

Lockdown and social distancing will not only make living expensive for people, but will hit the economy which is already in dire straits. But this bitter pill has to be taken to avoid gigantic catastrophe. Plans should be in place to look after daily wagers and low income citizens during this period. Arrangements should be made to ensure availability of adequate food and medicines and to make work from home as productive as possible. Society should also think about giving relief to people in form of lower prices of petrol, less rates of utility bills etc.

I just heard announcement from the nearby mosque asking the people of the area to avoid coming out of homes after Asr prayers. This opinion leader-driven approach seems quite effective for a large chunk of population. But there are many thick-skinned violators for whom nothing less than enforced social distancing would work. Community can be encouraged to inform the government through helplines about the violators.

Being a democracy, the government should ensure that harsh decisions are done in consultation with people and they are not kept in dark. All are facing a similar threat with a similar intensity therefore combined response is needed. It is only possible when people are kept informed. It will definitely give birth to a shared culture of empathy and preparedness in times of acute crisis. To overcome the handicap of limited resources and manpower at the disposal of the government, volunteerism should be encouraged and quickly brought into action. The most effective set-up for this purpose can be Pakistan Red Crescent. During the last five years there has been phenomenal increase in the volunteers of Pakistan Red Crescent. They are somehow better trained than general citizens and are more willing to work in times of disaster and calamities. Similarly other NGOs, community groups and even madrassahs can be mobilized.

The coordination between the federal government and the provincial governments has yet to be seen. The Sindh government seems to be quite proactive, mainly because most numbers of confirmed cases are from Sindh. Punjab government is still taking off. The federal wants the provinces to take the blame of lockdown. Why can’t they make a joint decision and take responsibility? There is no time for petty political point scoring and misplaced placidness.