US snubs India: the Balochistan issue

Not only the US cleared a misperception regarding its support to India on the Balochistan issue, but it also proved its neutrality over internal affairs of Pakistan and India. The Baloch issue came up at the State Department’s regular news briefing during the Eid holidays when an Indian journalist raised a question about the official US policy on “human rights violations and the fight for freedom” in Balochistan. In his response, US State Department Spokesman John Kirby said, “The US government respects the unity and territorial integrity of Pakistan and we do not support independence for Balochistan.” The same words were repeated again by the US official when the journalist put another question seeking information on US policy regarding certain persons and groups in the US who were working for freedom for Balochistan.

It is a setback for India and its foreign policy wizards who are busy raising the issue of the Balochistan insurgency to counter news about unrest in the Indian- occupied Kashmir that is being highlighted by Pakistan at various international forums. Prime Minister Nawaz Sharif is expected to arrive in New York on September 18 to attend the UN session, and so far Kashmir is high on the list of issues he is likely to raise in his address to the General Assembly on September 20. In order to counter this ‘onslaught’, New Delhi has threatened Islamabad of pointing out alleged human rights violations in Balochistan at the same platform. In fact, India has launched a campaign to internationalise the Balochistan issue since Prime Minister Narendra Modi made a controversial point in his speech on August 15 wherein he said that the people of Balochistan and Gilgit-Baltistan as well as Azad Kashmir were thanking him for his support to their struggle. Pakistan’s reaction, predictably, was angry, calling it a breach of international norms and intrusion in a country’s sovereignty. Undoubtedly, those words were out of place and the move was nothing short of churlish tit-for tat, a ‘policy’ highly favoured by respective Indian governments vis-à-vis their ‘official Pakistan stance’. India is doing its best to try to divert the attention of the world from the Kashmir issue by banking on a false propaganda campaign. Kashmir and Balochistan are two different issues and cannot be equated just for the sake of undermining the rival. Kashmir is a disputed territory, while Balochistan is a part of Pakistan, an internationally recognised fact.

The US spokesperson’s statement can be termed as a big blow to the Indian government’s hegemonic designs in the region. It is a lesson for the Indian government that it cannot impose its agenda on other sovereign states in the region. In reality, the US has adopted a bold stance and clarified to India that it does not support unrest or militancy in any part of the world. History shows that the role of the US has always been neutral on issues like Kashmir. The US has always urged Pakistan and India to resolve the Kashmir conflict bilaterally, and work on improving ties for bringing prosperity to their respective peoples. The US has acknowledged the dispute of Kashmir, and now India wants the former to also count Balochistan as a disputed territory and Pakistan as a rogue state, which is contrary to the facts. The US has never declared Pakistan a terrorist state. Rather, it has only reiterated its demand that the latter” do more” for elimination of militancy and launch a crackdown against Taliban and other militant groups without any discrimination. India’s propaganda can be termed childish without any solid grounds.

Instead of becoming a joke on the stage of international relations, both Pakistan and India should act wisely for the sake of their peoples. Wisdom calls for friendship, peace, trade and a bilateral social relationship. Both countries should behave like mature and responsible sovereign countries. Instead of wasting their time and energies on irrelevant rivalries, they should focus their attention on fighting poverty, ignorance, diseases and socio-economic injustices in the region. * 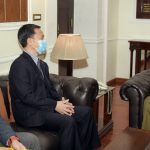