Aurat Azadi March (Islamabad, Quetta, Peshawar, Hyderabad and Sukkur) or Aurat March (in Lahore and Karachi) is hardly a couple days away and, the patriarchal order is shaking with rage. A society which violently lashes out at a women’s movement is ruled by an authority that is threatened by the idea of a woman demanding her rights. The nature of this authority is without logic or reason. Although every citizen has the right to protest, this right is denied to women. This authority follows archaic conservative principles of obedience, blind faith and, strict control of thought. And, women are not free in this society. The good news is that Aurat Azadi March has started to crack this facade and, is gaining critical mass, maybe not in numbers but at least in influence on mainstream domestic and international news, everyday references, and some public consciousness. 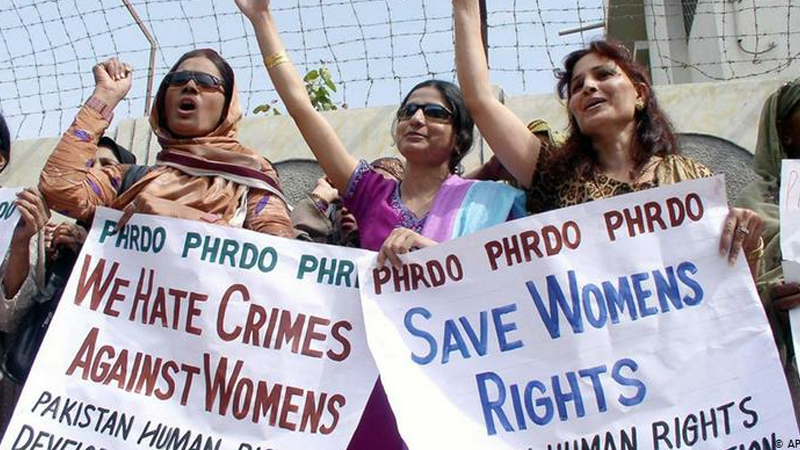 In the past few weeks, the moral and righteous filed petitions to stop the March in Islamabad, Karachi and Lahore. Maulana Fazlur Rahman threatened the Aurat March and asked his followers to do the right thing and make “sacrifices”. Aurat March posters have been torn down. Videos recording the vandalism have been made and uploaded on Aurat March social media accounts to taunt women. An almost completed mural of two women was vandalised by Jamia Hafza (even claimed by them) in the presence of Islamabad Police. The NOC, too, will be a given as a favour until the last minute, even though right to peaceful assembly and protest is a Constitutional right of citizens.

While the courts are doing their job in throwing out these petitions, the police are standing by while murals and posters are being vandalised. And what to do about the Maulana? Who will file a petition against him inciting violence against women?

The Aurat March crops up on TV talk shows, the centre of very small and ineffective conversations about the merits/demerits of feminism. These talk show panels are represented by feminists, hapless confused liberal men and, then advocates of religion and, culture. Most of these anchors spinelessly favour those who preach religion and, the conversations are not moderated professionally or with any logic. There is hardly any moral outrage at the threats of violence and, threats of suppression by the right wing forces on these talk shows or on news bulletins. What did get more air time, though, was Khalilur Rehman ‘s violent abuse of Marvi Sirmed on a talk show on Neo TV. Feminists and women are in uproar, always defending without discrimination any woman who is bullied. What’s the general reaction? A handful condemn Khalil while everyone else on social media is squirming politely, declaring that both Khalil and Marvi have extremist mindsets. Marvi, a feminist, represents an extreme mind set.

I am fortunate enough to have become involved with the organising efforts of Aurat Azadi March here in Islamabad and, I am seething in anger at the violent outbursts the surrounding impunity. While updating our social media pages with charters, infographics, beautiful art work, photographs of grassroots mobilisation and meetings, videos explaining the March, I am outraged at both the filthy abuse online and, by the mindset that normalises this misogyny. Feminism is discredited and abused with lazy arguments. What does get unleashed for each social media post is an insatiable sport of degrading women – men seem to relish the opportunity to shame, abuse and suppress women.

This past year of being immersed in feminist circles, attending study circles, meetings and, protests has given me the privilege to see feminist resistance up close. Feminists are studying and addressing systemic violence, inequality, injustice in both the public and domestic spheres. The whole crop of young feminists has joined the movement because of leftist leanings, alliances, and networks. Most of the women are young students, activists and, fairly normal/average backgrounds. Many are struggling to pay the bills, attend to family duties and, do all the emotional and physical work that a young woman is expected to do. And they still show up for feminism.

And, if you haven’t noticed, women are full of rage. Glorious rage! They are angry at the horrific violence women suffer. That entire patriarchal culture and system perpetuates this violence and asks us to look away. That women are tied up in the domestic sphere; they are not allowed to leave; they are victim to domestic violence and chained to unpaid domestic and biological labour. And, even if women do leave the home, they aren’t safe from harassment, violence or discrimination. They don’t hate men but do hate those who perpetuate and justify violence against women. All my life I have been told I’m too angry or get too worked about the issues, which bother me; and it’s a relief to be among women who are seething with rage and, want to do something about it. Rage against injustice is a powerful emotion and, is being distilled into feminist resistance.

Around the time I was slowing coming into my own as a feminist, I did think a lot about the transformations a woman goes through in her life. I studied hard and, worked hard. I earned good money and traveled the world. My family was proud but my personal life choices did not live up to the family’s idea of a good woman. To think we good girls spent our prime years working hard, earning money and trying to make our families proud but the conservative mindset doesn’t accept the full measure of a woman and, all her choices and desires. We still fall short and, our families begrudge and shame us for living our own lives. We are trained to chase the markers of a successful life but not to fight for our sisters’ and mothers’ and friends’ rights.

Feminists have set in motion the second wave of feminism in this country and, everything is on the table. Today, a feminist is fighting for her right to work, study, be safe, talk, have personal freedoms and protest. She is done being a conservative society’s ‘good woman.’ She will not beg or be apologetic or tone down. Today’s feminist is fiercely political and, full of rage. She is holding the mirror up to society and, unfortunately men do not like what they see and are lashing out. She will still hold up the mirror, yell a bold slogan, write a manifesto and, analyse your class system. She has read and studied it. You can’t fight informed resistance with lame references to culture and tehzeeb and also rain down dirty abuses in one breath. Your authority is self-contradictory and full of holes.

The Aurat Azadi March is happening today. The organisers and volunteers are working hard, finalising a million details for the big day. Placards (yes, those magic mirrors) are being prepared, dozens and dozens of bright chart paper, paints and brushes in hand. Online activism is going on non-stop to make sure everyone knows about the March. Mobilisation is ongoing on university campuses (as tightly controlled as they are), katchi abadis, market places, offices, and streets.

Meanwhile, it is hoped that more men will attend the March this year and, the charter of demands will be more widely understood and accepted. It is hoped the state will finally start to engage with the feminist movement. Didn’t the fall of the Berlin Wall come as a surprise? And, it is high time that mainstream media (print and television) covers this movement adequately and, carefully, not for an idiotic night talk show, but with the due attention it requires. The public should be informed about the movement, what it stands for, how it started and how it has grown.