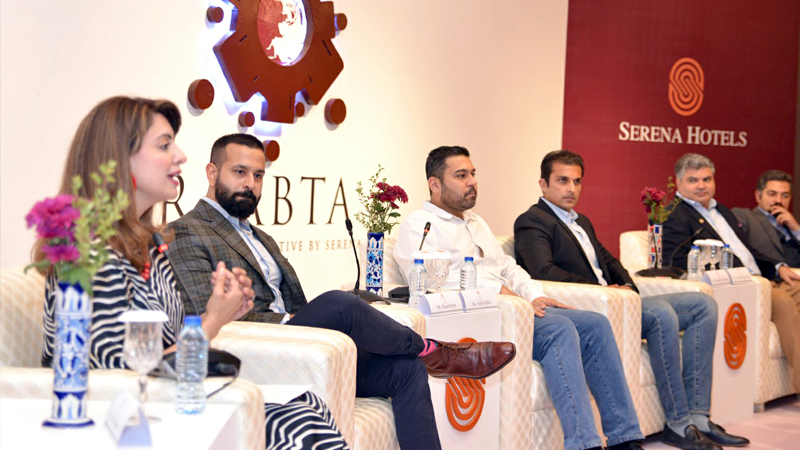 A high-profile panel discussion on Pakistan’s digital future attended by prominent players in the local digital industry was hosted by Serena hotels as part of its public diplomacy initiative called ‘Raabta’.

The event titled ‘Re imagine our Digital Future – Preparing to Thrive or Survive?’ was hosted by raabta curator and prominent journalist Sidra Iqbal.

A lively and thought-provoking discussion was held about the challenges facing the local digital economy in face of its rapid expansion, and the challenges and opportunities this brings in terms of innovation, governance, job market, cyber risks, regulation and ease of doing business.

“The focus of the event is to discuss the potential benefits and costs arising from global digital technology changes and, importantly, anticipate public policy solutions to emerging problems that will shape the future of society and the economy for generations to come,” said Sidra Iqbal. “Change can come within a generation if managed properly, rather than waiting for millennia. We are asking if the policymakers going to be reactive to the digital revolution or take the bull by the horn and prepare an environment for the digital economy to thrive?”

The keynote speaker at the event was ‘Digital Pakistan’ initiative chief Tania Aidrus, who spoke about the five pillars that form the cornerstone of the government’s digital policy, which include access and connectivity, digital infrastructure, e Government and digital skilling. Tania said the response to the PM’s digital initiative was overwhelmingly good and it felt like a movement already. She said a lot is happening in the digital arena but it’s important to keep an end view in sight and take a strategic approach. She said the efforts at provincial and federal levels have to be synchronized to achieve the objectives on a broader scale. She said the internet is a democratizing force and digital allows equitable access to knowledge provided the affordability of digital infrastructure was enabled and commodities like the internet are not taxed as a luxury item.

Zeeshan Hasib Baig said that Careem has enabled 500,000 jobs which shows that going digital will not take away jobs as some fear, however it will change the way we work and make it more efficient so the focus can be on better quality leading to productivity gains. He said digital companies like Careem are improving livelihoods, moreover they are allowing females much better mobility for work and leisure.

Ali Naseer from Jazz said “we need to change the lens of how we look at things and there needs to be a paradigm shift in our traditional processes to allow for digital to be effective lest we become redundant.” “Whilst we have 3G/4G broadband license since 2014 but less than 40% of the population is connected on broadband currently which is a travesty.”

MD of online selling platform Daraz.pk Ehsan Saya spoke about digitization boosting the trade industry like never before despite the fact that the majority of the population is not accustomed to buying online. He said the e-commerce will pick up eventually when the government improves regulation.

CEO Serena Aziz Boolani thanked the esteemed panelists for making themselves available for the event and said, “At Serena we promote and support sports, adventure tourism, culture and dialogue through our various diplomacy initiatives. The idea is to foster inclusive dialogue with the aspiration of building a sustainable future.”