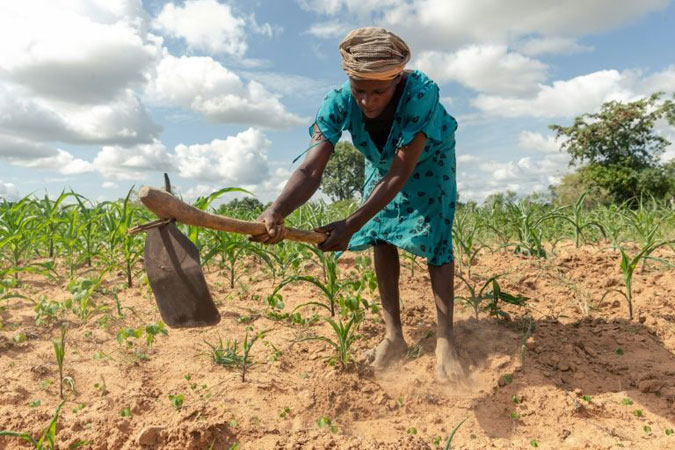 Just under a year ago, Alice Posha fled her home in the middle of the night and then watched as it was swept away by floods.

The torrential rain came from Cyclone Idai, one of the worst storms ever to hit Africa and the fiercest on record to strike Buhera, a district in the usually arid province of Manicaland in eastern Zimbabwe.

Today, the scene in Buhera is entirely different. But the misery remains.

The 60-year-old, who was rehoused in October, is going through the motions of weeding a field of maize that has been withered by the worst drought in 35 years.

A little rain for her corn would be more than welcome.

“Seeing how the maize is wilting, we may have a very bad harvest,” she said.

It is a scene that is being played out across southern Africa, where chronic lack of rain is threatening mass hunger and ruin.

Climate is being fingered as the big culprit.

In the space of 10 months, Buhera and many districts like it have been hammered by extremes that scientists say are consistent with forecasts about climate change.

In March 2019, the arrival of Idai unleashed devastation on eastern Zimbabwe and its neighbours Mozambique and Malawi.

Over a thousand people died and the lives of millions of others were badly affected.

“Our chickens and turkeys were swept away,” said Posha’s sister-in-law, Josephine Ganye, who now depends on food aid.

She is among the 45 million people in southern Africa that the UN has said are threatened by famine.

“This hunger crisis is on a scale we’ve not seen before and the evidence shows it’s going to get worse,” said Lola Castro, WFP’s regional director in southern Africa.

For the past five years, the entire southern tip of the African continent, where average temperatures are rising twice as fast as the global mean, has suffered from a significant lack of rain.

Every farmer, big or small, has been affected as well as breeders, hoteliers and teachers.

In Zimbabwe, the drought has added to a long list of crises, from stratospheric inflation to shortages of cash, petrol, medicines, water and electricity.

For many, daily life has become a nightmare.

“Almost everybody in my area is food insecure,” said 68-year-old Janson Neshava, who is a headman, or senior leader, in Buhera.

“We still do the traditional rain ceremonies, but to no avail. Even the wetlands are now dry and streams that used to flow throughout the year are all dry.”

The WFP says that 60 percent of Zimbabwe’s 15 million people are currently food insecure.

According to Patience Dhinda, a local official, this figure hits 80 percent in Buhera where the grain depot, which should house the state food aid, stands empty.

A year ago, the crops in Buhera had already suffered from drought before being washed away by Idai. This year they risk being burned to a crisp by the relentless sun.

One meal a day

Around 800 kilometres (500 miles) further west, across the border in Zambia, first impressions suggest that the contrast is startling.

The grass is tall, the roads muddy and the fields of maize are a vibrant, healthy green.

In the village of Simumbwe, an hour and a half’s drive south on a dusty road from Kalomo in the southwest of the country, the rains arrived in late December.

But in the shade of the majestic trees, seated on the red earth, perched in the branches or on oxcarts, hundreds of people wait patiently for food to be distributed by an NGO, World Vision, and the WFP.

Last year, the harvest was catastrophic for the second year running with up to 70 percent of the crops lost to the drought.

“Last year, I harvested 18 kilos (39.6 pounds) of food. In other words, nothing,” said Loveness Haneumba, mother of five and a “happy” beneficiary of aid in Simumbwe.

“It is common that we eat once a day. The children ask me: ‘what are we going to eat?’ I answer: ‘Just wait. Let me look around’.”

It is a question of buying time.

For several years, the rainy season has been getting later and shorter, upsetting the traditional farming cycle. It used to be from October to May; now it is barely from December to April.

“The food we have here is not enough to cater for everyone,” said Derick Mulilo, the World Vision food monitor in the yard of the school in Simumbwe. “We are focussing on the most vulnerable.”

He meant people like Loveness Haneumba and her stunted children. Her six-year-old daughter looked four and her four-year-old had the appearance of a two-year-old toddler.

Lizzy Kayoba, another mother of a large family, also featured on the list of beneficiaries. She had walked five hours during the night, her youngest on her back, to arrive at dawn for the food handout.

“It will last me one or two weeks,” she said. The next distribution at the school is a month away.

A teacher, Teddy Siafweba, said about 15 children in his class were absent that day because of hunger. In the classroom next door, about 30 were missing — nearly half of the rollcall of 70.

And those who came often have an empty stomach. Some nod off in class, said another teacher, Tryness Kayuni.

The 33-year-old watched the handout with a heavy heart. She was not one of the 862 beneficiaries.

A single mother, Kayuni was not considered a priority as she had a job.

And yet she had not been paid since September.

Since then she had been holding out on one meal a day.

“How do I survive?” she said. “I ask my colleagues if they can help me with some food.”

Funding is desperately needed to meet the needs of the 2.3 million people in Zambia who sorely need food. The WFP has received only a third of the $36 million required.

Thieves steal food supplies and unscrupulous men promise to put women’s names on the food list in exchange for unprotected sex. That is not something that worried single mother Imelda Hicoombolwa, 49, who for the last three years has been one of a number of small farmers who gambled on agricultural diversification, opting for nutritious vegetables and using techniques adapted to climate change.