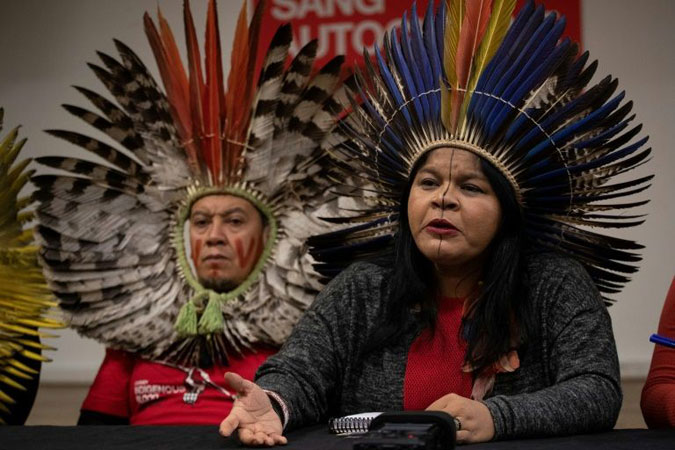 Brazilian President Jair Bolsonaro has unveiled a sweeping plan for the Amazon rainforest that would open indigenous lands to mining — a “dream” for the far-right leader, but a “nightmare” for environmentalists and tribal leaders.

He further stoked controversy by naming a former Evangelical missionary to head the government department responsible for protecting isolated indigenous groups in Brazil, which is home to at least 100 uncontacted tribes, more than any other country.

Together, the measures underlined the Brazilian president’s committment to two key groups of supporters: conservative Evangelical Christians and agrobusiness.

But they drew outrage from other quarters.

“Bolsonaro’s dream is our nightmare, and it will be our extermination. The mining industry brings death, disease, and misery, and it will be the end of our children’s future,” said Sonia Guajajara, of the Brazilian Indigenous People’s Assembly (APIB).

The clash showed Bolsonaro’s determination to press ahead with his agenda for the Amazon basin region, despite international condemnation of his policies last year, when record fires raged in the rainforest and the rate of deforestation nearly doubled.

The Brazilian government has convened a string of meetings with foreign diplomats in recent weeks to make its case for the benefits of the new bill.

But quiet diplomacy is not Bolsonaro’s strong suit. The so-called “Tropical Trump” has shown a knack for infuriating and insulting opponents.

“We will be pressured by the environmentalists. Those people, if I could, I would confine them to the Amazon region, since they like the environment so much,” Bolsonaro said in announcing the new bill.

As for indigenous peoples, they are “human beings just like us,” he added, in what many condemned as a patronizing line.

The bill would amend Article 231 of the Brazilian Constitution, which deals with mining and hydroelectric projects on protected indigenous lands.

The new law would require companies to pay indigenous communities to operate on their land.

“These initiatives are enormously worrying, because they will likely lead to disputes between indigenous groups, aggravating instability,” said Joao Paulo Capobianco, head of the Institute for Democracy and Sustainability.

But they “were not unexpected,” he told AFP. “Ever since this government came to power (in January 2019), it has… compromised the interests of indigenous peoples and the environment.”

‘Fox in the henhouse’

It only added fuel to the fire when Bolsonaro named anthropologist and Evangelical missionary Ricardo Lopes Dias to head the department on isolated tribes at FUNAI, the government agency for indigenous affairs.

FUNAI has thus far sought to protect isolated groups from diseases and other threats from the outside world, even as illegal logging and farming have encroached on their territory.

“Putting an evangelical missionary in charge of the uncontacted Indians department of FUNAI is like putting a fox in charge of the hen house. It’s an open act of aggression, a declaration that they want to forcibly contact these tribes, which will destroy them,” said Sarah Shenker of indigenous rights group Survival International.

From 1997 to 2007, Lopes Dias was a member of a US missionary group called New Tribes Mission, now known as Ethnos360, though he has pledged not to engage in evangelical work in his new post.

The promise has met with skepticism.

“Our families have suffered historically from the actions of proselytizing missionaries, including many from New Tribes Mission,” the Council of Brazilian Amazon Indigenous Organizations (COIAB) said in a statement.

“They forced contact with our grandfathers and grandmothers through lies, violence and death threats.”