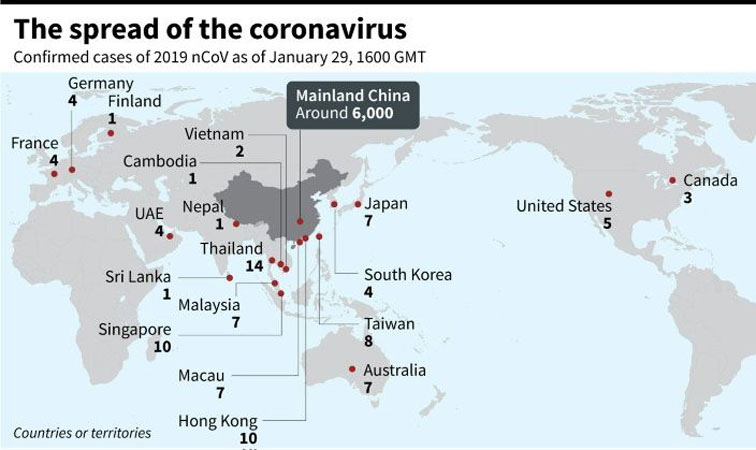 The World Health Organization on Wednesday warned all governments to “take action” over the deadly SARS-like virus spreading from China, as hundreds of foreigners were evacuated from the epicentre of the outbreak.

So far, the novel coronavirus has claimed 132 lives in China and infected more than 6,000 people in the country and elsewhere. New cases were reported in Finland and the United Arab Emirates.

The WHO called an urgent meeting for Thursday over whether the viral epidemic should be declared a global health emergency — a designation that can lead to increased international coordination.

Airlines around the world are either suspending or paring back services in and out of China, following cases of human-to-human transmission outside the country.

In the sporting world, the World Indoor Athletics Championships set for March in Nanjing have been pushed back to 2021, and World Cup skiing races have been cancelled.

“WHO is monitoring this outbreak every moment of every day,” the organization’s chief Tedros Adhanom Ghebreyesus said in Geneva, as he announced his decision to convene crisis talks.

On Twitter, Tedros said the organisation “deeply regrets” what he called a “human error” in WHO reports last week that referred to the global risk of the outbreak as “moderate” instead of “high”.

Ryan said declaring a global health emergency could streamline the measures taken — a preferable scenario to the “potential recipe for disaster” of nearly 200 nations acting individually.

Both Tedros and Ryan hailed China for its “extraordinary” efforts so far to contain the epidemic.

In China, some countries worked to airlift their citizens out of the central city of Wuhan, whose 11 million residents are now under strict quarantine.

A US charter flight from Wuhan with about 210 Americans on board, including consular staff, was met at a California military base on Wednesday by emergency vehicles with flashing lights and personnel in white biological hazard suits.

The evacuees will be monitored for symptoms and sent to local hospitals if they are found to be ill, the Pentagon said.

More than 200 Japanese nationals were brought home Wednesday, but only a handful of them were hospitalised for tests after they reported they felt unwell or showed flu-like symptoms.

Some 250 French citizens and 100 other Europeans will be flown out of Wuhan on board two French planes this week.

Australia plans to house any citizens evacuated on an island normally used to detain asylum seekers.

A growing number of governments — including the United States, Britain and Germany — have advised their citizens to avoid non-essential travel to China.

China has urged its own citizens to delay trips abroad, with more than 15 other countries having confirmed cases of the disease, including three with cases of human-to-human transmission.

British Airways was the first major airline to announce a suspension of flights to and from China, citing the travel advice of Britain’s foreign office.

Many others followed suit, including German flag carrier Lufthansa, which said all flights to mainland China would be suspended until February 9.

Others pared back their service, like American Airlines, KLM and United.

In one of the most dramatic measures, the Pacific nation of Papua New Guinea announced no travellers from Asia would be allowed in.

“Although the numbers outside China are still relatively small, they hold the potential for a much larger outbreak,” Tedros said.

‘I need to buy food’

China has effectively cut off Hubei province to try to contain the spread of the virus, banned tour groups from travelling overseas, suspended classes and extended the Lunar New Year holiday.

Most street traffic in and around Wuhan — where the virus originated in a wild animal market — has been banned, leaving more than 50 million people shuttered in their homes.

“This is the first day since the lockdown that I’ve had to go out,” a man in his 50s told AFP on the mostly deserted streets of the industrial city on Wednesday.

“I have no choice because I need to buy food.”

The number of confirmed cases across China climbed to 5,974, while the death toll nationwide jumped to 132.

The scale of the deepening crisis was emphasised with the total number of infections on the Chinese mainland exceeding that of the Severe Acute Respiratory Syndrome (SARS) outbreak of 2002-03.

But the death toll is so far much lower than SARS, which claimed nearly 800 lives around the world — with most fatalities in mainland China and Hong Kong.

The virus has rattled global markets and started to dent the Chinese economy.

Japanese automaker Toyota said it would keep its plants in China closed until at least February 9. Swedish furniture giant IKEA will temporarily close half of its 30 stores on the mainland.

Tech giant Foxconn said Wednesday that Taiwan staff at its vast network of factories in China do not need to return to work until mid-February, a move threatening supply chains for everything from iPhones to flat-screen TVs and laptops.

US fast food giant McDonald’s said it had closed all its locations — “several hundred” restaurants — in Hubei.