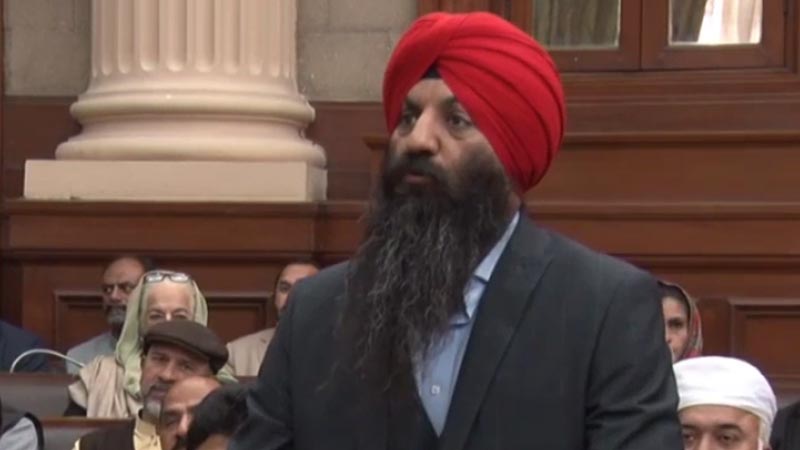 History was made in Punjab Assembly on Thursday as the second Sikh MPA became a member of the largest House and it will be for the first time in the parliamentary history of Punjab after partition that two Sikh MPAs will sit in the House at the same time.

As per the details, Sardar Ramesh Singh Arora of PML-N took oath as MPA on reserved seat and it will be history that two Sikh MPAs will sit in the same House as Mahindar Pal Singh of PTI is already an MPA who also holds the portfolio of Parliamentary Secretary for Minorities and Human Rights. It is pertinent to mention here that Ramesh Singh Arora was the first ever Sikh MPA of Punjab after partition when he took oath of his office last time in 2013 and now he became MPA for the second consecutive time on Thursday. The seat fell vacant after the death of PML-N MPA Munir Masih Khokhar who is now replaced by Arora whose name was right after Khokhar in the list of reserved seats submitted to the Election Commission of Pakistan by the PML-N.

“Yes, history was made today as two Sikh MPAs will sit in the Punjab Assembly from now and it is for the first time after 1947 partition,” said newly elected MPA Ramesh Singh Arora, while talking to Daily Times. I am grateful to my leader Nawaz Sharif who gave me the opportunity to become MPA for the second time, he said. The Sikh MPA also paid tribute to Nawaz Sharif and Army Chief Qamar Javed Bajwa for the Kartarpur Corridor. He was of the view that the old wish of Sikh community living in the whole world fulfilled when the Kartarpur Corridor was inaugurated last year.

“Pakistan became the first ever country in the world where the marriages of Sikh couples are registered as I submitted the Sikh Marriage Act bill in last tenure that was passed by the Punjab Assembly unanimously,” said MPA Arora. He told this scribe that he is also planning to bring some new legislation for the Sikh and other minority communities living in Punjab. I am ready to work with MPA Mahindar Pal Singh who is from the PTI as we both represent the same community and will work jointly for the noble cause, newly elected MPA said.

Later, Speaker Chaudhry Pervaiz Elahi warned the ministers to vacate the rooms they have occupied in the MPAs hostel because ministers already have government residences and therefore it is the right of MPAs to live in the hostels made for them. The luggage of ministers will be loaded in the trucks if they don’t vacate the MPAs hostels, warned Speaker Elahi. He was of the view that no new hostel for the MPAs was made in last ten years but we are now establishing a new hostel having 150 rooms for the MPAs. Earlier, answers related to the Youth Affairs and Archaeology departments were given by minister Rai Taimoor Bhatti during the question-hour.

Meanwhile, leader of the opposition Hamza Shahbaz lashed out at the government over the flour crisis while talking to media outside the Punjab Assembly on Thursday. “The in-house change is not an unconstitutional move and the doors of PML-N are open for everyone,” said Hamza, while giving a hint of change both in the centre and Punjab.