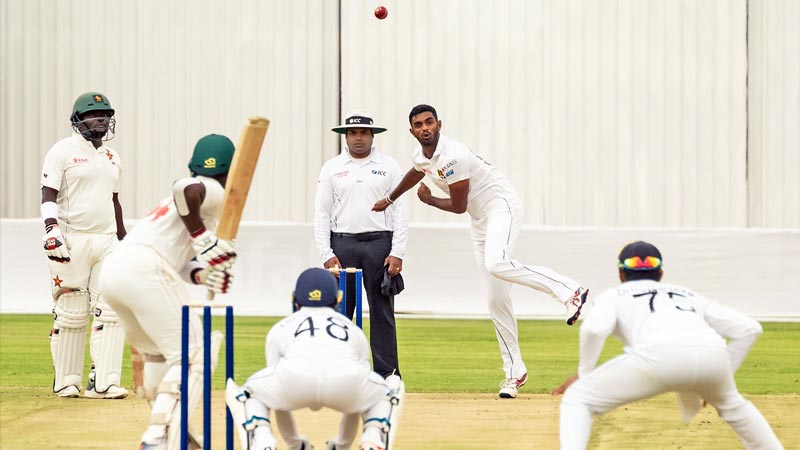 HARARE: Left-arm spinner Lasith Embuldeniya took five wickets as Sri Lanka bowled out hosts Zimbabwe out for 358 on day two of the first Test at the Harare Sports Club on Monday, but the home side will be pleased with their batting efforts on their return to test cricket. The tourists reached the close at 42 for one in their reply, a deficit of 316 runs that they will seek to wipe out on a slow pitch on day three in the first match of a two-Test series.

Captain Dimuth Karunaratne (12 not out) and Kusal Mendis (6 not out) are at the crease after Sri Lanka lost opener Oshada Fernando for 21, bowled by Donald Tiripano with the seamer’s first ball in the match. Zimbabwe had resumed on the second morning on 189 for two, but lost Brendan Taylor (21) early when he was trapped leg before by seamer Suranga Lakmal (3-53), who also accounted for top scorer Craig Ervine (85). Embuldeniya (5-115) then ate into the middle order, removing captain Sean Williams (18), the dangerous Sikandar Raza (41) and Regis Chakabva (8). He claimed his second five-wicket haul in Tests when he bowled Kyle Jarvis for one. Zimbabwe batted for 148 overs for their 358, showing great patience at the crease as they made Sri Lanka toil for their wickets. The tour was hastily arranged, having only been announced on Jan. 8. Zimbabwe, returning to test cricket for the first time since their tour of Bangladesh in 2018, were briefly suspended by the International Cricket Council last year because of government interference in the sport, but were reinstated in October. The second Test will also be played at the Harare Sports Club, starting on Jan. 27.