Assalam o Alaikum, You the Pakistani people have been my first and last love since the day first:

When the world was still to be born

When Adam was still to receive his form

Then my relationship began

When I heard the Lord’s voice

A voice sweet and clear

I said “yes” with all my heart

And formed a bond. 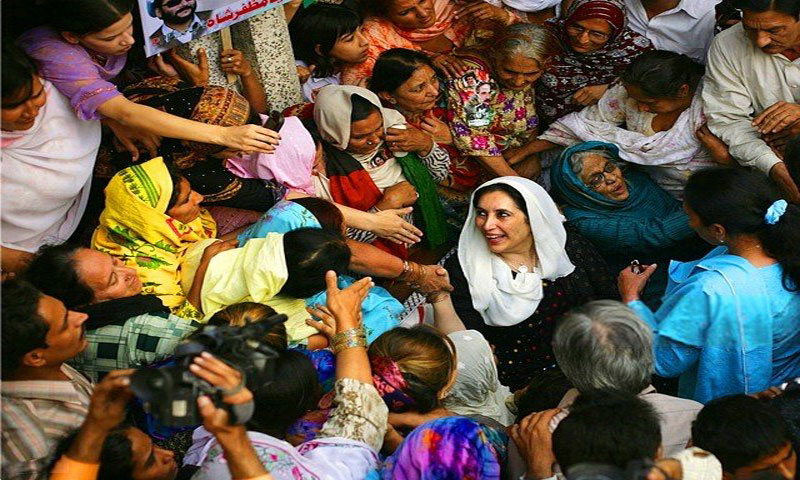 My bond with the people of Pakistan is based on the blood of a martyr– none other but my father Zulifqar Ali Bhutto. I followed suit and I was forced to leave this world from LiaqatBagh, Rawalpindi by the forces of evil on 27 December 2007. After 12 years, my son Bilawal is all set to reconnect the broken link right from the same place with the same passion and commitment. You know LiaqatBagh is at a stone’s throw from Bilawal House, Islamabad but my son took 12 years in this journey – no doubt a pilgrimage of ideology based on truth and patience. The crime we are blamed to commit is nothing but to grant all powers to people, the essence of our mission i.e. Bhuttoism.

After that, I struck another bond with myself to serve the Pakistani people even at the cost of my life like my father. How much I have kept my word to God and the people, what on earth can bear witness after God if not Pakistani people.

No doubt, nobody wishes to return to earth except the martyred, the one who is familiar with the reward of martyrdom.Sila e shaheedkiyahy tab o tab e javedana(The reward of a martyred is nothing but eternity).

Had I been given thousands lives, I would have no qualms to sacrifice all for my people. But there is no rehearsal of life. We the people are sent to play our part. So did I like my elders. However, the mission to serve the people by providing them with freedom, honour,employment, prosperity, education and health facilities is yet to be accomplished. Don’t worry; my son is there to start from the point where I left. On the eve of my 12th death anniversary at a time when Pakistan is again in the international spotlight. The terrorists who used the name of Islam to threaten its stability were defeated by Pak Army under the PPP government as the democratic forces believed terrorism could be eliminated by promoting principles of freedom.

I didn’t choose this life; it chose me. It’s not necessarily the life I would have chosen, but it has been a life of opportunity, responsibility and fulfillment.

I was born in Pakistan and my life mirrors its turbulence, its tragedies and its triumphs. I would have been passing my life full of luxuries while enjoying my favorite profession, had my father not been removed undemocratically from elected office of Prime Minister,and subsequently murdered judicially. In fact, a military dictator played a dangerous game of deception and intrigue. Fearful of losing power, it dithered, keeping the forces of modernization at bay while flames of terrorism flourished. In such circumstances, I had to come forward by breaking the chains of tyranny both in mufti and in khaki.

Pakistan is no ordinary country. And mine has been no ordinary life. My father and brothers were killed. My mother, my husband and I were all imprisoned. I spent long years in exile. Despite the difficulties and sorrows, however, I feel blessed that I could break the bastions of traditions by becoming Islam’s first elected woman Prime Minister. My coming into the office of Prime Minister opened the box of opportunities for the Muslim women around the world. Certainly, my life rekindled hope for change to millions who had no hope before.

While having a glance upon my life, you would find me a woman proud of my cultural and religious heritage. I always felt a special personal obligation to contrast the true Islam – the religion of tolerance and pluralism – with the caricature of my faith that terrorists have hijacked. I led my life as a symbol of what the extremists and terrorists most fear. I was a female political leader fighting to bring modernity, communication, education and technology to Pakistan. I believed that a democratic Pakistan could become a symbol of hope to more than one billion Muslims around the world who must choose between the forces of the past and the forces of the future.

My personal experience taught me a lot about the throne of thorns in the country. After me, Asif Ali Zardari, my husband and my party PPP was given the government of a country like that of a rudderless boat in stormy waters. I thank God that he could get the country out of the crisis during his five years in power. Despite all, he continued our mission and tried his level best to fulfill the promises made by me to the nation. Especially, he restored the Constitution of Pakistan in its original form by delegating the powers of presidency to parliament. He also granted provincial autonomy to strengthen the federation. He instituted Benazir Income Support Programme which reveals his love and loyalty to the cause of well-being of the people of Pakistan. However, there is still a long way to go. He looks a bit old now but I believe his love, determination as well as commitment to the people and the party have increased manifold.

It is up to my son Bilawal to spread the message of ours by introducing the politics of patience and veracity across the board. As said earlier, I didn’t choose this life; it chose me after the judicial murder of my father. We gave lives for the completion of our mission. Our party, a party of struggle, a party that serves, a party of the people and the party of martyrs has been bequeathed to my son. I know some people blame my son to be the member of a political dynasty. They did blame me too for the same. However, I proved myself to be the proud successor of my father after 30 years long political struggle so much so that even the worst critics are now seemed paying tribute to my work for the nation. My struggle speaks for itself. No doubt, good inheritance is a matter of pride. They are jealous of my son, his party and legacy. I am sure that one day my son would certainly prove his mettle in the domain of politics. He has brought the party to the summit of excellence in Sindh Province. I hope he would set new examples there in serving the people.

Punjab especially Lahore is the birth place of Pakistan Peoples Party – founded in 1967. A place from where I started struggle against the tyrant regime led by General Zia. Punjab is the land where Baba Bulley Shah and Baba Farid were born and spread the message of love and tolerance. The idea of roti, kapraa ur makaan was taken from Baba Bulley Shah’s poetry. My party led by my son must reclaim the paradise lost i.e Punjab so that Pakistan may become prosperous, peaceful and progressive as envisioned by its founder Muhammad Ali Jinnah.

The phoenix rises from the ashes

People power will be born again

I am beyond doubt that my son would fulfill the dreams of our people. He has been raising voice against terrorism and extremism despite all kinds of threats. Recently, he refused to use religion as a political tool against the rivals. He is vocal against curbs on media, stands by vulnerable segments of society, supports the minorities and other oppressed people, condemns violence in any form anywhere and hoists the flag of liberty and social justice. I am really proud of my son.

Looking at the conditions in my country from the outside, I realize that the stakes in Pakistan are now higher than ever before. The country is enmeshed in mammoth problems engulfing it with the passage of every single moment. Unnecessary interference made by the people in khaki and in mufti has devastated the system, political parties have been assaulted, NGOs have been under threat especially those deal with human rights, democratic values and women’s right. The press has been intimidated and students as well as labor unions have not been allowed to function. But the most dangerous manifestation of this retreat from democracy has been a growing sense of hopelessness of the people of Pakistan, and a total disillusionment with the political system’s ability to address their daily problems. All the indicators of quality of life have spiraled down, from employment to education to housing to health care. And as people’s sense of disillusionment has grown, there has been a corresponding frown in the spread of religious and political extremism. The failure of the regime has made our citizens open to extra governmental experimentation with fanaticism. Cutting short, social discontent combined with political alienation, international isolation, and an empty treasure unable to pay debts can prove a devastating mix. It is time to give a rethink to national policy. Here, I am convinced that the country needs a progressive leader who could form democratic and rightly elected government by the people in the country. By rejecting wrong and embracing right, these days of despot will soon go. I am hopeful that my son and my party will emerge as saviors of the rights of their fellow countrymen and women.