In a patriarchal society, men are considered superior and women submissive. Generally, men are free to exercise their power and not to tolerate mistakes by the opposite gender. A patriarchal society defines the role of genders, where women are submissive while men are powerful and ‘macho’and may show their authority by any means. As Robert K Merton discusses in his Strain Theory, it is the culture or society that defines roles for individuals, and then people exhibita particular behavior to justify those roles. To be macho and to exercise his power, a man may find his wife an easy target in a patriarchal society. Resultantly, a woman becomes a victim and a source of male ego satisfaction, and bears domestic violence and abuse. 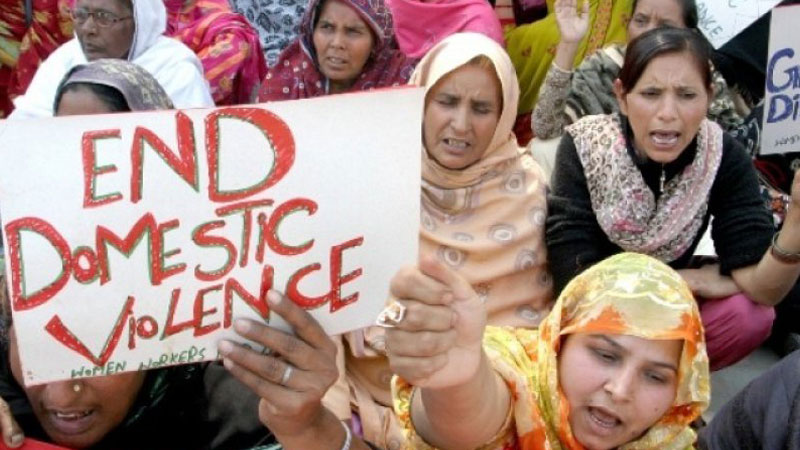 Pakistan, if viewed with the lens of male dominancy, may be considered a patriarchal society,with an increasing phenomenon of domestic violence. Data shows that women in Pakistan face staggering violence in the form of physical, mental, emotional and sexual abuse. This situation has deprived them of their basic rights, including rights of money, health and peace of mind.

According to the 2013 research of the National Institute of Population Studies in Pakistan, 32 percent of women have suffered physical violence, and about 40 percent of women who have ever been married have suffered conjugal abuse at some point in their marital lives. Violence in different forms, such as rape, honour killings, acid attacks, physical abuse, threats, verbal abuse and constant criticism, is commonplace for females. The feudal system has also created problems for women by raising the slogan of ‘zan, zaraurzameen’ (woman, money and land); this phraseis used to blame women for men’s wrongdoings.

Domestic violence also has serious and long-lasting health repercussions. This issue has emerged as an important concern in public health. Violence is prevalent in almost all classes and sections of society. One of the worstaspectsof the issue is the consideration of domestic violence as a private matterin which no formal intervention is usually witnessed.

Ignoring the ‘stigma’ of keeping it a private matter and maintaining a façade for social acceptance there are multiple reasons why violence needs to be identified.Currently, the number of registered cases of violence is quite low.

Women need to realise that their silence against violence is fuel to patriarchy, and is a danger to their lives and the generations to come

The silence of the victim in the majority of the cases of domestic violence is a major reason for the low number of registered cases. According to a study, most victims, almost 90 percent, prefer to keep quiet as a strategy to minimise exacerbating factors. Victims of violence, mostly women, sometimes view the perpetrator as all-powerful and impervious to any exterior pressure. The victim feels that no one could deal with the individual hitting her, and if reported, the risk of violence would be increased.

In a patriarchal society, most males have accepted the idea that they have all the rights to have strong control over their female family members. Women prefer to stay silent not only in Pakistan but also in other South Asian countries because it is believed that silence is the only resort andnothing might be ofhelp. Multiple reasons force women to stay silent, and the rootcause of all reasons lie in the acceptance of violence as a normal thing.

Government has taken notice in the last few years. Punjab, Sindh and Balochistan have laws for domestic violence. Unfortunately, religious parties are creating hurdles in passing any such law in Khyber Pakhtunkhwa. However, no law can be of any help unless the victim speaks against the violence. It is essential to ponder upon the need to have further legislation with the emphasis on strong implementation.

A few months ago,a wife and mother, Fatima Sohail, spoke against the violent behaviour of her husband and actor, Mohsin Haider. She received agreat deal of support fromthe civil society, but there wasalso criticism. Many suggested that she should make a compromise.That seems to be a common practice, and it compels women to stay silent for the sake of family.

It is high time femalesare sensitised and educated that an abusive relationship doesnot do any good but harmsa lot. Awareness campaigns in media about domestic violence and getting legal aid could be one solution to end the silence of the victim. Sharmeen ObaidChinoy’s award-winning documentary on domestic violence is one effort thatshould be appreciated.Police personnel shouldbe trained for the identification of cases of domestic violence and registration of an FIR.

Women need to realise that their silence against violence is fuel to patriarchy, and is a danger to their lives and the generations to come.

The writers are researchers at the Sustainable Development Policy Institute