‘Children are innocent’: Albanians beg for return of IS youngsters 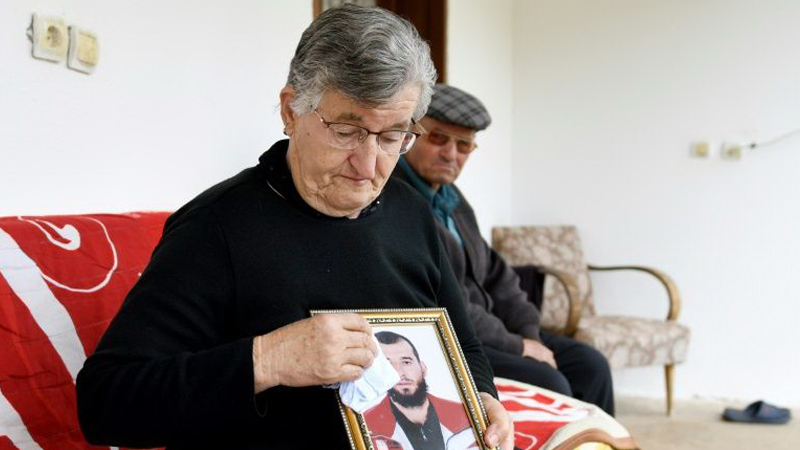 After media interest helped mobilise the evacuation of an Albanian boy from northern Syria last month, families of other children of Islamic State fighters are pleading with Tirana to redouble its efforts and bring the rest home.

Alvin Berisha, an 11-year-old Albanian boy from Italy, was rescued from a Kurdish-run prison camp in Syria in November after a popular Italian TV show whipped up support for his plight.

The boy’s homecoming has also opened a ray of hope for other families in Albania who have been struggling for years to bring back youth snatched by their jihadist parents.

“I am happy for him but I am anxious for my two children who are still there in the middle of this hell,” says Mide Dumani, a 46-year-old mother who lives on the outskirts of Tirana, her entire body shaking with nerves.

Her children are among around 30 Albanian youngsters that Tirana believes are stuck in Syria.

Most are in the dusty Al-Hol encampment, a tent city home to more than 70,000 people, mostly relatives of IS militants, who were rounded up by Kurds.

Dumani has not seen her two children since her husband ferried them off to Syria in February 2014.

He was killed a few months later, leaving Eva and Endri, now aged 13 and 11, to fend for their own.

“I am a mother. It’s been six years, I can’t take it anymore,” Dumani says, gripping a notebook that contains her daughter’s first English lesson, with the words “good morning” written in a neat script.

“So many broken dreams,” she mumbles.

From time to time, she receives phone calls and messages from Eva.

“Life inside the camp is very hard. We are all in danger,” her daughter wrote in a recent WhatsApp message.

Over the past six years, Dumani’s relatives have gone to Turkey and to Egypt in desperate attempts to make contacts to get the children out.

Their 72-year-old grandmother Mentie has also gone to Syria twice.

The first time she tried to convince her son to come home.

Then, after his death, she attempted to retrieve the grandchildren but found herself stuck with them in Al-Hol, where she remains today.

Mide Dumani has now pinned all of her hope on the Albanian government, who helped Damascus and Rome with the return of Alvin Berisha.

“May they be with their families, with their mothers, so that they can grow up like all the others,” she pleaded.

Since the fall in March of the IS “caliphate” proclaimed in 2014, the international community has struggled with the thorny task of repatriating relatives of militants who were captured or killed in Syria and Iraq.

The huge number of people in the overcrowded Al-Hol camp has also created a headache for the semi-autonomous Kurdish administration.

Western European countries have been slow in returning their own citizens.

According to official figures, some 144 people from Albania, a country with a Muslim majority, left to join IS between 2012 and 2014, when the Balkan state passed a law punishing participation in foreign conflicts.

“For Albania, the priority is to get the children out,” Deputy Interior Minister Romina Kuko told AFP.

But there are many complications.

“There are problems in identifying children born locally who do not have Albanian nationality,” she said.

The number of these children is unknown, and according to security experts, identifying them would require field investigations and possible DNA testing.

Authorities are also faced with the issue of mothers who have allegedly participated in the fighting and are liable to prosecution.

“We have to ask ourselves the question: Why did the parents leave? What is our (legal) duty towards them?” said Kuko.

With that comes the ethical dilemma of separating mothers from children.

“We must be careful not to cause another traumatic shock to these children,” Kuko added.

‘Come and get us’

The return of young Alvin also touched a nerve with 82-year-old Dylber Shuli, an Albanian overwhelmed with worry about his five grandchildren held in Al-Hol.

“Children are innocent, they must not pay for their parents’ irresponsible behaviour,” he said outside his home in the rural southeastern Albanian village of Gurras.

His 32-year-old son Krenar left in October 2013 with his wife Adelina and their three daughters Elona, Erma and Justra. A son, Ibrahim, was born in 2016.

At age 13 Elona was forced by her parents to marry another Albanian IS fighter from their village, Shuli said.

But after her parents and husband were eventually killed, Elona, now 17, has been raising her two-year-old son, three-year-old brother and two young sisters on her own.

In a message published by Albanian TV, the teenager pleaded for help: “Come and get us, we expect terrible days.”

“She’s desperate. She thought of suicide to escape this terror,” says Shuli.