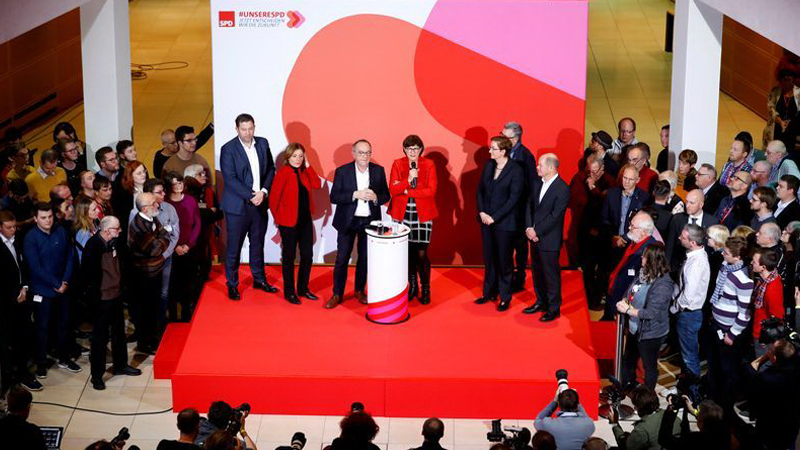 The future of Germany’s ruling coalition looks shaky after the weekend election of new leaders of the Social Democrats (SPD) who are demanding a shift in policies, which Chancellor Angela Merkel’s conservatives have rebuffed.

Two strong leftist critics of the coalition with Merkel’s conservatives – Norbert Walter-Borjans and Saskia Esken – won a vote for leadership of the SPD on Saturday, putting the country, Europe’s largest economy, at a political crossroads.

The pair want to renegotiate the coalition deal to focus more on social justice, investment and climate policies, setting them on collision with the conservative ‘Union’, who want to stick to the existing coalition deal. Attention will shift quickly to an SPD party conference starting on Dec. 6, at which delegates are set to approve the new leadership and also vote on a yet-to-be published motion on the coalition.

Here are the main scenarios for Germany now that the future of the coalition is in doubt:

SPD Stays In The Coalition

Despite grassroots SPD members being fed up of propping up Merkel in power, senior conservatives believe the most likely scenario is that Walter-Borjans and Esken opt to stay in the ruling ‘grand coalition’.

The SPD is polling at around around 15% in polls, down from the 20.5% it won in the 2017 national election, and so risks losing parliamentary seats and plunging deeper into existential crisis if it breaks off the coalition and new elections ensue.

To stay in the coalition, Walter-Borjans and Esken could negotiate an enhanced coalition deal with concessions from the conservatives. Alternatively, they could define the party’s demands for the next national election, due in 2021, while at the same time committing to the existing coalition agreement.

Conservatives stress they would not agree to certain demands, such as a significantly higher minimum wage. Should the SPD insist on these, it would have no choice but to quit the government, opening the way for minority rule by Merkel’s Christian Democrats (CDU) and their Bavarian sister party, the Christian Social Union (CSU).

Under this scenario, Merkel would remain chancellor as there would be no majority in the Bundestag lower house of parliament for another conservative chancellor. Merkel, looking ahead to Germany’s European Union presidency starting on July 1, 2020, is not keen on the idea. Supporters of the idea, however, note that the 2020 federal budget has been passed, so a minority government could rule relatively trouble-free until spring 2021.

Fresh Negotiations On A ‘Jamica’ Coalition

Should the existing coalition collapse, it is conceivable that the conservatives could take up negotiations on forming a ruling alliance with the ecologist Greens the business-friendly Free Democrats (FDP) – a tie-up known as “Jamaica” for its party colours matching that country’s black, yellow and green flag. The three parties held coalition talks after the 2017 election, only for the negotiations to collapse when the FDP pulled out.

However, the Greens have enjoyed a surge in support since 2017 and have more interest in new elections than revisiting coalition negotiations. Furthermore, the existing parliamentary term is already half way through its course. By the time a fresh coalition deal were negotiated and new ministers familiar with their portfolios, the next election campaign would be starting.