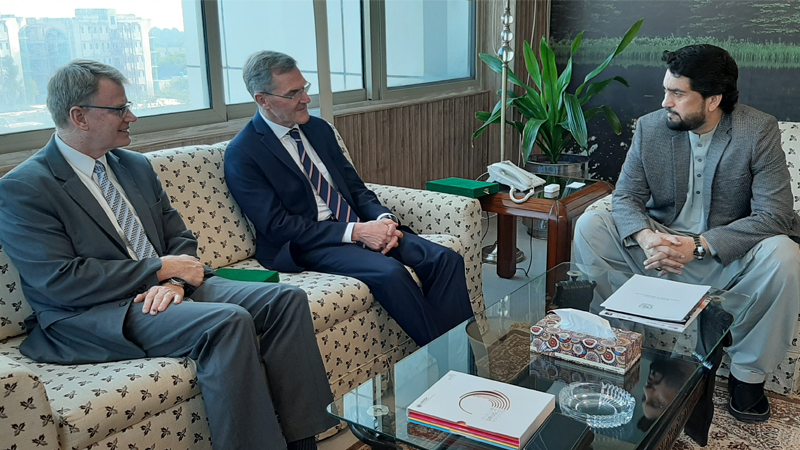 Minister for Narcotics Control and SAFRON Shehryar Khan Afridi Friday urged the Christian scholars to raise their voice for eight million Kashmiris who have been caged in the biggest human prison ever by India’s fascist regime.

A delegation from The Church of Jesus Christ of Latter-Day Saints called on the minister here. Peter F Merus, Asia President, Bradley R Hansen, Mission President and Imran Shaukat, President Pakistan were part of the delegation.

Afridi said the Christian leadership needs to build pressure over the Modi government to lift siege in Kashmir where around one million Indian security officials were committing worst crimes against humanity. He said it is unfortunate to note that the United Nations has failed to take action against India over recovery of mass graves in the occupied valley and unfortunately no practical steps have been taken by the world to investigate the crimes against humanity by Indian army which is tantamount to giving Indian army a license to kill Kashmiris.

He said Pakistan under Prime Minister Imran Khan’s vision, the federal government ensures equal rights for minorities in Pakistan and the government had implemented the court verdict in Asia Bibi case in the same spirit. He said that minorities enjoy equal rights and opportunities under Prime Minister Imran Khan’s governance model and prime minister’s vision is to promote interfaith harmony in the society.

Afridi said that serving humanity is a noble cause and the government is implementing this model religiously. He said that missionary schools have rendered laudable services in Pakistan and he himself had been transformed by missionary schools. “Pakistan has unfortunately been misperceived and a very negative picture has been painted. Pakistan is heterogeneous society and minorities have been a part of us,” he said.

The minister said that Pakistan had been the fastest growing economy in 1960s but the Soviet invasion of Afghanistan derailed Pakistan from the path of becoming the Asian tiger. “In 1960s, Pakistan gave economic aid to Germany. We gave economic model to South Korea and opened a window for China to connect to the world. But it was the Soviet invasion into Afghanistan which derailed Pakistan from the path of economic development,” he said, and added that Pakistan fought a war for the world but the world did not reciprocate Pakistan’s sacrifice.

Peter F Merus said what media reports about Pakistan is not true. “We want to fully register ourselves with religious group. We have some good expertise in rehabilitation and we would love to chip in with our assistance,” he concluded.