A glimpse of Toronto 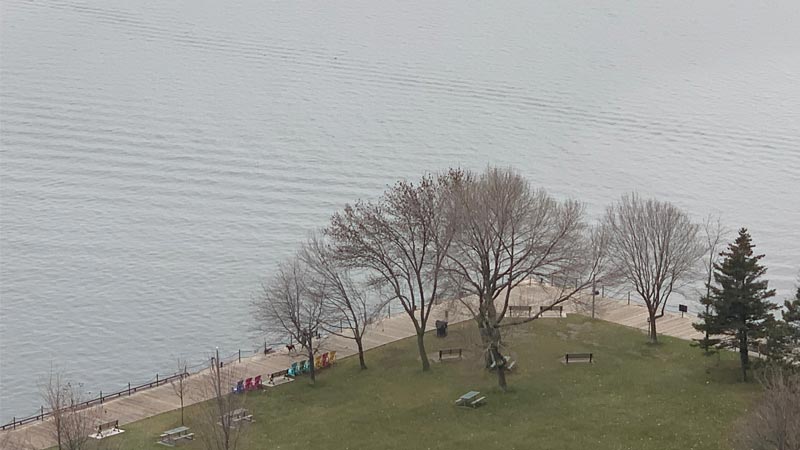 I woke up in the morning and looked out at Lake Ontario from the 22nd floor of my hotel. There was a pink glow on the horizon. I thought at some point it would mutate into sunlight but it never did. It was a typical November day in Toronto.

The previous night’s drive from the Pearson International Airport to the National Club had taken more than an hour. The traffic was heavy and the Sikh driver had begun to lose his patience, swerving around the slower cars in the fast lane, prompting endless honking from the drivers who had been outflanked.

I did not want us to be rear-ended.

So I starting talking to the driver in Urdu. I said I am from Pakistan. Of course he was from India. I asked him about the Kartarpur corridor. The man who had been dour became ebullient and could not stop saying good things about Imran Khan. Now I was feeling the stress.

After the business meetings had ended the next day, it was time to head back to Pearson. But I did not want to fight the traffic. The concierge advised me to take the Union-Pearson express train. It was quite chilly outside but at least no rain was falling. So I ventured outside and within ten minutes was at the station.

Union Station was located next to a giant stadium. I soon discovered it was an endless cavern with thousands of people walking fast in all directions to catch their commuter train.

Different trains had different gates. Arrows kept pointing me towards Union Station. I kept following them but it had become a destination too far.

Finally, afraid I was lost, I asked a woman about the best way to UP. Go left she said and I did. But at some point the signs disappeared. So I asked another person. She said go through that gate. Well, but that will take me to the stadium. She said once you are inside you will see a sign pointing to Union Station. I ventured inside only to see no signs. But kept on going.

My body temperature was rising in the winter clothing and I was regretting not having taken the taxi. Now I was worried I would miss my flight. I had entered a seemingly endless maze not unlike what Alice had entered in “Wonderland.”

Finally, as if by magic, Union Station arrived just when I had begun to think it did not exist. I boarded the train and caught my flight.

This had been my umpteenth trip to that magical city called Toronto which the natives pronounce without the second “t” (it took me several trips to figure that out). It is possibly the most cosmopolitan city in North America where more than a hundred languages are spoken but you can easily get by with just one, English, which has become the lingua franca of the globe.

You can have just about any food you want. American, Canadian (I can’t tell the difference but the locals can), European, Asian, African and Latin American. And if you are into Pakistani food, an excellent place to taste lamb in the best Lahore tradition (and paans in the best Karachi tradition) is on Gerard Street. Munir Pervaiz, my good friend from the Karachi University days, introduced me to that area about fifteen years ago.

Toronto is also a major hub for making connections. On one of my flights to New Brunswick I boarded a turbo-prop. It brought back memories of the F-27 Fokker Friendship I had flown in Pakistan.

The summer weather can be hot and humid with sudden outbursts of thunder and lightning followed by an incessant shower. The freezing winters can make London look like a tropical paradise. Once I had to just walk three blocks from my hotel to the client building in January. My ears froze during the short walk. Anxious to avoid a repetition, I took one of the tunnels on the way back. Several run underneath the city and are populated with shops and eateries. Well, I got lost in the tunnel and Google Maps was no help because there was no WiFi. I had to stop and ask for directions. Of course, the locals know their way around the maze. 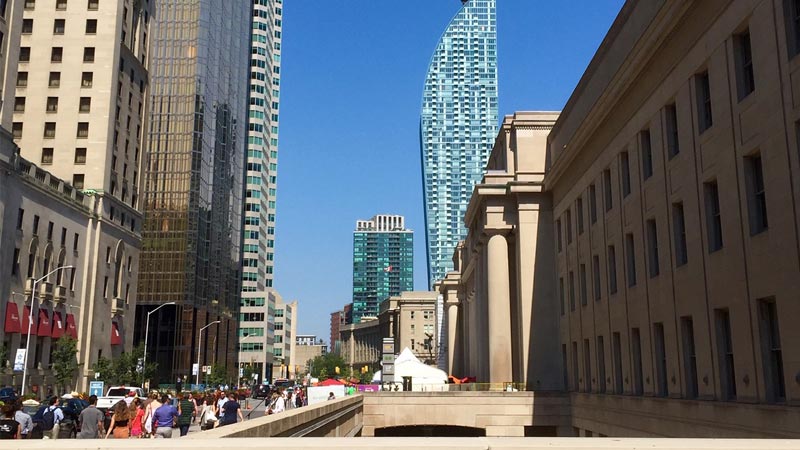 Toronto is one of the fasted growing metropolitan areas in North America. I saw cranes everywhere. During earlier visits, I have had time to walk around town and check out the beautiful campus of the University of Toronto. The Maple Leaf flag flies on most major buildings. The Union Jack which was on the Canadian flag gave way to the maple leaf in 1965. But the Queen remains the head of state and appoints the Governor General as her local representative (even though most Canadians would be hard pressed to tell me her name or what she does).

Despite having removed the Union Jack from the flag, Toronto (and much of Canada with the exception of Quebec) retains a strong British influence. And when I showed up for dinner at the National Club, the first portrait on the wall was that of the Queen.

Trying to get as close to Lahore as I could, I ordered Lamb chops. They were amazing.

In the city, the major attractions include the CN Tower which dominates the skyline, AGO (Art Gallery of Ontario), (Ice) Hockey Hall of Fame, the Royal Ontario Museum, and Ripley’s Aquarium. The town abounds in monuments including a statue of Queen Victoria, the South African War Memorial, the Hungarian Monument, and the Ontario Fire Fighters Memorial.

Niagara Falls is a global tourist attraction and is just a couple of hours away by car. The Maid of the Mist boat takes you very near the falls which lie between Canada and the US.

A nice place to have afternoon tea is the Prince of Wales hotel. The food is served by elegantly attired and incredibly courteous waiters. Even the bathroom sinks are immaculate, sporting images of pheasants embedded in white porcelain. You are treated like visiting Royalty.

When I returned home from the 24 hour visit, I checked up on Union Station and discovered that some 300,000 people visit it daily. It’s not just a transportation hub but also a shopping, dining, and cultural destination. It was opened to the public in August 1927 and is considered one of the finest manifestations of classical Beaux-Arts architecture in Canada.

On my next visit, I will have to check out Union Station as a tourist and not as a panicked traveller.