* Ambassador says if Pakistan was in need, Beijing will never ask Islamabad to repay its loans in time
* Asks where was US in 2013 when Chinese companies were establishing power plants in Pakistan
* No single evidence of corruption in any CPEC project found
* CPEC projects to create around 2.3 million jobs by 2030 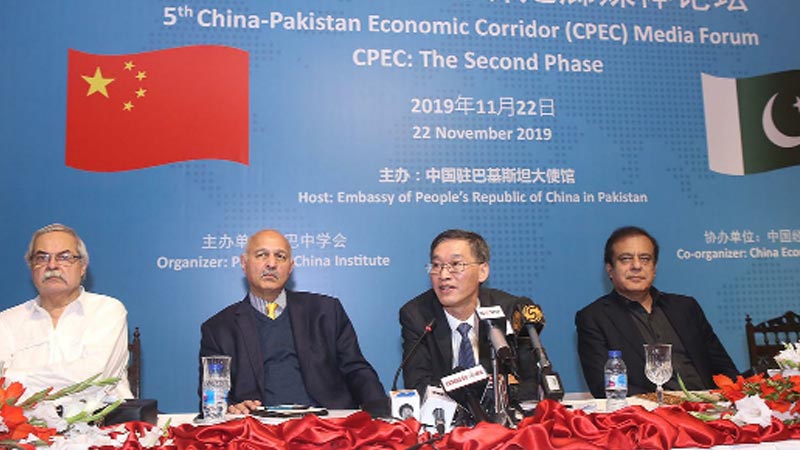 China on Friday rubbished Washington’s ‘warning’ to Islamabad over China-Pakistan Economic Corridor (CPEC), saying relations between the two brotherly countries are based on ‘win-win cooperation’ and are ‘mutually beneficial’.

“China always came forward to assist Pakistan in need without any political or government differences … if Pakistan was in need, China would never ask Pakistan to repay its loans in time, however the International Monetary Fund (IMF), which is mainly governed by the West, is strict in its repayment system,” Chinese Ambassador in Islamabad Yao Jing said, in response to US Acting Assistant Secretary of State for South Asia Alice Wells ‘warning’ Pakistan that the CPEC “is going to take a growing toll on Pakistan economy, especially when the bulk of payments start to come due in the next four to six years.”

The Chinese envoy expressed his astonishment over Wells statement of higher tariff in power plants established under the CPEC, saying that he himself had earlier briefed her about the tariff structure of these power plants and told her that the tariff structure was the lowest among all the countries whom the Chinese companies provide electricity. “When in 2013, the Chinese companies were establishing power plants in Pakistan, where was the US? Why it did not invest in Pakistan’s power sector despite knowing that Pakistan was in dire need of electricity,” the ambassador remarked while addressing the 5th CPEC Media Forum in Islamabad.

Regarding US allegations of corruption in the CPEC projects, the ambassador said it is always easy to pin blames on anyone without evidences. “I myself have discussed this matter with a number of relevant stakeholders … I even spoke to National Accountability Bureau (NAB), but did not find even a single evidence of corruption in any CPEC project,” he said. “The entire process is open and transparent and is in line with the international practice and laws and regulations of Pakistan,” he said. “All the operations of the project are in full compliance with the laws and regulations of Pakistan and can withstand any challenge and investigation,” he observed. “The groundless speculation that M5 motorway involved bidding corruption is totally ridiculous and extremely irresponsible,” he said. “My dear American colleague, before alleging anyone, please be careful that you have enough evidences about the allegations,” he added.

Regarding the Main Line (ML-1) railway project which is to be executed under the CPEC, the Chinese ambassador clarified that the project cost is around $9 billion.

“H owever, this is only estimation and not the final cost. The real cost of the project will be finalised in the second stage of determining financial package of the project,” he said. “As the project has not yet been approved, the amounts of the project will be adjusted according to the actual condition and the needs of Pakistan. After finalising the project, we will initiate bidding process in accordance with the international best practices,” he added.

To the US accusation of providing less employment opportunities to Pakistani workers in CPEC projects, the ambassador said so far over 75,000 Pakistani workers have been provided job opportunities in the projects, with per capita income going up by 23 percent. “By 2030, around 2.3 million jobs are expected to be created through CPEC projects,” he said. “More than 100 small and medium-sized enterprises have participated in the construction of the CPEC, providing hundreds of thousands of jobs.

Among which, the transport infrastructure project Sukkur-Multan Motorway has created about 29,000 local jobs, and a large number of Pakistani technicians have been trained during its construction,” the ambassador said.

“In particular, more and more Pakistani women are finding jobs under CPEC construction projects and participating in social life,” he added.

Regarding the issue of high electricity prices, the ambassador said Pakistan had a serious power shortage before 2014. “In order to reduce power generation cost and solve the power shortage problem, the Pakistani government issued the 2014 upfront tariff policy for imported coal power plant to attract investment in the energy sector. The policy is open and transparent and applies to both local and foreign investors. However, this policy has not attracted foreign investment including that from the United States,” he said. “Facts prove that China provided Pakistani people with cheap and clean energy and has won unanimous support from the people from all walks of life,” he went on to say. “If the United States really cares about the power shortage in Pakistan, why there have been no American companies coming to Pakistan to build power plants before 2014?” he asked. Regarding Alice Wells claiming that China only gave loans to Pakistan, not aid, the ambassador said both countries are all-weather strategic partners who stand together through thick and thin and share weal and woe. “This fully exposes her ignorance of China-Pakistan relations,” he said. “Besides humanitarian aid on a number of occasions, China has built infrastructure projects with grant in Pakistan such as the Karakoram Highway, Pakistan Sports Center, China-Pakistan Friendship Center, Faqeer Primary School, and FATA District School,” he explained.

The ambassador said China is determined to build capacities of Pakistani businessmen and industrialists to boost productivity in the country which will ultimately help in increasing the country’s exports. “Under CPEC, China will provide industrial cooperation to Pakistan and for this purpose over two dozen leading Chinese and Pakistani manufacturers and industrialists are engaged in boosting production and exports of Pakistan,” he said. “I would be happier to see more investment coming from the United States in Pakistan,” he added.

Earlier, speaking at the Woodrow Wilson International Center for Scholars, Wells warned Pakistan that it faces long-term economic damage with little return if China keeps pursuing its giant infrastructure push. She said CPEC will profit only Beijing and said that the United States offers a better model. “It’s clear, or it needs to be clear, that CPEC is not about aid,” she said, and noted that the multibillion-dollar initiative was driven by non-concessionary loans, with Chinese companies sending their own labor and material. “CPEC relies primarily on Chinese workers and supplies, even amid rising unemployment in Pakistan,” she said.

While acknowledging that the United States could not come to Pakistan with offers from state-run companies, Wells said private US investment, coupled with US grants, will improve the troubled economy’s fundamentals. “There is a different model,” she said. “Worldwide we see that US companies bring more than just capital; they bring values, processes and expertise that build the capacities of local economies,” she said, and pointed to interest in Pakistan by US companies including Uber, Exxon Mobil, PepsiCo and Coca-Cola.