What happens when you ask someone who has never been to the subcontinent to suddenly draw the borders between Pakistan and India? Well, what you get is a cesspool of violence and people being silenced for seventy years. When the borders were being drawn up, the British asked Cyril Radcliffe, someone who had never been to the subcontinent, to draw the borders, and naturally, without realising the demographics and the cultural and religious contexts of the area, he hastily divided them into Pakistan and India. 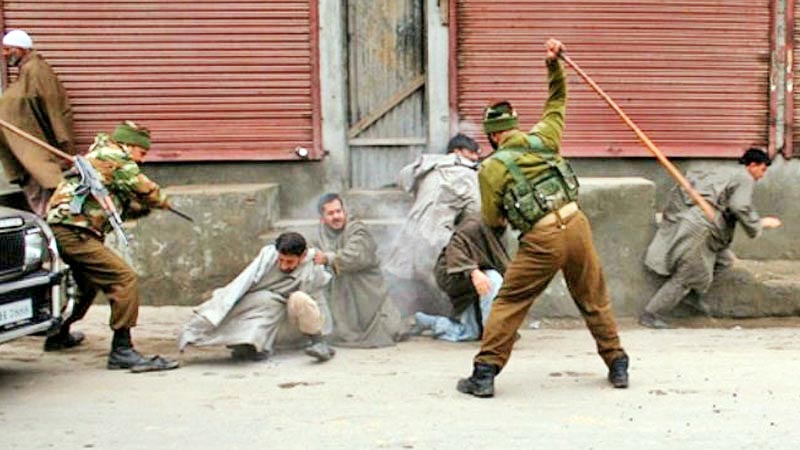 Then there were certain princely states whose monarchs would decide which country they wanted to join. They could choose independence but because of the security provided by a country, it would be better to join one. However, Kashmir was a state that had a Muslim majority population but a Hindu monarch. The monarch chose to stay neutral, fearing he might later join India. The people in Poonch protested in 1947. Armed Pakistani tribesmen joined those people. To quell that protest the monarch asked the Indian military to help him, and said that in return he’d join India. That consequently led to the first Pakistan-India War, which resulted in the United Nations Security Council declaring a ceasefire. The UN asked both forces to withdraw their troops so that a vote could be held as per the will of the people. That vote never happened, and to make matters worse, India wrongfully added Kashmir into its constitution. Kashmiris would then see two more wars, one even resulting in the independence of East Pakistan.

In 1987, India allegedly rigged the elections, and declared a pro-Indian party as the winner. Kashmiris were once more denied their right to vote; naturally, they protested in the thousands and were joined by insurgent groups. That, mournfully, was met with harsh resistance by India as it deployed 500,000 troops and killed 600 people. That hot mess led to the 1999 Kargil war, and another ceasefire was held.

It quickly devolved into terrorist organisations attacking India; in retaliation, India would launch surgical strikes. On February 19, 2019, in Pulwama, a suicide bomber, Adil Ahmed, blew himself up near an Indian convoy, killing forty soldiers; 12 days later, India launched attacks in the northwestern part of Pakistan. Unfortunately for India, the Pakistan army shot down an aircraft, and the pilot was captured. Despite the obvious violation of Pakistani airspace by India, Pakistani forces treated the pilot with respect and returned him safely to India.

The proposition of peace was constantly placed on the table. In spite of all of that, Kashmir has now become one of the most militarised areas of the world. To classify this as retaliation or keeping the peace should be a crime itself. Kashmiris are being compressed between militias, terrorist groups, separatists and the Indian forces.

How does anyone bring himself to shoot an unarmed child with pellets? The Kashmiri people, after facing oppression from the Indian army, started protesting. Peaceful protests were being carried out, and these were met with bullets and pellets raining down on the innocent public. Separatists, civilians, women, children and anyone the Indian soldiers see suddenly become a target. No one ever feels safe now. These pellet wounds are life-long in most cases; there are accounts of people being permanently blinded, getting spinal injuries, knees being capped and a plethora of other injuries. The Indian army has no right calling it collateral; this is a blatant genocide or a ‘politicide’.

What the Indian forces fail to see is the fuel they are adding to the fire. You kill people or harm them, they are filled with rage, and since most of them are easily impressionable teenagers they are influenced by terrorist organisations and end up committing terrorist attacks. Only stopping the morally reprehensible violence in the region can break this cycle. Take a look at the suicide bomber, Adil Ahmed; he was a teenager who was humiliated by the Indian army. He was shot in the leg, and then stomped on; being an impressionable teen he was easily radicalised. If only he was given rations and a pen, maybe those forty people and Adil himself would be alive right now.

The situation was made drastically worse when the Hindu nationalist government revoked Article 370, which afforded Kashmir substantial autonomy over its affairs. But this revocation has removed the near-autonomous powers of Kashmir. India hoped to unify Kashmir under the centre so that it could stop the separatists. With the removal of Article 370, Indian citizens can now buy property in Jammu and Kashmir. It is a gross violation of international law. And as quoted by Imran Khan, “This is a war no one can win.”

The Indian government propagated the idea that the situation in Kashmir was under control, while in reality families couldn’t even reach their loved ones

It is made slightly ironic when even the Indian opposition is so fervently against it. There is a reason for calling it politicide when the Indian army is killing or nearly killing the Kashmiri people and then allowing its citizens to settle there; it would lead to the demographics being immensely skewered. Eventually, when the referendum happens the demographics would have been jeopardised to an extent where the vote might go to India’s favour. All of this has culminated into more protests and separatist movements.

To combat that the Indian government started a crackdown in Kashmir, a crackdown that has continued for three months. Eight million Kashmiris were cut off from the world in a communication blackout; the Indian government propagated the idea that the situation in Kashmir was under control, while in reality families couldn’t even reach their loved ones. Road blockages, government offices closed and activists being arrested were some of the few common sights there. Parents couldn’t take their children to hospitals, couldn’t contact their families outside of Kashmir and couldn’t speak up against the oppression. Freedom of speech (arrested if anything said against the army), freedom of movement (blockades), dignity of man (torture and searching of houses), right to equality, and right to life (Indian army were given the licence to shoot) all seem like fairly unachievable terms there. I say right to equality since being a Kashmiri carries this inherent discriminatory lifestyle; you’ll be shot, maimed, arrested just for being a Kashmiri. That doesn’t sound like equality to me.

On observation, it seems that the masses are now even indifferent to the oppression. The protestors are only becoming more vocal, pro-Pakistani chants or pro-independence chants are being uttered, and people are willing to take up arms against the oppressors.

However, no one wants a civil revolt. A peaceful solution is there, and if only India is willing to accept Imran Khan’s proposal of peace talks. Will we ever see a Kashmir free of violence? The main stakeholders for the past seventy years have been the Kashmiri people; they have suffered enough. They have lost enough youthful zeal, they have seen enough militias and soldiers, and they have seen enough ‘attempts’ to achieve peace. Genocide and politicide are international crimes, and under the responsibility to protect and UN human rights law, every peace-loving country should come to Kashmir’s aid. Imran Khan even tweeted to US President Donald Trump to mediate Kashmir talks. We see a clear effort by Pakistan to reach a solution, but India’s intransigence may cost the Kashmiris their identity. Instead of silencing children with pellets and then hushing their voices, India should try to start a dialogue.