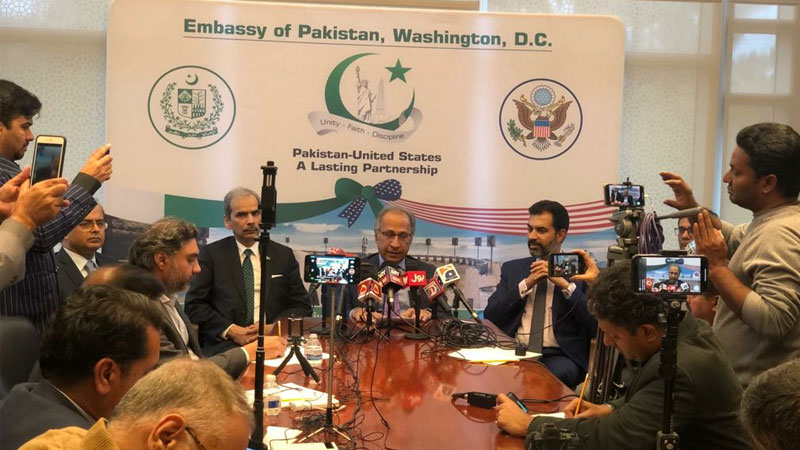 Pakistan’s economy is on the path to stabilization, said Adviser to Prime Minister Imran Khan on Finance Dr Abdul Hafeez Shaikh while speaking to press on Sunday at the Pakistan Embassy in Washington DC.

Shaikh said the purpose of the visit was to “improve bilateral relations, develop relations with the international business community.” He said the visit was also necessary to assure the US institutions of Pakistan’s efforts and the progress made in Pakistan’s economic development.

They also met with the Managing Directors of the IMF and World Bank to apprise them of Pakistan’s progress following the implementation of the IMF advised economic and institutional structural reforms. The team also met with delegates from the Islamic State Bank, Asian Development Bank, and the US Chambers of Commerce.

Speaking on Pakistan’s economy Sheikh said, “the results for the first quarter of the financial year indicate that Pakistan’s economy is on the path to stabilisation.” He highlighted that there had been a sharp decline in the current account deficit and an increase in Foreign Direct Investment. FDI in the country increased from $182 million in September 2018, to $380 million in September 2019.

Sheikh stressed that Pakistan’s exchange rate will now be market-based, despite being artificially inflated in the past. In order to salvage Pakistan’s foreign exchange, he said, “we have increased the tariffs on luxury import items.”

He explained Pakistan Prime Minister, Imran Khan, inherited a poor economy from the previous administrations, thus much of the new administrations time has been spent repairing and strengthening the economy. “We have decreased government expenditures and increased the tax net from 1.9million to 2.8 million,” he said. “We have repaid already repaid millions of rupees from the previous governments debt.

He added, to increase export incentives “the government plans to reduce the price of gas and electric for the export sector,” he said. The government would also try to increase non tax revenue estimated to be R1.3 million.

Speaking on the recent decision by the Financial Action Task Force (FATF) to retain Pakistan on the grey list with a stern warning: that Pakistan will be blacklisted if it fails to control terror funding by February 2020. Sheikh said, “Pakistan endeavoured to meet all the FATF requirements and was optimistic during the next FATF assessment they would be removed from the grey list.”

Speaking on the government’s initiatives to help those from the lower socio-economic strata: “We have reduced the bulk of debt from the those who use a reduced amount of electric.” He said,” we have also increased the subsidies of the poor people to $192 billion rupees. At present people who use less than 300 units of electricity they will not be paying the premium electricity price.” The government is also “giving health care support to the poor” he said.

He said a delegation from the IMF will visit Pakistan on October 27, 2019, to review the progress of structural improvements and privatization. The IMF accountability and transparency process will include the review of: government spending and receipts. Based on their findings the mission will estimate and conclude independent percentages of Pakistan’s economy.