A memoir of New Orleans 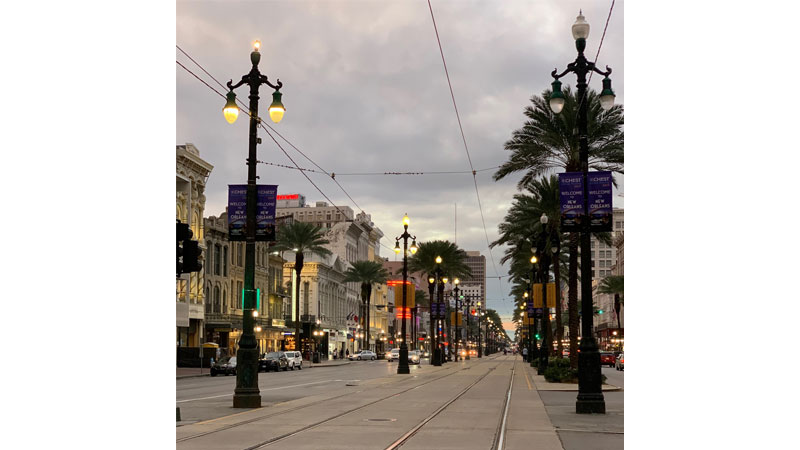 Two years ago, I arrived in New Orleans on an evening flight, fully prepared to do some work once I got to my hotel.

But it not meant to be. It was the first night of Mardi Gras, that late winter carnival which according to one guidebook is “famed for raucous costumed parades and street parties.” Thousands of people descend into town for that event alone, drawn from all over the US.

I was informed by my taxi driver that all the major roads to my hotel were cordoned off. He was going to drop me off a few blocks away. “It will just take you a few minutes to get to your hotel.” After getting paid for the fare and the trip, he drove off, leaving me standing on the sidewalk with my bags. A light rain had begun to fall so I reached inside for my portable umbrella and began to negotiate my way through the crowds dragging my bags on wheels.

I must have looked totally out of place among the partygoers. An hour later, I was still navigating my way through the crowds. I ended up taking shelter in the lobby of the hotel across the street from mine.

For years, I had seen Mardi Gras on TV but this was my first live encounter. Dancers in florid clothing, mounted on garishly decorated floats, were moving slowly past the crowds who were chanting and yelling in rhythm. Music hung in the air. It was an encounter to remember. By the time I arrived at my hotel, I was dead tired and just dropped on the bed.

My first visit to New Orleans had taken place in 1984 when the World’s Fair was being held there.

After the day’s business had been attended to, I decided to ride across the Mississippi river in the cars that were traveling on the high cables that had been strung hundreds of feet across the river.

The car seemed to be swaying in the wind, giving it the opposite of a lullaby sensation, activing my vertigo reflex. And then fireworks began to burst in the air, each one closer than the prior one. I did not want to take a cable car back to town but there was little choice.

New Orleans, which is called The Big Easy for reasons unknown, has a well-deserved reputation as being the Jazz capital of America. An internationally renowned Jazz Fest is held in the spring and draws huge crowds.

It’s also a heaven for foodies who get to choose from more than 1,400 restaurants. There is something for every taste. Of course, the favorite is local Cajun cuisine. Fish and shell fish of every kind can be savored -grilled, barbequed or fried -and then there are the Po-Boy sandwiches featuring oysters.

The city has an interesting history involving the French, the Spanish and the British, which explains why some speak a Creole dialect.

The French Quarter, founded in 1781, is considered the crown jewel. It is known for its Bohemian charm, Steamboat cruises, old world architecture, music and food.

On my most recent visit, I decided to walk along Canal Street which is lined with big hotels and many funky storefronts. Then I made a right turn onto Royal Street which is lined with art galleries and restaurants. It is also the place from which to admire French Quarter architecture, much of which is actually Spanish since fires in the latter half of the 18th century destroyed most French buildings. At every street corner there were street artisans, street poets and performers. At some point I went past the stately Supreme Court building.

I must have looked totally out of place among the partygoers. An hour later, I was still navigating my way through the crowds. I ended up taking shelter in the lobby of the hotel across the street from mine

Nearby was Bourbon Street which, contrary to popular belief is not named after the libation poured in its many bars but after the French royal family of the time. Over time the street scene has changed from tony supper clubs to tawdry strip clubs, but music has remained a mainstay. Hip-hop, hard rock and jazz exist in perfect harmony.

Then I found my way to the imposing edifice of the St. Louis Cathedral. A street play was being enacted right near its entrance. A large crowd was about to witness an acrobatic performance. Cameras were mounted on tripods and were clicking away.

Just across the cathedral was Jackson Square. During the final campaign of the War of 1812 the British had sent a force of some 11,000 to capture the city. General Andrew Jackson (later US president) managed to decisively defeat the British forces on January 8, 2015. His victory is commemorated in that square.

Then I walked over an overpass and found myself taking in a magnificent view of the Mississippi river. It was as wide and as expansive as any river I had seen, including the Indus before the Sukkur Barrage.

Along the river walk was docked the steamboat Natchez, known for providing live Jazz on all cruises. Docked further down was a huge cruise ship. Perhaps it was going to take people to on a Caribbean cruise. Or maybe it was going to take them all the way up the Mississippi past the city of St Louis in Missouri to Minneapolis in Minnesota. Further to the right was a long bridge that took you to the city of Algiers.

I returned to the French Quarter and went past Café Beignet. It offers incredible “breakfast” food until 10 pm at four locations in town but I had already had my meals on the flight. A three-some was playing amazingly melodious Jazz music and I stopped to listen. Beignets, a staple of New Orleans, are a French doughnut without a hole.

I had an early dinner at the Kingfish restaurant. I decided to try Mexican tacos with a local fish. It lived up to the four stars on Yelp. Elsewhere in town is the WW II museum, known as the Arsenal of Democracy. It’s regarded as one of the best in the US and covers both the Asian and European theaters of war. Not too far away from the city are some amazing plantations with their Southern mansions and swamps. But I had run out of time. These would have to wait for a future visit.