* Before we jump on to this shrine, fort and temple in Bhumman Shah, let me tell you who actually Bhumman Shah was and how much he is revered among the Sikhs 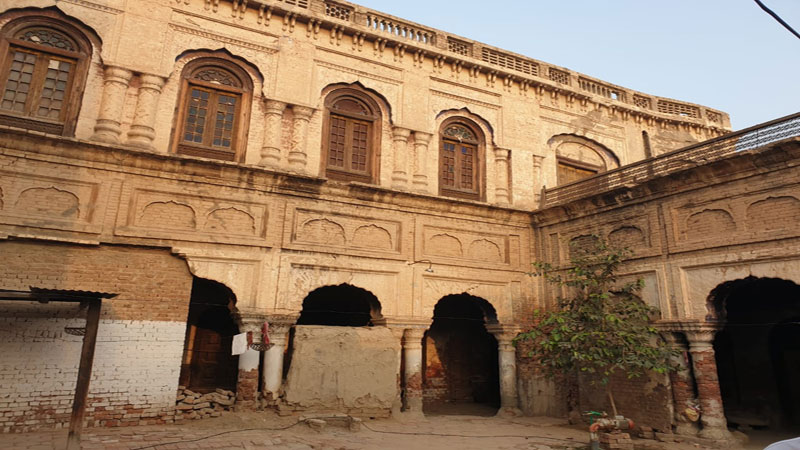 Let me take you to a marvel hidden in Pakistan as I am sure that many of you must be unaware of this masterpiece of the Sikh Era. Almost 18 kilometres from Depalpur and located on the Haveli Lakha road is the village called Bhumman Shah. According to myths it is said that Bhumman Shah was blessed that his langar (free food) would continue forever, and so it does. This place is not much far away from Lahore, and you can make a one day trip to this place.

Before we jump on to this shrine, fort and temple in Bhumman Shah, let me tell you who actually Bhumman Shah was and how much he is revered among the Sikhs. Baba Bhumman Shah is listed among the top Udasi saints of India. Udasi is a religious sect of ascetic Sadhus living in northern India and this sect is based on the teachings of Sri Chand the son of Guru Nanak who was the founder of Sikhism and was the first Sikh Guru.

It is said that Baba Bhumman Shah was born on April 14, 1687 CE at Behlolpur village, Punjab in Pakistan. According to Sikh history it is said that his father Chaudhury Hassa Ram was a Numbardar and a well-known landlord of Behlolpur. Hassa Ram and his wife Mata Rajo Bai were known to be deeply religious and devotees of Guru Nanak as well as of Baba Sri Chand.

While reading about Baba Bhumman Shah you will come across several interesting myths about him, relating to his childhood and some miracles. It is said according to a myth that once he was sleeping in his cradle and a cobra snake was found sitting on his chest. Bhumman Shah’s mother was frightened and shocked to see a huge cobra on her son’s chest but as soon as she tried to get close to the cradle the cobra disappeared. There is another interesting myth which reveals the miracles made by Baba Bhumman Shah and says that he made the dead sparrows alive and also restored the lost crops of a poor farmer. After these miracles made by Baba Bhumman Shah, he got popular among the people and there was always a crowd outside his house to see him or have his Darshan. According to historic references, Bhumman Shah went to school at the age of seven and was a sharp and intelligent student. He had absorbed the essentials of Hinduism, Sikhism and Islam at a very young age and that is why he was respected and honored by the people around. At a very young age when Bhumman used to take his cows for gazing, he would take along a lot of food and water for the passer bys and that became his langar (free food).

By the time Baba Bhumman’s family moved from Behlolpur to Deepalpur he was around fifteen and had a strong desire to become a monk. His parents supported his wish and thus Bhumman met with Baba Pritam Das of Pakpattan who was a prominent Saint of Udasin Panth.

On being formally initiated and baptized by Baba Pritam Dass, Bhumman himself became Baba Bhumman Shah. Soon he started preaching religious messages which were always accompanied by langar.

There is an interesting incident. It is stated that Chaudhury Lakha Wattu, a Muslim Rajput landlord of village Kutub Kot had been arrested for some reasons and was put behind the bars at Lahore by the orders of the then Governor of Punjab. Lakha’s mother, was a staunch devotee of Baba Bhumman Shah. She asked for his blessings so that her son could be released, and thus Lakha was soon released. Chaudhury Lakha was released from the jail within couple of days and as a result, Lakha and his numerous Muslim relatives from the Wattu tribe became devoted followers of the Baba Bhumman Shah. In addition, the tribe also surrendered a village named Kutub-Kot to the Baba which the latter made the centre of his religious activities.

Baba Bhumman Shah also visited the Dargah of Sufi Saint Baba Farid, Golden Temple at Amritsar, and numerous other Sikh and Hindu shrines during his religious itineraries. It is said that Bhumman Shah was also a very dedicated Sikh of Guru Gobind Singh. It is told that once, Dashmesh Guru and his Sikh followers were going to Nili Bar when they visited Baba Bhumman Shah and took Langar at the Dera; pleased with Shah’s noble mission, Gobind Singh blessed him that his Langar would continue to grow with no shortage of any kind.

After carrying out his religious mission for well over 50 years, Baba died in 1762 CE. He was succeeded by Mahant Nirmal Chand who continued his work. In Pakistan, this Dera was considered the richest with huge property attached to it in pre-partition times.

The spiritual and pragmatic teachings of Baba Bhuman Shah have been presented in the form of aphorisms in a booklet by his ardent devotee, Sage Chandra Swami, with a focus on true goal of life as well as the right means for its achievement. These teachings are in complete concordance with Baba’s own divine life. In Dipalpur this shrine is built in the style of a huge fort and inside this giant fort-like structure the Gurdwara of Baba Sri Chand, residence of Baba Bhuman Shah, the Samadh of various Mahants are located along with hundreds of rooms for visitors, langar khana and the tank.

There are four big gates to enter this shrine and the walls are decorated with colourful pictures and the sayings of Gurus. At present this building is under the possession of the Evacuee Waqf Board. At present the building really needs conservation and restoration because with the passage of time it has dilapidated. The building reflects a typical Sikh architecture and you will be able to see intricate fresco in this building.

You can see a majestic building in this complex with domes and intricate brick work. The entrance of the place is also delicately designed and you will see motifs made with bricks. Several rooms have still the remains of fresco work. These frescos depict the stories of past and floral designs. You will see similar Sikh structures here in Lahore too.

Within the same complex you can see the Darbar of Baba Shri Chand Ji which displays its splendour and is a double storey building with a Beautiful Diwan hall. Inside the hall the domed Prakashasthan is captivating. The walls are decorated with beautiful frescoes depicting peacocks, birds, tigers, elephants, sarangis and tablas. Rhymes from Guru Granth Sahib are also inscribed at different places. This darbar was built by Mahant Harbhajan Das in Samvat 1967 (1910 AD).

The entire complex is a masterpiece and I’m hoping that soon it’ll be revived and turned into a tourist spot as well.

The writer can be reached at taniashahab2016@gmail.com. She Tweet at @TaniaQureshi