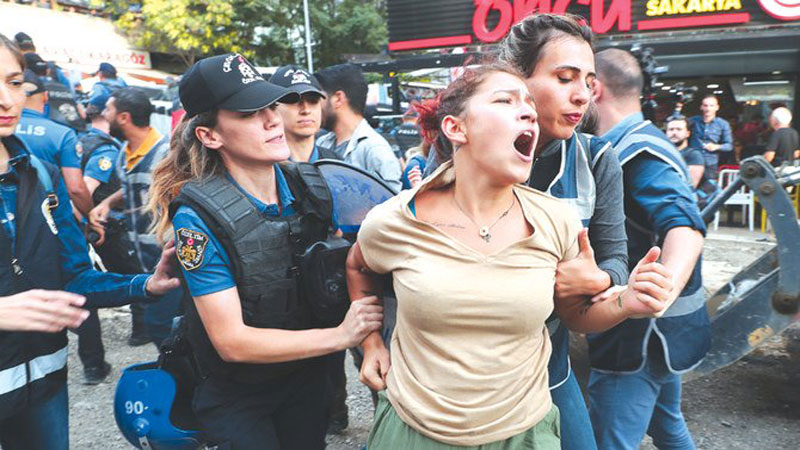 Turkey replaced the mayors of a Kurdish-majority town in its southeast with a state official, the pro-Kurdish Peoples’ Democratic Party (HDP) said, amid a crackdown at home on criticism of Ankara’s offensive in Syria.

The HDP said five of its co-mayors in the southeastern Kurdish-majority towns of Hakkari, Yuksekova and Nusaybin, had been jailed on Thursday, pending trial.

Two other co-mayors in the district of Ercis were detained earlier this week and remain in custody, it said.

Turkey has launched a crackdown against dissent in its majority Kurdish areas following its assault against Kurdish-controlled parts of neighboring Syria.

Protests have been broken up with tear gas and scores of people have been arrested for criticizing the military campaign online.

The HDP governs many cities in the mainly Kurdish southeast of Turkey. It typically appoints one male and one female co-mayor to promote gender equality.

Semire Nergiz and Ferhat Kut, co-mayors of Nusaybin, were accused of being members of a terrorist organization and replaced by a state-apppointed trustee on Friday, the HDP said.

Yuksekova co-mayors Remziye Yasar and Irfan Sari were jailed for their interviews, columns and social media posts. It was not immediately clear what the Hakkari Mayor Cihan Kahraman was accused of.

The state-owned Anadolu news agency said on Friday local administrators had been appointed to replace mayors in Yuksekova and Hakkari.

Nusaybin is a town on the Syrian border in the southeastern Mardin province, while Hakkari and Yuksekova are situated on the border with Iran.

Nusaybin has been the target of cross-border attacks during the operation, with a mortar and rocket attack by Kurdish militants last week killing eight people and wounding 35 others.

Friday’s moves came just hours after Turkey agreed with the US to pause its offensive in Syria for five days to allow Kurdish forces to withdraw from a planned “safe zone” in Syria’s northeast.

While most of Turkey’s opposition parties have backed the offensive against the Syrian Kurdish YPG militia, the HDP has called for it to stop, describing it as an “invasion attempt.”

HDP says the operation was an attempt by the government to drum up support amid declining public backing.

The former co-leaders of the pro-Kurdish HDP have both been jailed since 2016 on terrorism charges, with several other prominent members accused of supporting terrorism over what the government says are links to the banned PKK insurgent movement. The HDP denies supporting the PKK.

The Kurdish-led administration in the area said Turkish truce violations in Ras Al-Ain had caused casualties, without giving details. Reuters journalists at the border heard machine-gun fire and shelling and saw smoke rising from the Syrian border battlefield city of Ras Al-Ain.