Federal government has decided to “engage with Fazlur Rehman” and other opposition members for the purpose of negations in connection with the upcoming Jamiat Ulema-e-Islam-F (JUI-F) sit-in.

A team has been formed under Defense Minister Pervez Khattak in this regard. Government has announced to hold local body elections in the start of next year in Punjab and Khyber Pakhtunkhwa.

These decisions were taken in PTI core committee meeting on Wednesday. Prime Minister Imran Khan presided over the meeting.

According to sources, the committee headed by Defense Minister Pervaiz Khattak will hold dialogues with Maulana Fazlur Rehman, PML N, Peoples Party, Awami National Party and other political parties and will listen their demands that will be presented to Prime Minister Imran Khan later.

Sources further told that PTI will tackle JUI-F Azadi March in political way and talks were part of the strategy but no demands will be accepted of resignation of Prime Minister Imran Khan. 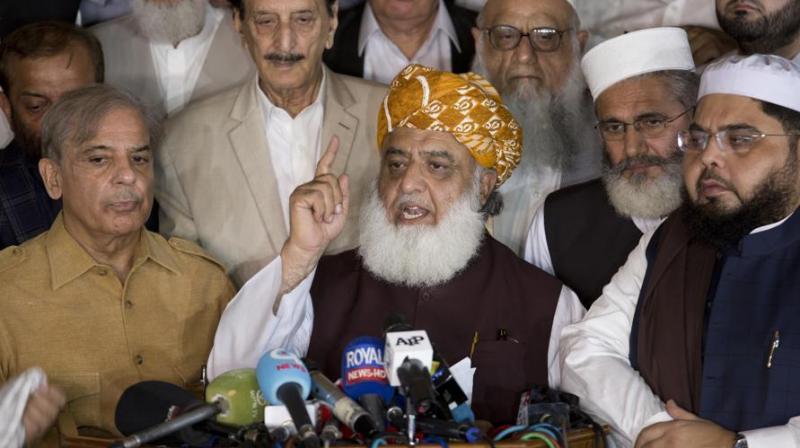 During the meeting, matters pertaining to country’s political, economic situation and rising inflation came under discussion.

The prime minister took the participants in confidence over his recent visits to Saudi Arabia, Iran and China.

The meeting also discussed matters relating to dissolution of party’s provincial bodies and task of Re organization of the party had been given to Amir Kyani, the secretary general of PTI.

On the other hand, Interior, Minister Ijaz Shah briefed the prime minister on the security measures Islamabad administration had taken to tackle the Azadi March and security of red zone. He told that all law enforcement agencies had been put on alert to maintain the law and order situation while provincial chief ministers of Punjab and KPK also told the participants about the security arrangements during azadi March and their strategy to maintain law and order situation in their provinces.

Sources said that prime minister made it clear again that he will not compromise the corrupt mafia at all he was ready to talks on genuine demands but no one could black mailed him. He said country was on the path of progress and we were trying to mitigate the economic challenges and for this political stability was need of the hour.

FM Qureshi said that the other consideration is that Pakistan has just surmounted a great economic challenge over the past 13 months and brought Pakistan back to stability.

“When our government took over the helm of affairs, all the macroeconomic indicators were painting a very dire picture, whether it is the fiscal deficit, the current account deficit, the trade deficit, the investment levels, the unemployment figures, exports, imports, or debt servicing capabilities.

“So just now we have begun to witness an economic turnaround, and at this time if there is even a hint of instability, it will adversely affect our economy,” explained the foreign minister.

He said that keeping the aforementioned factors in view, the government had decided in favour of political engagement. “Let’s see what response we get.”