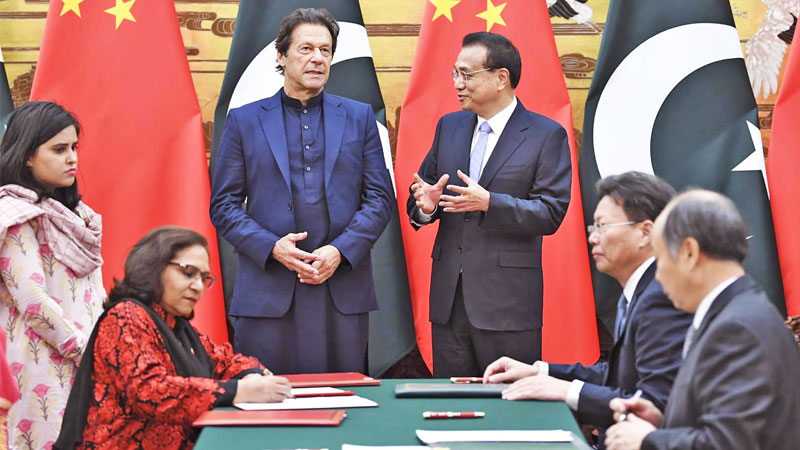 During the meeting, both the leaders agreed that the implementation of the second phase of China-Pakistan Free Trade Agreement (FTA) will lead to more trade, economic and investment opportunities between the two countries. Other areas of potential collaboration discussed in the meeting included railways, steel, oil and gas, industry and science and technology.

Prime Minister Imran Khan, who is on a two-day official visit of China, was presented a guard of honour, accompanied by a 19-gun salute, on his arrival at the Great Hall.

Extending felicitations on the 70th anniversary of the founding of the People’s Republic of China, the prime minister underscored that the all-weather strategic cooperative partnership between Pakistan and China served the fundamental interests of the two countries and peoples, and contributed to peace, development and stability in the region. He emphasized that expeditious completion of China-Pakistan Economic Corridor (CPEC) projects is the foremost priority of his government as the transformational project is pivotal to accelerating Pakistan’s economic development and regional prosperity. Premier Li was apprised of the actions undertaken recently to fast-track CPEC projects and to push the development momentum in Gwadar. Premier Li underlined the salience of the abiding Pakistan-China relationship and reiterated China’s support for Pakistan’s issues of core national interest. He thanked Prime Minister Imran for the measures to advance the CPEC projects and maintained that the second phase of CPEC will be instrumental in reinforcing and consolidating Pakistan’s economic development and pave the way for enhanced Chinese investments in Pakistan.

The two sides also discussed regional security situation, including serious human rights and humanitarian situation in Indian-held Kashmir. Prime Minister Imran Khan apprised Premier Li of the latest developments and the importance of urgent action by the international community to alleviate the sufferings of the Kashmiri people in the lockdown. Both the leaders maintained that frequent and substantive bilateral exchanges are contributing to elevating the all-weather strategic co-operative partnership to new heights and are reinforcing people-to-people ties. The two leaders also witnessed signing of various agreements and memorandums of understanding (MOUs) aimed at deepening Pakistan-China ties in a range of socio-economic sectors.

Prime Minister Imran Khan reiterated his invitation to Premier Li to visit Pakistan at the earliest opportunity. Foreign minister, minister for planning, development and reform, minister for railways, advisor on commerce, special assistant to prime minister on energy, and Board of Investment chairman, chief of army staff, Inter-Services Intelligence Director General and other senior officials were present.

Earlier, Prime Minister Imran Khan arrived here on a two-day official visit at the invitation of his Chinese counterpart.