All eyes were on Imran Khan for his maiden speech on the forum of the United Nations General Assembly (UNGA), held on September 27. Khan, no doubt, displayed his charisma through his fearless and sure-footed speech before the world leaders. His facial expressions and body language produced shockwaves of anxiety for our foes sitting there; this calculated kick was enough for everyone looking at Pakistan witha bad intention. His extempore speech, based on well-researched data and arguments, helped him to get to the list of charismatic leaders who have foresight. 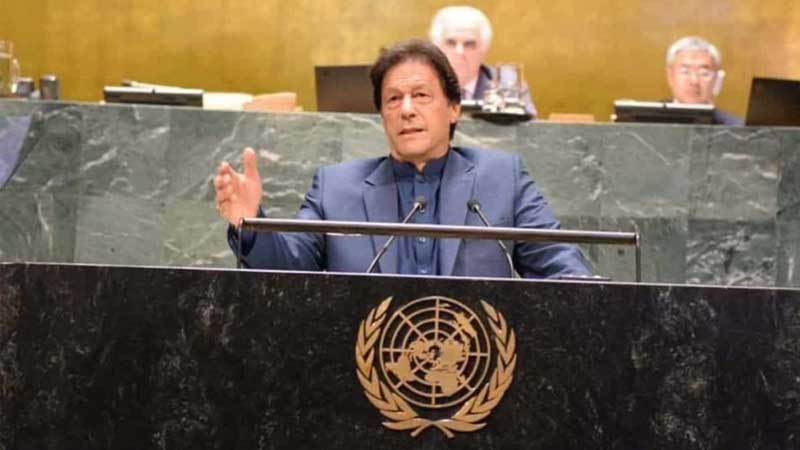 The speech was divided into four sections, highlighting the problems that are confronted by the world today. The issues Khan spoke about were climate change, corruption and money laundering, Islamophobia and the Kashmir conundrum.

Imran Khan also highlighted the need to contain and halt the vicious practices of corruption and money laundering. He exemplified this argument by quoting Pakistan. He said that the leadership in Pakistan, when at the helm of affairs, looted and siphoned off the public money, and sent it to mostly European countries in the form of offshore companies. This practice enhances the gap between the poor and the rich and becomes a stumbling block in the way of progress and development among the third world and developing countries. Therefore, Prime Minister Khan urged the world leaders to ensure sustainable endeavours to end this venal practice.

Very importantly, Khan clarified the fallacy of the concept of ‘Islamophobia’. He deftly presented the case of Islam and its true preachers and followers. Khan is of the view that the term ‘Islamic terrorism’ is based on the false notion that Islam teaches extremism and fundamentalism. He further elaborated that if a Muslim around the globe commits a vicious act, it has nothing to do with the religion of Islam. On the other hand, Islam is a religion of peace, tolerance, pacifism and equality. Prophet Mohammad (PBUH) is the practical example of Allah’s phenomenal teachings.

Khan pointed out that terrorist and extremist acts carried out in India, Sri Lanka and other parts of the world do not imply that Hinduism or any other religion teaches such nefarious acts. No religion favours an act that creates human miseries and pain. An act of an individual must not be linked with his respective religion. There should be respect for others’ religion, which is imperative for peaceful co-existence. Severity of Islamophobia can be gauged around the globe; a woman is allowed to take off her clothes but is not allowed to wear a hijab (veil) because she can be a threat to the security of that country. Our respected prime minister said that around 1.5 billion Muslims in the world are preaching their religion, which is peaceful in nature, and should not be labelled with any derogatory remarks. He urged the world to refrain from disrespecting Islam.

Lastly, the prime minister also elaborated the current issues between Pakistan and India. He said that since the PTI government came into power, they have, time and again, extended the olive branch to India, but India, theso-called flag bearer of democracy, has put pacifism on the backburner. Despite India’s nefarious and proven acts of terrorism in Karachi and Balochistan-he gave the example of Kulbhushan Jadhav-Pakistan has always tried to start a dialogue with India.

However, the revocation of Article 370 and 35A by India’s ‘Hitler’ Narendra Modi is the last nail in the coffin of Pakistan’s patience and tolerance. Now is the time for the UN to intervene in this matter and try to resolve the Kashmir issue in accordance with the aspiration of the Kashmiri people. So far the UNSC has passed nine resolutions to hold a plebiscite in Kashmir. If the UN fail to resolve the issues between the two nuclear states, and India continues her fascist tactics, Pakistan would be left with no other option but to retaliate. The PM intimated the world community that Modi and RSS are taking this issue to a point of no return. Do something tangible before it is too late.

The writer is a columnist, historian and an international political and security analyst