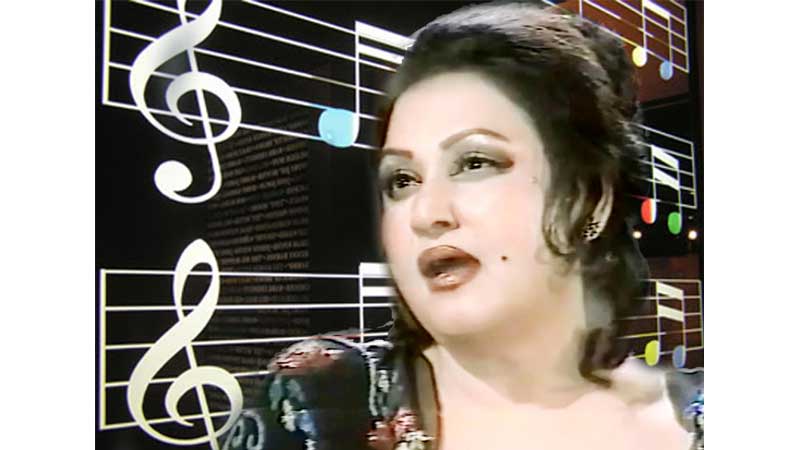 When I am asked to name some of the best songs sung by the legendary Noor Jahan throughout her singing career, I am at a loss to name all sung in pre-Partitioned India or in Pakistan.

Even her last song ‘Ki Dum Da Bharosa Yaar’ from the film ‘Sakhi Baadshaah’ was not only tuneful but full of pathos despite the fact that she was ill at the time of rendering this song. The reason was simple; her God gifted voice quality, her full throat singing and command over classical music; a trait she learnt from her childhood to her death teacher Ghulam Muhammad who accompanied her where ever she went. Many would argue that her best song is ‘Mujh Sei Pehli Si Muhabbat’ from Rasheed Attre’s film ‘Qaidi’ but being best and being popular are two different things. Like many of that generation who were born around late 1940s or early 1950s grew up with Nurjehan’s songs whose style was imbedded on all the psyche of upcoming singers of that era. Even Lata Mageshkar was taken out of that mould by the efforts of music directors Anil Biswas and Naushad Ali in Lata’s inception days.

“BADNAM MUHABBAT KAUN KARE?” — music director Sajjad Husain got his major break in the year 1944 with the film ‘Dost’ starring Noor Jahan and Motilal. Nurjehan sang some unforgettable songs- ‘Badnaam Muhabbat Kaun Karey’, ‘Ab Kaun Hei Mera’ and ‘Koyee Prem Ka De Key Sandesa’ and the film till date is remembered because of such musical super hits. If one has listened to these captivating melodies, one must have observed the beauty of delivery of word ‘Badnaam’ and a charismatic pause thereafter, besides, expression of thought and an extra-ordinary quality of sur (note). It was somewhat classic!Nurjehan stay in India before the creation of Pakistan was a mix of successes and failures but she sang 127 songs in Indian films and the number of talking films she made from 1932 to 1947 was 69. The number of silent movies was 12. Fifty-five of her films were made in Bombay, eight in Calcutta, five in Lahore and one in Rangoon (now Yangon), Burma (now Myanmar).

“CHAND HANSE DUNIYA BASE” — film ‘Intizar’ was released on May 12, 1956. The dialogues were written by Syed Imtiaz Ali Taj and the film had Noor Jahan and Santosh Kumar in the lead. Asha Posle played a negative character. This film proved Khawaja Khurshid Anwar’s mastery over the use of classical raags in filmy songs. This film had hit songs such as “Jis Din Se Piya Dil Le Gayey”, “Aa Gaye Balam Pardesi”, “Chand Hanse Duniya Basei”, “O! Jaaney Waley Re Thehro Zara Ruk Jaao, Laut Aao”, “Ghazab Kiya Terey Wa’adey Peh Aitibar Kiya, Aa Bhi Jaa”, “Sawan Ki Ghanghore Ghataao” and “Chun Chun Naachun Gi Gun Gun Gaaoun Gi”. I like ‘Chand Hanse’ best out of this lot because it was Nurjehan’s first song with Khwaja Saheb and because of expressions of gloom in Nurjehan’s rendering and because Raag Malti was used in its composition at its best.

“JIA RA TARSE” — music composer Rasheed Attre and Nurjehan combination has added dozens of jewels in the necklace of music’ Nurjehan’s first film playback song after she decided to go for this trait was also Rasheed Attre’s composition ‘Zindigi Hei Ya Kisi Ka Intizar’ in the film ‘Salma’ filmed on the then new comer Bahar. In my book Melody Singers 1, I have mentioned that this song was a melodious medium tempo Pop song of its time. Instead of charging 200 to 500 rupees per song as charged by Zubeda Khanum, Kauser Parveen, Munawar Sultana etc., the playback singers of that time, her rate was a couple of thousand, quite high for 1960s. Nurjehan’s preference used to be singing for heroines only and not for side heroines or for vamps.1968 film Mahal’s song ‘Jia Ra Tarse Daikhan Ko’ was filmed on Zeba outside Mauhammad Ali’s Mahal.

Film ‘Intizar’ was released on May 12, 1956. The dialogues were written by Syed Imtiaz Ali Taj and the film had Noor Jahan and Santosh Kumar in the lead. Asha Posle played a negative character. This film proved Khawaja Khurshid Anwar’s mastery over the use of classical raags in filmy songs

It is a very heartfelt and soul extracting song. Unprecedented words with beautiful composing and melodious vocal impressions by Nurjehan are seen in this song. A fan Zil Hasnain Kazmi says ‘centuries will pass before another voice of her calibre, elocution, style and expressive emphasis on the emotional aspects of the lyrics will be gifted to this planet again, she can naturally justify the poetic lyrics and i think the poets created these inspired by her voice as they could imagine her immortalizing their creations just as the composers did, there is no match for this lady and she can perform anything – eternal’.

SAGAR ROYE LEHRAIN SHOR MACHAEIN — regarding 1958 film ‘Koyal’ I observed in my book Melody Singers 1,that Nurjehan remembers the song ‘Sagar Roye Leherain Shor Machaein’ because Khwaja Saheb’s jump from a lower note to a higher one on the word ‘Machaen’; a difficult proposition from vocalization point of view. The other songs such as ‘Dil Ka Diya Jalaya’ in Raag Kalawati and ‘Tere Bina’ established Nurjehan’s credibility once again as a singer par excellence. True, the duet with Munir Hussain ‘Rim Jhim Rim Pare Phuaar’ was a catchy number and so was the child version being sung by Nahid Niazi and Najma Niazi but ‘Sagar Roye’ and ‘Tere Bina’ as I call them a twin treat given to melody seekers by Nurjehan stand out as one of her best offering.

“KALI KALI JAAN DUKH LUKH TEI CRORE VEI” — Akhtar Hussain Akhian who composed for Pakistan Television and Radio Pakistan in the far end of his career had initially ventured into composing music for Pakistani Film Industry. His first movie was ‘Paatey Khan’. It was a super duper hit mainly because of the songs sung and acted by Melody Queen Nurjehan. Songs like ‘Hokkey Mein Dainwan Gali Gali Wey Sanwal Meria’ and ‘Kali Kali Jaan Dukh Lakh Tey Karore Wey’ became street songs. Both of these songs had ‘hook’ (wail) in them; the former rendered on Nurjehan herself when she looks for her beloved in the street. The song ‘Kali Kali Jaan Dukh’ stands out because of pathos and melody. In the programme ‘Apni Dhun Main’ Akhian introduced variations in notes that link Ashtai with Antra. Indeed this is Nurjehan’s one of the best Punjabi numbers.

“SAJNA RAAH TERA” — I have written in my book Melody makers, ‘The song that was full of sadness by Nurjehan that captivated me for years were composed by music composer Master Abdullah. This song was ‘Sajna Raah Tera Tak Tak Haarian Dil Dei Mein Boohey Kholey Nainan Diyan Baarian’. The movie was ‘Jat Mirza’. Nurjehan has stated in one of her interviews that it was also one of her favourite songs. The ‘Dohra’ before the main song ‘Hunda Raat Da Jaagna Buhut Mushkil/ Yan Koi Jagda Pehredaar Raatie/ Yan Koi Jagda Ishq Di Taar Wala/ Yan Koi Jagda Dukhya Beemaar Raatein’ sets the pathos-tempo. I love this song. Actress Anjuman pictured this song that was well directed by the director as she roams and cries in the village in the middle of night with buffaloes in the backdrop.

“DANG PYAR DA SEENE TEI KHA KEI” — as per my humble assessment the best song was ‘Dang Pyar Da Seeney Tei Kha Ke’ by Nurjehan well pictured in a sad sequence by Neelo in the film ‘Laado’.What mesmerized me was Neelo’s enchanting acting and Master Abdullah’s songs. Neelo’s natural acting surpassed in a village backdrop pictured around a well and below a tree on Nurjehan’s song ‘Shiker Dopeher Pipli Dei Thaley Main Chankaniyan Wangaan’. This movie was released on August 26, 1966 and was directed by Sharif Nayyar. The producer was Safdar Masud and the lyrics were written by Hazin Qadri, Manzoor Jhalla and Mohan Singh Mahi. The support cast comprised Allauddin, Yasmin, Ragni, Rangila, Ilyas Kashmiri and Mazhar Shah.

“CHAN DEYA TOTEYA” — It was in 1951 that Nurjehan, after she had returned to Pakistan in 1947 decided to produce, act and sing for her movie ‘Chan Wey’ with music by Feroze Nizami. A good movie was expected from Shah Noor Productions. The song ‘Chan Deya Toteya’ established Nurjehan’s mastery in rendering sharp Zamazams. The present generation of singers try to mimic this song to establish their mastery over this trait of singing but naturally none among them come up to the mark.

I love the song ‘Hum Sei Badal Gaya Woh Nigahein To Kaya Hua’ sung both by Mehdi Hasan and Nurjehan separately for the movie ‘Dil-e-Betaab’.

I shall suffice only on one superb song pictured on lovely Asia with lyrics ‘Sajna Re Kyun Bheegey Torey Nain’ sung by none other than Nurjehan as one of my most favourites from the movie ‘Pehli Nazar’.

“AEI WATAN KE SAJEELE JAWANO” — the best of the best is the famous motivational song ‘Aei Watan Kei Sajeele Jawano’ rendered by Nurjehan during 1965 war with India. All the passion and emotions of love of our country is behind the music composition, lyrics and rendering.

It is a very difficult proposition to fins tern representative songs of a singer of the calibre of Nurjehan whose all songs are her representative songs. There may be many others better than the ten given in this discourse but the idea is to wish her happy birthday and introduce her to the younger generation!