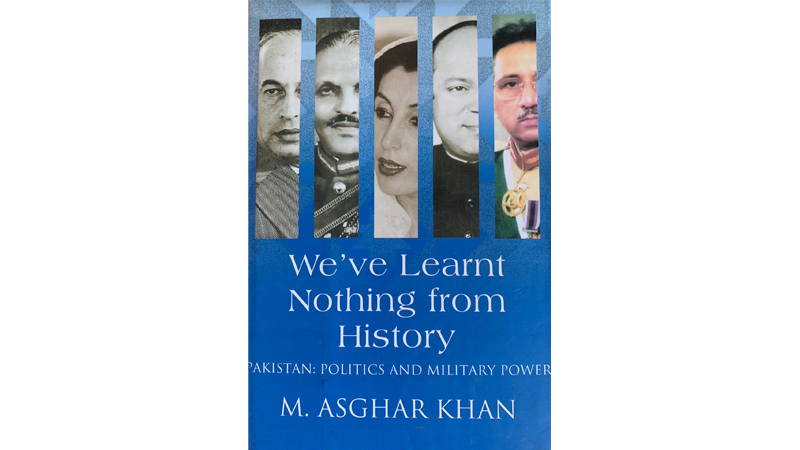 In 1957, at the age of 36, Asghar Khan became the first native commander-in-chief of the Pakistan Air Force (PAF). He built the superb air force that went to war with India in the war of 1965 and gained complete mastery of the skies.

He had retired from PAF just months prior to the initiation of hostilities and taken over as the managing director of Pakistan International Airlines.

When war broke out, he was asked by president-Field Marshal Ayub Khan to visit China and secure vital military supplies.

At some point he fell out with Ayub and founded a political party. Later his party joined eight other parties and formed the Pakistan National Alliance to unseat the Bhutto’s Pakistan People’s Party in 1977 which had acquired dictatorial powers. Unfortunately in the nationwide rioting that followed the allegations of widespread rigging in the general elections, the army headed by General Zia ul Haq seized power and despite its assertion that it would only stay in power for 90 days, it went on to rule the country Zia died in a plane crash in 1988.

Asghar Khan went on to write several books including a strident critique of the 1965 war, “The First Round.” In 2005 he wrote a book with an even more damning title, “We’ve Learnt Nothing from History.” Heargued that all of Pakistan’s wars with India had been fought with just one objective in mind: how to quickly reach a cease-fire.

The book touched upon many topics that continue to be relevant today: Kashmir, nuclear weapons and defence spending.

He said that the Kashmir dispute had “bedeviled Pak-India relations for over five decades,” and that there was no end in sight. Today, over seven decades have come and gone and still there is no end in sight. He asked Pakistanis to examine the causes of the conflict and to engage in introspection. Only then would they realize that they too were at fault, and not just their arch-nemesis, India. He said only then would Pakistanis arrive at “a realistic appraisal of the situation.”

He said fifty six years had “been spent in futile political debates and equally futile diplomatic efforts to convince the world that India should be forced to honour its commitment to hold a free and impartial plebiscite in the state according to the UN Security Council’s resolution. By now, we should have been convinced that no plebiscite will ever be held.”

Talking about potential solutions he said while India would probably “recognize the cease-fire line as an international border” no government in Pakistan could possibly consider such a solution. Was there a better solution?

Surprisingly, he came up with a solution which is unlikely to be acceptable to either country: “The only solution to the problem is to recognize the state of Jammu and Kashmir as an independent country.”In my view, this is just as unrealistic as trying to hold a plebiscite in Kashmir or fighting a war to wrest it from India.

But the Air Marshal was perceptive when he noted that both countries would do well to consider what happens if the dispute which has spawned wars and violence lingers on. He noted that unless the two siblings can find a peaceful resolution of the dispute, a grim future awaits. There will be “continuous strife between the two countries and a rising tide of killings…an unending arms race” with “both spending billions in purchasing aircraft, ships, missiles and expensive arms.”

With unusual clairvoyance, he noted: “If we persist in our folly we, the people of the Indo-Pak subcontinent, will before long destroy ourselves either by self-inflicted misery and hunger and, if not by these, then by the use of nuclear weapons, accidentally or intentionally, in which we appear to take so much pride.”

When war broke out, he was asked by president-Field Marshal Ayub Khan to visit China and secure vital military supplies

Then he turned to the nuclearisation of the subcontinent in 1998. He made a statement that no one else could make without risking being branded a traitor or an agent of RAW, CIA or Mossad, “I believe that, with an unsatisfactory international situation with India, Pakistan would be more secure without nuclear weapons.”

He laid out a very logical argument: If Pakistan got rid of its nuclear weapons and invited international experts to validate that it had indeed become a nuclear weapons-free zone, India would be unable to use its nuclear weapons against Pakistan. “Because of its heavy investment in maintaining a large nuclear capability, India’s capacity to maintain a large conventional force at the same time would be limited. That itself would give greater security to Pakistan which should review its concept of defence.”

He suggested that Pakistan focusing on fighting a defensive war using conventional weapons: “Pakistan should maintain an effective air force with reasonable armoured strength and should cut down drastically the defence expenditure on its regular land force.”

He said that Pakistan should have a large reserve of trained manpower which would be called up periodically for refresher training. The reserve forces would be spread out over the entire country along with ammunition depots. The forces should be capable of rapid deployment in 24 hours.

If Pakistan did so, not only would its defence be strengthened but it would be able to cut its defense budget drastically. This would allow “wasteful and totally unnecessary expenditures” to be cut down. By so doing, the air force commander, a veteran politician who had devoted his post air force life struggling for democracy, a man who had published widely, and a man whose patriotism was beyond reproach, commented: “Our defence would be greatly strengthened at far lesser cost.”

Asghar Khan was also realistic about the probability of such a situation being reached. He said it was sad that the few people who run the country, or those who are aspiring to come to power, “will have the courage to face facts and accept reality. It is more likely that they will continue to misguide the people and lead the country towards greater misery and possible destruction.”

He passed away last year at the age of 97. One hopes that his wisdom will inform the decisions being made today by those who are at the helm in Pakistan.