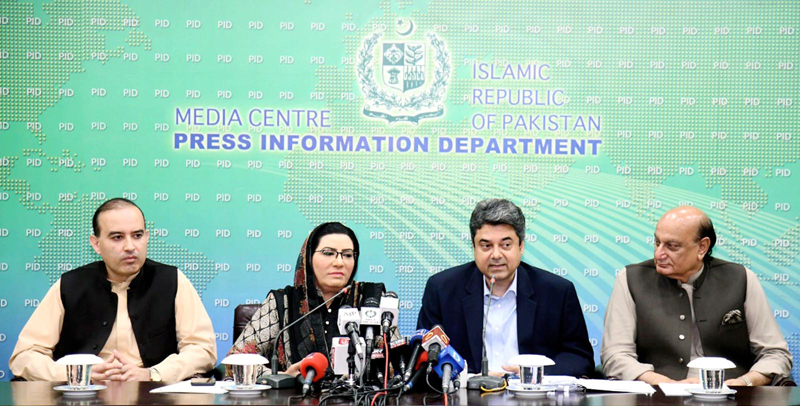 Federal Minister for Law and Justice Barrister Farogh Naseem Saturday said nobody will be allowed to divide Sindh, adding that Karachi cannot be separated from the province.

Addressing a press conference alongside Special Assistant to PM on Information and Broadcasting Dr Firdous Ashiq Awan, Punjab Law Minister Raja Basharat and KP Law Minister Sultan Khan, Barrister Naseem said the enforcement of Article 149 of the constitution will only empower and strengthen the local government systems in place across various provinces. “It is not a matter to be considered controversial in any way. First, I will advise everyone to read Article 149(4) of the constitution. There is nothing controversial in it … except the provision to empower a local government, and there is a mechanism to dovetail it with Article 140A,” he said. “And it won’t be for Karachi alone. If the recommendation made by the federation proves successful, it will light the way for other cities of Sindh, Punjab, KP and Balochistan,” he added.

The law minister clarified that the enforcement of Article 149 is not meant to create any divide between Karachi and Sindh. “We ourselves have avowed not to let Karachi segregate from the rest of the province,” he said.

The law minister said promises for speedy and cheap justice made by the PTI government are being fulfilled. He said reforms in the country’s existing laws will bring revolutionary changes for provision of speedy justice. He said Punjab and KP are on the same page with federal government about such reforms whereas Sindh and Balochistan will soon be taken onboard.

The minister said the Code of Civil Procedure (Amendment) Bill, 2019, will reduce civil litigation period to maximum two years. He said reforms in NAB laws are also being introduced in which better class in jails will not be provided to those accused of over Rs 5 million embezzlement.

He said for securing women rights, women ombudsman has been empowered which will exercise enforcement and policing powers to restore the possession of ownership to women. In addition, he said, the letter of administration and succession certificates bill will authorise NADRA to issue succession certificate within15 days. He said a law is being introduced for the protection of whistleblowers and a whistleblower protection and vigilance commission is also being established.

Dr Firdouis Ashiq Awan said Prime Minister Imran Khan is trying hard to bring out the country from an archaic system and for the purpose, various reforms in existing laws are being introduced as well as new laws are also being formulated. She said the government is taking affective steps to address the challenges being faced by the country, adding that all the institutions are working to implement the prime minister’s roadmap.

Dr Firdous said democracy and society cannot be completed without the role of the opposition, and pointed out the Indian media for bouncing the negative or less role of Pakistani opposition which is causing damage to the Kashmir cause. “Every Kashmiri is looking towards Pakistan against the Indian atrocities. Opposition parties should have to be at the same page for Kashmir cause as it was far beyond the personal and political agendas,” she stressed.

She said that Prime Minister Imran Khan has exposed the real face of India to the world and urged the opposition to play a positive role in this regard. “Whoever denied the Pakistan’s statement over Kashmir cause will be out of the politics forever,” she added.

To a question, Raja Basharat responded that reforms are needed in Punjab Police culture and that steps have been taken in this regard.