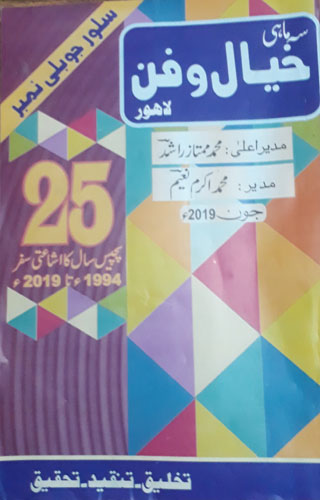 The literary magazine Kheyal-o-Fun completed 25 years of its publication in 2019. It started being published simultaneously from Lahore and Doha in 1994 onwards due to the untiring efforts of Muhammad Mumtaz Rashid (who added the surname Lahori on return to Pakistan), an engineer by profession but a writer cum poet by passion. Presently he is settled in Lahore’s literary activities after spending three decades in Doha. Rasheed Niaz Garewal, a literary figure in Doha but now back in Sialkot writes that in the backdrop of literary circles in Doha, merely the idea of the advent of literary magazine ‘Kheyal-o-Fun’ was no less than a bomb blast. In 1991 when announcement was made, many welcomed this idea but many more thought it be a dream of a mad man (Page 35). Even some close friends termed it as a viral fever, a passion that would die down once the fever was down. Mumtaz Rashid did not lose heart and started collecting material to publish a quarterly journal. Abroad one has more spare time but back home in the jungle of literary people around you, one gets caught in a web of problems. Mumtaz’s resilience and character overpowered these problems and he has become part and parcel of local literary circles which is an impetus for him to continue his magazine’s publication on regular basis.

In my review on Mumtaz Rashid’s collection of poetry ‘Kuliyaat’, it was observed, “Mumtaz Rashid had dedicated his book ‘Kawish’ to the immigrant poets who while living abroad are keeping the lantern of quality poetry alight. The present version is an improved version whereas the poet has perked up some of the couplets. In one of the Ghazals sermons on character building are projected. On page 202, it says ‘Dushmanon Sei Guraiz Kei Bawasf/Doston Ki Panah Sei Bachiye’ (stay away from enemies and also from protection of friends). It reminds this reviewer of two very important quotes of Hazrat Ali Eleh Salam on this subject. One is ‘be moderate in your love for a friend or hatred for an enemy. The former may turn into an enemy and the latter may turn into a friend’ and the other is ‘evil persons trace the shortcomings of people and forget their good qualities, like flies that frequent dirty places'”.

Iqbal’s ‘Jawab-e-Shikwa’ is the selection for the present issue of the magazine, the couplet of which ‘Ki Muhammad Sei Wafa Tu Nei Tau Hum Tere Hain/Yei Jahan Cheez Hei Kaya Lawh-o-Qalam Tere Hain’ (It You are faithful to Muhammad (Salalah-o-Elleh-e-Wassalam) we are Yours. What to mention this universe, the pen and papers are Yours) _ Page 8) is quoted. Islam Azmi, on Page 25 gives a realistic picture of zero support available for publishing a literary magazine; lack of government support, annihilation of private libraries in streets of the city, no advertisements etc. In this scenario he praises Mumtaz Rashid Lahori for the continuation of the publication of his magazine. Islam Azmi is a satirist when he writes an Inshaiya (short essay) titled ‘Outsider’ – Page 53. He says that he remained an outsider when he had to study science subjects in English and literature in Urdu languages. While going for a walk he remembered an essay in his school book titled (on going for a walk). He recalled going to meet Shahid Shaidai but used to come across Salman Butt instead, the latter mentioned that Dr. Wazir Agha was sitting there a while ago. He had left a copy of ‘Auraq’ for Islam Azmi. Dr. Agha did not know that Azmi resided abroad and since he was not seen in Lahore’s literary circles, he thought that he was a fictitious person! Later Shahid Shaidai mentioned that it was not Agha Saheb who would pass such remarks. Salman Butt had created the story himself. Islam Azmi is good at writing humour. His essay titled ‘Shugrana’ on Page 78 makes humour out of a person who is diabetic but takes six spoons of sugar in a cup of tea!

Two short stories of writers from outside Lahore have been included, the first one is titled ‘Banjh’ by Irum Hashmi from Sahiwal and the second one titled ‘Gogi’ by Tamseela Latif from Rawalpindi. An excellent theme and language has been used by Irum for her short story that revolves around a woman who has born eleven chilldren who make her life hell; shouting, quarrelling and what not. A social worker Bilqees is a frequent visitor to the area. The woman starts suspecting her of flirting with her husband till the day she discovers that she could not bear children. That was the day she gladly cooked ‘Pooris’ for all her kids! Irum Hashmi’s name has been mentioned as from Sahiwal in the contents but from Mianwali in the main text – Page 69. Needs clarification from the editor