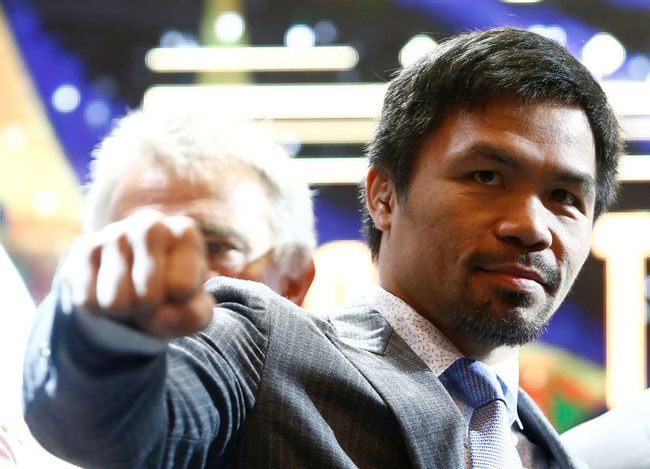 If he gets his way, Filipino senator and boxing champion Manny Pacquiao would have drug criminals executed by firing squad.

That’s getting closer to becoming a reality in the Philippines, where in the past seven weeks, 21 bills have been filed before the lower house and Senate to reinstate the death penalty, collectively covering crimes ranging from drug trafficking and plunder to kidnapping, rape and murder.

It comes at the behest of President Rodrigo Duterte, the popular, self-styled “punisher”, notorious for his crackdowns on crime, and a war on drugs that has killed thousands of mostly poor, urban Filipinos.

Pacquiao, a staunch Duterte loyalist and the only boxer to win world titles in eight divisions, believes executions are the best deterrent for big drug syndicates.

“We need it. In Asia, we are one of the few countries without a death penalty, so a lot of drug lords, pushers came in. It is alarming,” said Pacquiao, who enjoys rock-star appeal among Filipinos, and is being touted as a future president.

“If you ask me, firing squad,” he told Reuters, when asked how they should be dealt with. “But it depends on what the people want, as long as death penalty is imposed.”

But it isn’t clear if Filipinos actually want capital punishment.

Though opinion polls put Duterte’s approval rating consistently above 80%, the same surveys reflect mixed views on his policies, including a poll 11 months ago that showed less than a third of Filipinos agreed with reviving the death penalty.

Human rights groups say reinstating it counters a clear global trend of moratoria on executions or abolition of capital punishment, and goes against a United Nations covenant against the death penalty that the Philippines signed.

That matters not to Duterte, who has repeatedly said he favours hanging criminals, as many as 20 per day.

Most of the 21 bills have not prescribed a method of execution.

From 1950 to when capital punishment was abolished in 1987, the electric chair was used. The death penalty was restored in 1993, using lethal injections, then scrapped again in 2006, with 1,230 convicts taken off death row in what Amnesty International called the biggest commutation of its kind.

If Duterte’s drugs crackdown continues on the same scale and the death penalty is reinstated covering “heinous crimes” – including piracy, kidnapping, murder, treason and violent robbery – death row could potentially consist of tens of thousands of people, going by current numbers.

In the country’s largest prison, two-thirds of the 27,756 population are serving sentences for heinous crimes, according to the corrections department.

But the biggest problem, activists say, is the strain Duterte’s drugs war is putting on an overstretched criminal justice system now being pushed to breaking point.

Under Duterte, police made 193,000 drug-related arrests, but many cases were thrown out or resulted in acquittals. Less than a third of drug cases in 2016 and 2017 led to successful convictions, according to the National Prosecution Service.

Duterte’s opponents say the chance of miscarriages of justice are greater now than when capital punishment was last used. From 1993 to 2004, 72% of death penalty verdicts reviewed by the Supreme Court were overturned, sparing 677 people.