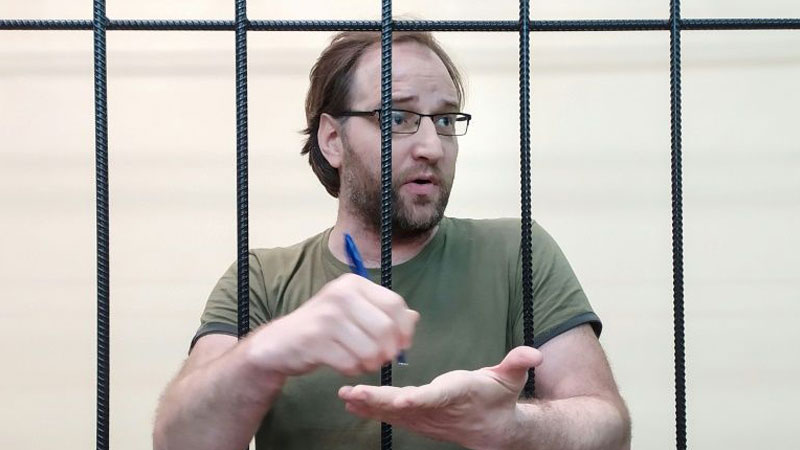 When anti-corruption activist Yevgeny Kurakin went to make an official complaint about authorities destroying a park in his sleepy town near Moscow, he was arrested in the prosecutor’s office. Three months later, he is still behind bars.

Kurakin regularly denounces the corruption of officials in Reutov — a city of some 100,000 in the Moscow region where he lives. He had planned to run in Sunday’s local elections.

Russian authorities have cracked down on mass protests calling for the elections to be free and fair, while the arrests of high-profile activists like Alexei Navalny have made international headlines.

But Kurakin has gained little attention, despite languishing in jail on fraud charges his family say are fabricated.

Investigators say the 42-year-old ran an embezzlement scheme in his apartment block through which he stole three million rubles that were supposed to go on building works and communal services.

Kurakin’s neighbours have stood by him, with 132 of them signing a letter saying the accusations are false.

Kurakin has exposed the controversial links between the city’s former mayor Alexander Khodyrev and a local real estate developer, TsentrStroy.

According to him, the alliance turned Khodyrev into a millionaire — allowing him to buy several villas, some exceeding 20 million euros ($20 million).

“He’s a very uncomfortable person for the authorities,” his wife Zhanna Bass told AFP. “He exposes the crimes that they commit.”

Kurakin’s case, lawyers say, is not unique. They say local authorities throughout the Moscow region have used such tactics to silence their critics.

Khodyrev’s personal office refused to comment, saying only that he is now mayor of another town. The current administration of Reutov also declined to comment to AFP.

Kurakin’s arrest in June coincided with that of investigative journalist Ivan Golunov, which led to an unprecedented mobilisation of civil society which resulted in his quick release.

But there is little public pressure to release Kurakin or others.

“Yevgeny is not the only activist persecuted by the authorities in the Moscow region,” said Kurakin’s lawyer Dmitry Trunin.

He said he could name “dozens” of names.

But he said the cases often have “no resonance and these people are left alone to face the local mafia.”

The exact number of Russians jailed on trumped-up charges are difficult to estimate. A study published in April by US law firm specialising in human rights Perseus Strategies, Russia has at least 236 political prisoners — a figure that has risen in recent years.

Kurakin already spent 16 months in pre-detention under the same charges in 2015 before being released on bail. At the time, his case was returned to the prosecutor’s office due to a lack of evidence.

His wife said the second arrest came after he announced his candidacy in the local elections with the Yabloko opposition party.

“The aim is to find someone guilty of fraud so that authorities can say they are not corrupt because those accusing them of corruption are crooks,” said another lawyer Dmitry Sotnikov.

Kurakin’s lawyers have challenged the conditions of his arrest but the case has dragged on.

Valery Borshchyov, the co-chairman of Moscow’s Helsinki Group and a former Soviet dissident, said the investigation was taking place in an atmosphere of “absolute lawlessness.”