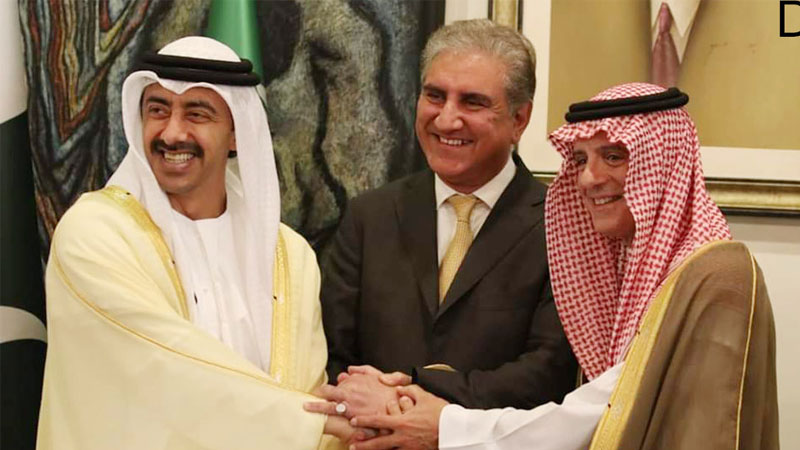 Prime Minister Imran Khan on Wednesday said the international community has the responsibility to urge India to halt and reverse its illegal actions and aggressive policies and postures in Held Kashmir, adding that Saudi Arabia and the UAE have an important role in this regard.

While talking to Sheikh Abdullah bin Zayed Al Nahyan, foreign minister of the United Arab Emirates, and Adel Al Jubeir, minister of state of Kingdom of Saudi Arabia, who called on him here, the prime minister highlighted Pakistan’s deep concern over the worsening human rights and humanitarian situation in Kashmir because of the month-long complete lockdown and communications blackout in the occupied territory.

The prime minister focused on the situation arising from India’s illegal and unilateral actions in the occupied valley and stressed the importance of immediate lifting of curfew, removal of restrictions on movement and communications, and respect for the fundamental rights of the Kashmiri people. He further underscored that India’s actions are a clear violation of UN Security Council resolutions and international law. “There is a genuine fear of a false flag operation to divert the world’s attention from India’s illegal actions and intensified repression of Kashmiris. India’s actions have created grave risks for peace and security in the region,” he added. The visiting dignitaries said they are visiting Pakistan at the directives of their leadership. They reaffirmed the strategic significance of the relationship of Kingdom of Saudi Arabia and the United Arab Emirates (UAE) with Pakistan. They also acknowledged Pakistan’s role and efforts in promoting and maintaining regional peace and stability. They fully understood the anguish of the people of Pakistan over the recent developments and were concerned over the worsening humanitarian situation in the occupied valley. Both the dignitaries vowed to remain engaged to help address the current challenges, defuse tension and promote an environment of peace and security. Earlier, Saudi Arabia’s State Minister for Foreign Affairs Adel Al-Jubeir and Foreign Minister of United Arab Emirates Sheikh Abdullah Bin Zayed Bin Sultan-al Nahyan held a meeting with Foreign Minister Shah Mehmood Qureshi and discussed the current situation in Jammu and Kashmir in the wake of India’s move of repealing the valley’s special status.

The meeting took place at the Foreign Office soon after the arrival of the Saudi and Emirati dignitaries here on a day-long visit. Prior to the delegation-level talks, the three foreign ministers warmly shook and raised hands in front of cameras as a gesture of unity among the three nations.

The visit is taking place after Prime Minister Imran Khan recently held telephonic conversation with the crown princes of Saudi Arabia and the UAE.

Also, the Organisation of Islamic Cooperation (OIC) – of which Saudi Arabia and the UAE are important members – has given a clear message on the ongoing human rights violations in the occupied valley after India abrogated the Article 370 of its constitution.