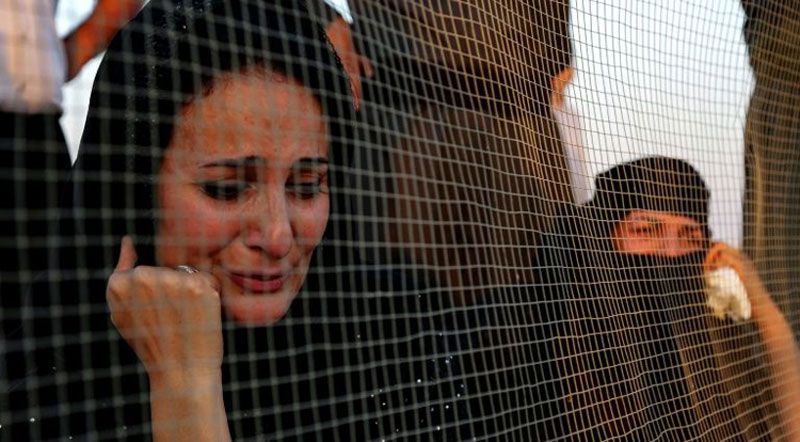 The table running across Samya Khasro’s living room wall is a shrine to the missing: flickering candles and fading photographs of her 26 Iraqi relatives who vanished 35 years ago.

Khasro, who hails from a once-persecuted Shiite Kurdish minority, says her family was gutted by the disappearance of so many loved ones — and the anguish of not knowing their fate.

“We’re still waiting. The day we get their bones, only then can we say they died,” says the 72-year-old.

The 26 are Khasro’s siblings, in-laws and their children. Across the broader family, more than 100 remain missing.

Iraq is one of the countries with the highest number of missing or disappeared persons, according to the International Committee of the Red Cross (ICRC).

The numbers range between 250,000 and well over a million, a discrepancy indicating both staggering loss and the difficulty of documenting such cases.

They have accumulated across decades of instability, beginning with ex-dictator Saddam Hussein’s practice of executing and forcibly disappearing his opponents en masse.

Saddam’s Iraq fought a deadly war with Iran in the 1980s and between 1987-1988 carried out the ruthless “Anfal Operation,” which is thought to have killed some 180,000 Kurds. His forces also targeted the ethno-religious minority of Shiite Kurds, with many jailed in secret, forcibly evicted from Iraq or simply snatched off the street.

Khasro, a former parliamentarian who spoke to AFP in her Baghdad home, believes that’s how her family was shattered. “Did I tell God to make me Kurdish? Or to make my birthplace Iraq? Or make me Shiite? It’s not my fault, it’s inherited — so how can I be punished for it?” she asks.

‘Nothing but his wedding band’

Virtually every family in Iraq has been touched by a case of enforced disappearance and its seemingly endless grief.

Khasro’s husband Saadoun has not seen or heard from one of his brothers since they were young men, and another left Iraq 45 years ago, fearing persecution.

As they age, Khasro fears the answers her family has sought will be buried along with the older generation.

“We’ll go eventually. But will the grief of those who come after us be the same as our grief?” she asks.

Iraq has made some progress in its missing case files in recent months, uncovering several mass graves dating back to the Anfal campaign and the 1991 Gulf War over Kuwait.

But families have expressed frustration that the scale of the work dwarfs the government’s allocated resources.

“Even the director of mass graves has zero dinars allocated to him. At this point, we’re betting on support from international organisations,” says Khasro. Chief among them is the ICRC, which advocates on behalf of the surviving families and helps hand over exhumed human remains for identification. “Our message to the government is that these families need more support, so this file can eventually be closed one day,” ICRC spokeswoman Salma Awdah told AFP.

More than 250 kilometres (150 miles) north of Khasro in the province of Kirkuk, another family lives in similar pain.

Ronak Mohammad, 63, has not seen her husband since he was drafted as a reserve soldier in 1982.

“He left the house, and now I’ve got nothing except his wristwatch and wedding band,” says Mohammad, who has no information of his whereabouts, much less a death certificate.

The mother of three now lives in a residential complex in Kirkuk that hosts families who are missing loved ones.

Flipping through a thick album of black-and-white wedding photos, she says her youngest daughter was just 20 days old when her father left.

“She doesn’t know her father. She just has these pictures, and he visits her in her dreams,” Mohammad says.

Zainab Jassem suspects her mother, Bushra, was kidnapped by IS in 2014 on her way back from a town about an hour away. The two worked as seamstresses, and Bushra was on her way home after delivering clothes she had tailored to customers.

But jihadists stopped the bus she was riding and forced the passengers off, accusing them of spying.

“They called us and asked if my mother was passing on information,” says Jassem, who has not touched her sewing machine since her mother’s disappearance.