Muharram and the Walled City

* Where inside every street and mohallah, you see a mosque or remains of a temple or Gurdwara, you will also see an Imam Bargah 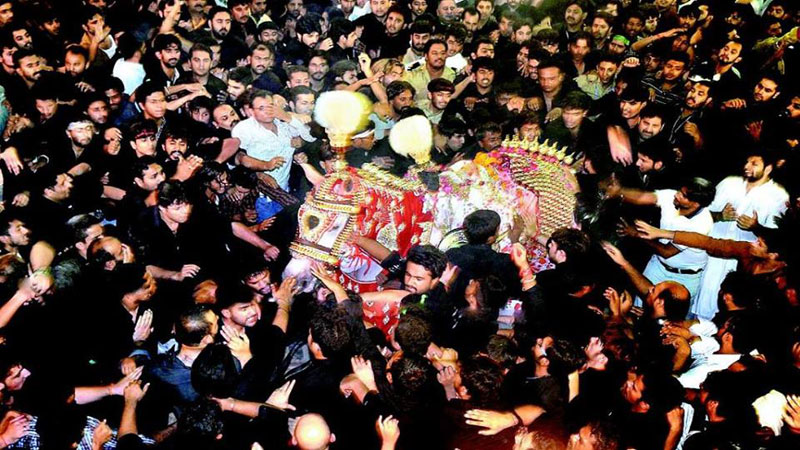 Where inside every street and mohallah you see a mosque or remains of a temple or Gurdwara, you will also see an Imam Bargah. This also shows the religious harmony which this city has. This harmony is still seen today in the city when all the Sunni and Shia Muslims join the processions, Majalis and then set up Sabeels ( free food stalls) during the procession days of Moharram. I don’t see this harmony in other parts of Lahore and I think we all must learn a lesson of brotherhood and harmony from the people of walled city of Lahore.

According to various surveys, there are more than 367 Imam Bargahs in the walled city of Lahore. Some of them hold the historic importance and many have been established with the passage of time. You will find ages old Imam Bargahs inside Mochi Gate and its Mohallah Shian, Taxali Gate, Bhatti Gate and Lohari Gate.

During the month of Moharram you will see a unique spiritualism and mysticism in the streets of these gates and mostly you will find people (both male and female) wearing black. You will come across Majlis in different streets and would see people reciting Nohas and Manqabat. This is a matchless scene and such determination and fervor is not seen anywhere else in the modern Lahore. Yes let me mention here that most of the people from greater Lahore go to walled city Lahore for joining the Moharram processions and Majalis.

The oldest and world famous Imam Bargahs Nisar haveli and Mubarak haveli are also here in the walled city whereas the Imam Bargahs in Begum Mubarik Haveli, Haveli Alif Shah, Mai Eidan courtyard and few others cannot be ignored too as they are flooding with mourners in Moharram. You will see Zuljanah and Tazia in the streets of the city and people paying respect to them irrespective of caste, color and creed.

Let me tell you that the most important havelis which are world famous, Mubarak haveli and Nisar haveli, inside Mochi gate, are located adjacent to each other. At one time both these havelis were one property owned by a single family. Later as the property got divided between the family these became two different havelis but their identity regarding Moharram remains the same till today. According to the historic references the Nawab of haveli had come from Azerbaijan to Lahore through Afghanistan. As Mohalla Shian Kashmirian had more Shia community than other parts of walled city and gradually the Mubarik Haveli and later Nisar Haveli both attained the status of the main gathering places during Moharram. The main ziarat and procession of Moharram comes out from these two havelis.

Another important Imam Bargah is the Haveli Alif Shah which is located inside Delhi Gate and is said to be three hundred years old. Every year the procession and Zuljanah is taken out of this haveli and after following a two hundreds year old route they reach Karbala Gamay Shah.

According to various surveys, there are more than 367 Imam Bargahs in the walled city of Lahore. Some of them hold historic importance and many have been established with the passage of time. You will find ages old Imam Bargahs inside Mochi Gate and its Mohallah Shian, Taxali Gate, Bhatti Gate and Lohari Gate

Another Haveli known as Begum Mubarik Haveli is inside the Bhatti Gate and the Imam Bargah was named after the wife of Syed Maratab Ali, a renowned personality during the British era. A part of the Haveli is converted into an arts school called Naqsh Art School and the remaining part of the haveli is still an Imam Bargah which is now owned by Syed Babar Ali.

It is said that the processions of walled city Lahore are the biggest in South Asia. The Taazia, Alam, Jhoola and other Shabeeh are made by the metal workers sitting inside Lohari’s Chowk Jhanda and as the Moharram is approaching the start getting the orders. Most of these items are made in pure silver and other metals are also used. The costs of these items ranges from very low to higher end and all can afford these.

The entire year people look after the Zuljinah which is a horse and considered as a Shabeeh of the horse of Hazrat Imam Hussain. The people owning Zuljinah look after it in an extraordinary manner and the best food is given to it. All around the city you will see healthy and huge Zuljinah during Moharram.

Most of the Bazaars and restaurants remain close during the procession days of Moharram which usually starts from the 8th of Moharram. This culture is only seen in the walled city with this spirit. In the past, it is said, that the Hindus and Sikhs also participated in the Majalis and processions and setting up Sabeels was also set up by them. According to historic references, known Hindus and Sikhs like Lala Mela Raam and Bhai Jawahar Singh used to set up Sabeels inside the walled city Lahore.

The first Moharram procession in Lahore goes back to 1800s. It is said that Syed Ghulam Ali Shah, popularly known as Gamay Shah, had started a mourning march from Mochi Gate in the company of a very pious woman Mai Aghia. When Gamay Shah and Mai Aghia started their journey with tears and mourning the people made fun of them and their complaint was sent to the Maharaja Ranjeet Singh who was the ruler of Punjab in those days. Upon hearing a strange complaint about crying and mourning of these two persons, the Maharaja called Gamay Shah to the royal court and punished him by putting him into the dungeon inside Lahore Fort. A strange thing happened to Maharaja when he couldn’t sleep that night because of nightmares and unknown fears. The next morning he along with his courtier Faqir Syed Aziz ud din went to Gamay Shah in the dungeon and asked him the reason of his march and mourning. 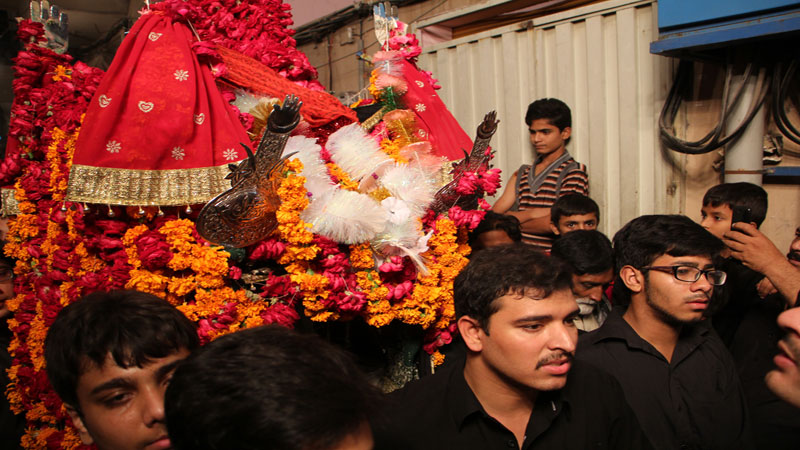 Gamay Shah questioned Maharaja that could he overcome the grief of losing his Guru and other people who were killed by the Mughal Emperor Aurangzeb Alamgir, on which the Maharaja said at once said no. Then Gamay Shah replied to Maharaja that how could Gamay Shah forget the violence and brutalities of Yazid towards the Grandson and Family of the Holy Prophet (PBUH). He said that the procession was meant to express sadness and grief over the martyrdom of the Holy Prophet’s (PBUH) Family and His Grandson Hazrat Imam Hussain.

The Maharaja understood that matter and apologized from Gamay Shah and ordered to release him at once. That was the time when the respect of Gamay Shah augmented and the small procession changed into a bigger one where different people of different religions started joining in.

Mai Aghia a pious lady of Mochi Gate also joined Gamay Shah and so this tradition developed in Walled City of Lahore. It is said that after a year of this incident Gamay Shah passed away and was buried at the same place where he lived and meditated. Later the place was made as Karbla Gamay Shah when Nawab Ali Raza Qazalbash and Sir Nawazish Ali Qazalbash purchased the land. A Shrine of Gamay Shah was made there and rest of the place is Imam Bargah. Till now the Qazalbash family is looking after the Karbla Gamay Shah. This place is hard to access during Moharram processions as all the processions from all over Lahore end up at this place on 10th of Moharram.